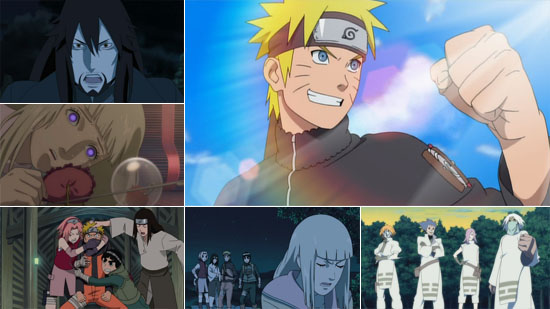 It was back in the summer of 2010 that we first got our hands on the original Naruto Shippuden movie on DVD - now, thanks to its availability exclusively in a double pack with film number two, Bonds, we get to revisit this outing in all its High Definition glory.  Has an orange jump suit ever looked more vivid?

Never mind the crystal clear imagery and colours, the movie wastes no time in delivering a huge shock - is Naruto really dead?  To avoid this becoming the shortest movie in history, we're soon assured that our titular hero is well and truly alive, for now at least.  We discover this in the face of a threat to the lives of all and sundry, which comes courtesy of a man named Yomi and his group of decidedly creepy ninja, as they seem to awaken the spirit of Moryu to create a new, all-powerful kingdom ruled by Moryu himself and his Ghost Army.

So far, so generically sinister.  As this Ghost Army begins its march across the land, our focus shifts towards the only person who can stop Moryu from fully enacting his devious plan - a shrine maiden and priestess from the Land of Ogres (although they seem to be all out of ogres for some reason) who has the knowledge and ability to seal Moryu and his power.  This leads us to the mainstay of the film - a race to the requisite sealing shine between Moryu and Princess Shion, with latter accompanied by a team of Leaf ninjas comprising of Neji, Sakura, Rock Lee and, of course, Naruto.

It's when Naruto and company meet up with Shion that we gain some context to that scene of Naruto's death, and perhaps more importantly we enter the all-out action segment of the film as the team serving as Shion's escort come under repeated attack from Yomi and Moryu's own ninja team - a group with some impressive tricks up their sleeve that will test our group of heroes abilities and judgement to their fullest.

Thankfully, while major battles in Naruto can be long-winded and surprisingly verbose affairs, the short running time of this theatrical outing means that action sequences are concise, swift and well-paced to offer up a number of enjoyable and impressive battles that never outstay their welcome.  Admittedly, there are few surprises or unexpected twists offered up during this portion of the film, but it's pretty enjoyable popcorn entertainment nonetheless even if you aren't massively enamoured of the Naruto franchise.

It's only towards the end of the movie where things become a little long-winded, with flashbacks and the like puncturing and deflating some of the tension and atmosphere of the final events which bring the film to its climax, although thankfully this is offset somewhat by providing a satisfactorily final ending to it all which leaves the film intact as a fun piece of stand-alone fare.

While Bonds, the second Naruto Shippuden movie, doesn't gain a great deal from the move to High Definition (it looks pretty awful regardless), this outing proves to be more impressive overall - it won't drop your jaw at any point, but the film as a whole is pretty well animated, and its Blu-Ray transfer is crisp and colourful to leave us with a good looking (and good sounding) movie overall.  Whether it's a worthy upgrade for existing owners of the film on DVD is a tough one to argue, but the absence of the subtitle issues we noted on the original DVD release here and the bump in visual quality may be enough to tempt you given that you'll also be picking up the brand-new second movie as part of this two-disc bundle.

Naruto Shippuden The Movie might not blow your mind, but in a sense it gets a lot right where its successor flounders.  In terms of its structure and layout, this could almost be a "greatest hits" of elements that its TV series gets right - cool characters winning the day against predictable bad guys with panache, and often doing so through sheer gutsiness and willpower alone against the odds.  If that isn't a description of a decent popcorn flick, then I don't know what is, and Naruto Shippuden The Movie proves pretty adept at providing some enjoyment while you much through the stuff.

English and Japanese 5.1 DTS HD Master audio with English subtitles.  This Blu-Ray release is otherwise free of any additional materials.

7
A simple but effective movie that leverages most of Naruto's best elements, given a very nice High Definition presentation for the first time to boot.
COMMENT AND DISCUSS
blog comments powered by Disqus