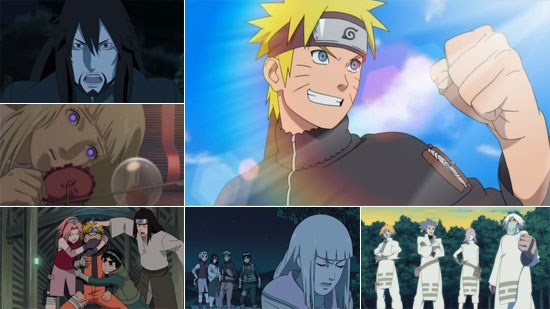 A film of a popular anime series? Who would have thought? But here we are and after only one DVD release too. For the most part, the past Naruto films have proven to be somewhat entertaining in their own right, especially when compared to some of the more questionable filler arcs of the series. So does this film keep the Naruto legacy burning?

The beginning of the film starts with Naruto’s death - while fighting some kind of strange purple dragon thing, our boy ninja hero gets impaled through the chest, culminating Naruto being given a funeral with Sakura, Rock Lee and Neji in attendance. Rewinding a few days before this, a man named Yomi and his team of ninjas raid a temple, with Yomi taking a strange being into his body to create a “Thousand Year Kingdom”. An undefeatable army of stone warriors goes on the march and Naruto and company are sent into action to protect the only person who can stop the army.

If there is one thing to say about the Naruto films is that they are generally much more interesting than the filler episodes that seem to infest the series every so often. At least with the films you know it is going to be wrapped up in an hour and a half, have improved animation and just generally prove to be a much better product. Sure, originality isn’t exactly the remit when the films are concerned as they follow the same pattern of introduce new character, they don’t get along with Naruto, he eventually gets them to warm to him and they both defeat the enemy of the film. Credits roll and job done.

What I was hoping for with the first Shippuden film is that they could possibly, ever so slightly, mix things up a little. Just a little bit? Well, no that hasn’t happened here - Naruto Shippuden the Movie follows the blueprint of films gone by and ends up so much like the previous efforts all you would need to do is think of the setting and which randomly interchangeable characters from the Naruto-verse you'd like to have appear and boom, you’re done. I did hope...

OK, the story isn’t going to be winning prizes for originality anytime soon, but thankfully it is at least somewhat entertaining. Yes, the priestess is a somewhat spoiled brat and yes, she does share Naruto’s tragic childhood upbringing, but it is actually presented in such a way that you don’t mind it so much. Shion the priestess is actually quite interesting for a film-only character, with the villains providing enough danger and destructiveness to make their fight scenes quite highly charged affairs. It is just a shame that as the ending comes streamrolling along, the bad guys seem to lose a lot of steam, with characters quickly being picked off and pairing up for their one-on-one fights. Naruto fans will no doubt recognise this type of story telling from one of the series major arcs.

On the plus side, the animation is well above what we see in the series. The 3D animation does work but it can be very easy to tell the difference between that and the standard 2D animation at times, breaking the viewer out of the world and looking at the stone figures as being entirely otherworldly rather than slumbering evil beings ready to march across the Earth. The regular cast sport their usual looks, while the film-only characters are a little lacklustre in the design department. Shion sports a very plan appearance for a priestess, but this is where the villains become more interesting with their varying designs between each "power level", for lack of a better term. If you don’t have the stomach for watching surgery on TV mind, you might gag a little at some of the scenes present.

Annoyingly, the film does suffer some technical issues which come in the form of the subtitles. I actually encountered two separate instances where the subtitles either lost their sync with who was speaking at the time or were completely missing altogether. This is during a period of heavy dialog, making the experience even more jarring with one half of a sentence appearing with the next disappearing. Hopefully this is a one time slip and won’t appear in future releases, but it is jarring none the less.

Baring the subtitle issues, Naruto Shippuden The Movie is entertaining in its own right. Naruto lovers will no doubt get far more out of this than the casual fan, but there is enough here to give even those casual Naruto fans something to watch when some free time presents itself. Just don’t expect to see anything too different from what has come before.

6
Technical issues and a predictable story make this film for Naruto fans only.
LATEST REVIEWS