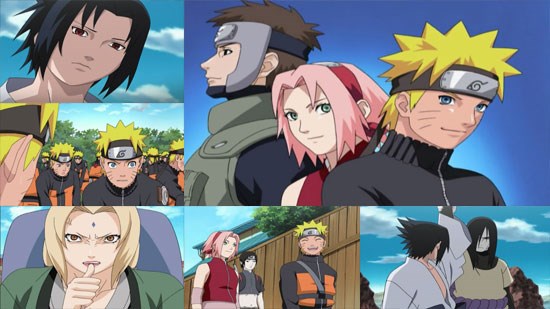 It has been a while since the last release of Naruto Shippuden, as Manga Entertainment has eased up on the speed of each DVD release. Personally I find it to be a breath of fresh air, as it gives us more time to digest the comings and goings of the series. So has the extra time helped the series regain it's strong start?

This batch of episodes includes the final instalment of season before charging headlong into season three. The first episode deals with the aftermath of the teams fateful encounter with the rogue ninja Sasuke. Following on from this we see Naruto starting his next set of training and so another training saga begins.

As often seems to be the case with a new season for Naruto, things start out somewhat slowly. The first episode is more about reflecting on the events of the last box set, whilst the main bulk of the reamining instalments are about the new story arc as Naruto explores the nightmares he is having and the training he is being put under. Whether these episodes will have any impact in the overall story is hard to say at this point, and while at times they do seem to drag they are not the worst we have come to see.

It must also be mentioned that the new character Sai has evolved into much more than a mere Sasuke replacement. The "emo" nature of Sasuke seems to have left Sai and he is more interested in bettering himself rather than constantly going on about revenge. He does still seem somewhat thin on personalty, but he is improving and some of these episodes help with that.

Everything else in this episode collection is quite standard. The animation is of the usual quality, as is the DVD quality itself, and the same goes for subtitles as well. Everything we have come to expect from a Naruto release is all here - just don't expect any bells and whistles.

As is the case most of the time with this series these days, if you are a Naruto fan then this set of episodes, while not the most exciting the series has to offer, will no doubt keep you entertained until the end. It just feels very no frills at times.

The extras are made up of the standard dual-language tracks, production art and other Manga Entertainment trailers.

7
Quite a no frills collection of episodes, but Naruto Shippuden remains entertaining enough.
LATEST REVIEWS