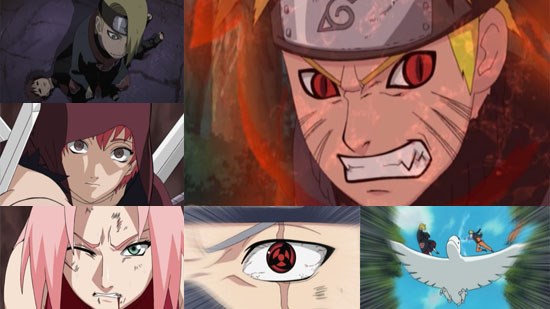 Old habits can be hard to stop. Naruto has just such a habit of stringing things along for far longer than it should. We’ve all been there for the ten episode fights, and with Box Set 2 there was a danger of the series falling back into its old ways. Can this newest box set stop a recurring trend from rearing its ugly head again?

The battle with Sakura and Chiyo against Sasori finally comes to an end. While Team Guy also bring their fight to its conclusion Naruto and Kakashi continue to confront Deidara, but with Naruto losing control will their victory come at a price?

This DVD set brings the first season of Naruto Shippuden to an end and without wasting any time we head straight into the next season. The first disc contains quite a mixture of drama, action and some scenes that will tug at the heart strings. If anything the opening episodes end one of the more epic battles of the series we’ve had so far before getting straight into the next batch of episodes.

Sakura and Chiyo’s battle is properly the most heart-felt, with Sasori coming across as a more tragic character, while looking at the past link between him and Chiyo does bring a little more emotion to the proceedings. The other battles are your standard fare with the psycho bomber Deidara and the attack of the clones with Team Guy. While these scraps are quite action-packed, they are also exactly what you’d expect from Naruto.

Even better, we have a new character added to the character roster. This character seems to be more of a replacement for the now missing in action Sasuke however - In fact their personality is pretty much the same as Sasuke's, just with a different character design. At the moment there isn’t much to give the new character a status among the group other than just acting as Sasuke’s replacement, but hopefully that will improve as the series continues.

For the Naruto fans Box Set 3 is an improvement over the lull of the previous disc collection, with storylines being wrapped up and the introduction of new and interesting elements to the already established canon. Things are moving at a brisk pace and apart from the odd episode that seems to feel the need to lace itself with comedy after a set of serious episodes, it seems like Naruto is back on form.

The usual array of uninspiring extras with production artwork, trailers and English and Japanese language dubs.

8
Improvements in pacing and characterisation make this a much better offering over the previous effort.
LATEST REVIEWS