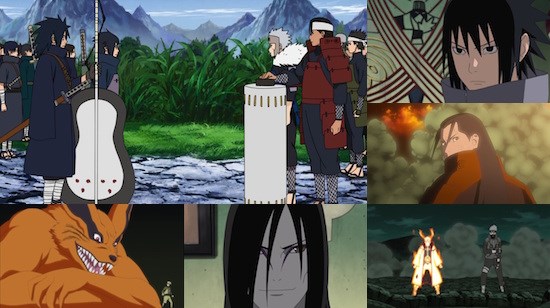 After the last box set’s leisurely sojourn into “The Kakashi Chronicles”, this one wastes no time at all in getting back to the matter at hand: The war is raging, as Naruto faces off against the seemingly unstoppable Marada Uchiha and his new pet ten tailed beast. Meanwhile Kakashi gets violently reacquainted with his old friend Obito, whom he was certain had perished some years previously. This establishes something of a minor pattern for the set, as the allied ninja forces fight for their lives against seemingly insurmountable odds. These episodes are thus littered with action as the opposing sides clash. Though it is not all about the events of the current war as flashbacks crop up frequently throughout this set and there are mysterious goings on back at The Village Hidden in the Leaves, involving Sasuke, Orochimaru and co.

At this point in time most of you probably imagine that you know well enough what to expect from Naruto Shippuden. However, some of these episodes hold a few surprises for even the veteran viewer. By way of example this set provides a great deal of previously unseen backstory for The Village Hidden in the Leaves, Madara Uchiha, and various of the previous Hokage, especially Hashirama Senju - The first Hokage. This new information is relayed via a large number of flashbacks littered throughout the set. You may recall we have previously complained about the overuse of flashbacks in Naruto Shippuden. However, here they are largely imparting new and interesting information, as such they sit a lot more comfortably within the series as a whole. There are also some big dramatic moments to be found in this set, which are likely leave long term Naruto fans reeling. We even finally learn the condition of the five current Kage, whose situation had seemed dire when we last saw them.

To say too much more would risk spoiling what is one of the most interesting Naruto Shippuden box sets for some time. The action on display here is top draw, and some of the best in the series to date. Similarly the drama here rivals even some of the series most memorable dramatic moments, such as the death of Jiraiya. Animation and soundtrack wise it is par for the course and exactly what you will have come to expect from Naruto at this point in it’s cycle. So, when all is said and done this is a box set which represents some of the best Naruto has to offer, and long term fans in particular cannot afford to miss the one.