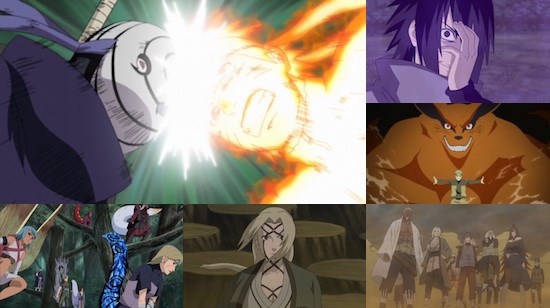 You may have noticed that we are a little late addressing this latest release of Naruto. Unfortunately the review discs didn’t arrive until after the set hit retail shelves, so without the impending threat of a release date, life, things and Christmas conspired to get in the way of my writing this review. So, we find ourselves with what should have been the last Naruto review of 2016 instead being the first of 2017.

Much like the last year, the previous box set of Naruto was mostly awful. However unlike 2016, Naruto Shippuden Box Set 25 did improve considerably at the end. Thankfully Box Set 26 continues in that vein, providing some of the best episodes the series has offered in some time.

The Forth Great War continues and the arrival of a reanimated legend in the form of Madara Uchiha on one of the battlefields means there is plenty of high level ninja action from the outset. Here the five Kage take on Madara in spectacular style, while elsewhere Naruto once again comes face to face (well forehead to forehead to be precise) with the masked man known variously as Tobi or Madara. Alongside Killer Bee, Naruto finds himself up against a veritable army of reanimated jinchuuriki and their tailed beasts. Eventually Naruto and Bee are aided by Guy and Kakashi, though Naruto also finds help from some more unconventional sources. Elsewhere Sasuke is on the hunt for reasons of his own. Eventually he tracks down Kabuto and somewhat reluctantly joins forces with his estranged brother Itachi.

You may have already realised from the above that this set is chocked full of action, and it is some of the best of the series to date. However, with all this action taking place you may find it rather surprising to discover that the set also manages to squeeze in some more contemplative moments and even fills in some long-absent back story, such as the origins of Kabuto. Thankfully the accursed filler is also kept to an minimum in this set as a result.

When all that is added together, what we have here is some of the best Naruto episodes we’ve seen recently, if not some of the best of the entire series. While the last set was something of a low point, this set represents some the best of what Naruto Shippuden has to offer.

8
Peak Naruto -this set is as good as the series has ever been.
LATEST REVIEWS