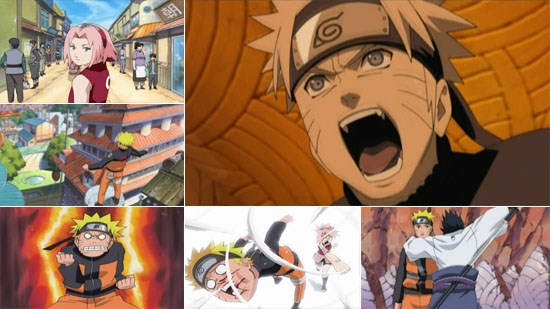 While I did enjoy Naruto during its earlier series, I would be a damned liar to say I haven’t been critical of the later episodes, especially the filler portions that took over as the manga side took hold. With Shippuden we have finally hit the post-time skip portion of the story and so we can finally get back into the swing of things. But does this new story bring Naruto back to the lofty heights it used to perch on?

It’s been two and a half years since Naruto left to train and search for Sasuke. Naruto has returned to the leaf village and it’s not only himself that has changed in the time. Not only that, but the organisation known as Akatsuki has finally made their move and their first target is Gaara of the Sand Village.

The last set of series of Naruto were on a slow decline. While the last set of episodes managed to turn things up a notch, things were not looking good for the series. Animation was clearly lacking a budget, while the storylines themselves were raiding the usual shonen and anime clichés to the extent that the series was looking very long in tooth. Nothing was happening and there was no progression in the storyline as whole, making for a frustrating experience.

Yet, four episodes into this new series and most, if not all, of those misgivings of the past have been put to rest. While we get a quick intro into the changes to characters, we then get thrown straight into the action. Naruto and Sakura team back up to take on the might of Kakashi, while the Akatsuki send two of their own to take on the power of Gaara and the Sand Village. Both become high-powered fights and really show that animation quality has gone back to the heights it enjoyed early in its series. Not only that, but the storytelling has improved ten-fold - We get an insight into the development of Gaara, a once fearsome character who has become much more three-dimensional. For all the plodding and time wasting the old series used to use to extend itself, it is such a breath of fresh air to actually have a story that moves with excitement and at an entertaining pace.

Everything else about Shippuden should be familiar to the Naruto fans. The mixture of drama and humour is as high as ever while everything, not just the character designs, has a sense of maturity about it. It does feel like the series has progressed to a degree and broken through the stagnation that the series was developing. Thankfully it also seems that newcomers to the series won’t be left out in the cold. While the Naruto fans will be able to give full back stories to everyone involved, this skip ahead doesn’t require a huge amount of background knowledge. Newbies won’t have to cover nine series just to understand what is going on, so everyone should be able to get the jist of what’s going and enjoy the show from then on.

If there is one thing that hasn’t changed it has to be the English dub. While the characters have been given a slightly more mature voice, they are still of the same standard that they have always been. Whether you choose between the dub and sub voice tracks is purely down to personally preference, but if you want the DVD to play as background noise the English dub isn’t going to make your ears rupture. At least not too much.

Overall, Shippuden is a major improvement over what we have seen before. The negatives boil down to miniature nit-picks that don’t detract from the overall entertainment of the product. Naruto is back and he is better than he ever was - We can just hope that this high level is maintained and doesn’t deteriorate over time.

Extras are somewhat light on the ground - we get the usual Japanse and English voice over tracks and some images. That's about it. Nothing to see here really.

9
The dark times are now behind us. Naruto is back to full strength!
LATEST REVIEWS