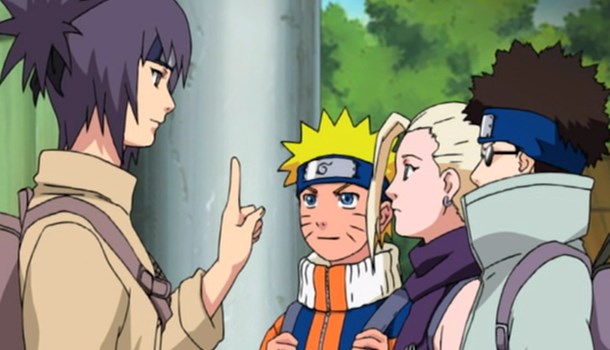 It’s been three years since Naruto started out in the UK... we’ve been there for the ups and downs that the series has thrown at us and yet we're still here. So, with the main canonical plot over and done with, does the series really have any more on offer to last us four more volumes?

Series seven finishes as Naruto, Lee and Neji fight with the lightning ninja Raiga with the help of the curry of life.  We then follow Naruto, Hinata and Kiba as they track down a thief when things become much more complicated.

What is becoming increasingly apparent is that Naruto is really just going through the motions nowadays. As with series six, the stories follow familiar plot lines with Naruto teaming up with a selection of other characters and going off onto a mission that either goes horribly wrong or has unexpected consequences, which then get resolved by the end of the story arc. Stories can last anywhere between one episode and a collection of four, but by this point there seems to be little to persuade you that what you're watching is anything beyond the usual we’ve come to expect.

That's what we get here - The usual, nothing more, nothing less. There are points where the series does pick up from its monotony, which ironically are the episodes that are Naruto-lite, but all in all there is very little here for those not swept up by the Naruto wave from earlier in the series.

Once again if you’re a fan of Naruto and are looking to own the entire series on DVD then you have more than likely decided on picking this up already. If you are really still on the fence (and after three years you should be getting sore), then there is nothing at all here that will get you into the series. As I mentioned in our previous review, you are better off waiting until the start of the Shippuden.

The usual Japanese and English audio track and trailers. Nothing to see here.

5
Slightly better than the last volume, but still way below what we’ve had before.
LATEST REVIEWS