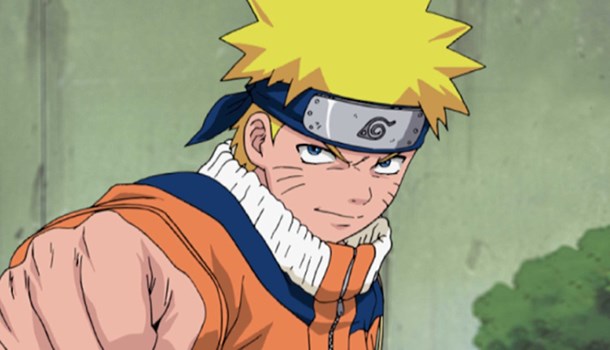 After showing on Jetix over the summer, Naruto is finally hitting DVD in the UK and the first volume is here to give you a huge dose of the orange ninja. Even better, it comes uncut – it’s what you’ve been waiting for, so here it is!

The titular Naruto (Uzmaki) is an orphan from the Hidden village of Leaf, a village of elite ninja, and a training ground for some of the best fighters in the world. The story opens with a flashback to the ferocious attack of a 9 tailed demon fox, which killed many villagers, but was eventually defeated by the highest ranked ninja of the village, the Fourth Hokage.
In an unusual move, this ninja sealed the demon away into the baby Naruto, saving the village, even though the Fourth Hokage died in the act.

Years later, a teenage Naruto is a lonely tearaway, so desperate for attention that he spends his time playing pranks and irritating the villagers who have never fully trusted this strange demon/boy hybrid. As the series begins, Naruto has reached his final exam at the Ninja Academy, but as the class clown, Naruto is going to find it hard enough to pass, let alone fulfil his dream to become the next Hokage.

Watching Naruto changing from the mischief maker to team-player is both believable and entertaining, thanks largely to the skilful writing that forces Naruto to really look at himself and weigh up his own actions. During Naruto’s first mission, he freezes and struggles to attack someone, even when his own life lies on the line. This event proves to be the catalyst that brings his character back down to Earth and forces him to focus on his life and where he’s headed.

These early episodes also introduce three other characters: Sakura, the pink haired girl that Naruto has a crush on, Sasuke, the loner that all the girls love and Naruto hates, and finally Kakashi their squad leader who enjoys romance novels. The characters spark off one another, giving a realistic tone to their relationship that helps the series along nicely. Naruto and Sasuke’s rivalry is always fun to watch as they try their best to outdo each other, but I found Sakura starting to grate after a while - always trying to woo Sasuke and not doing much herself, I began to wonder what she was there for, other than baiting Naruto and fawning after Sasuke.

Be warned, that Naruto is a seriously long haul series. At last count, the series was coming up to its 200th episode in Japan and still with no sign of stopping. While is seems daunting, it’s good to see that Manga has shovelled 13 episodes onto each release, a concept of value that far outweighs anything the competition has ever come up with.

Now for the downers. Most of these being technical; The literal language translation for the subtitles is a little off-putting, such as ninjtisu being replaced with the Art of…, which just seems strange as even in the English dub the actors say ninjtisu. Also the last chapter in an episode (being the end credits and closing song) can’t be skipped, so you have to go back into the menu to get to the next episode.

The show itself is a little slow paced, largely due to it being based on an ongoing manga, so filler is plentiful to keep it from overtaking the source material. This can get annoying at times, but mostly it stops before it becomes overpowering. It will test the patience of even the most determined Otaku though.

Naruto has all the hallmarks of a popular series, with interesting characters, expansive stories and characters that work well together, only time will tell if it can keep up the momentum and take the place of Dragonball Z in the popularity stakes.

Nothing mind-blowing, but considering the number of episodes on the discs, it’s a surprise there is anything at all. On top of the usual Textless opening and closing credits and dual language audio in stereo we also get both languages in 5.1 surround sound, a Manga Ent. standard of late.

Also included is an episode guide with the DVDs, a look at the some of the storyboards and even a little Anime to Manga transition to look at. Well worth a look.

8
A great kick off with only a few minor technical problems.
LATEST REVIEWS