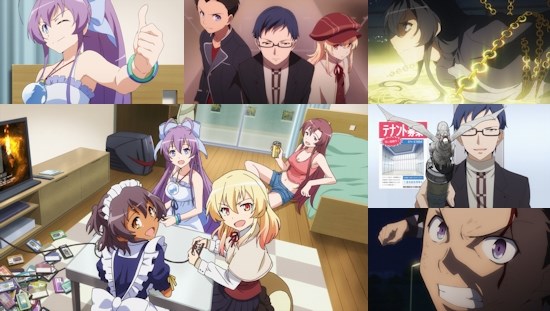 Indiana Jones; Lara Croft; Nathan Drake - hunting for unusual riches and treasures is a glamorous business that most of us like to indulge in (if only vicariously) but also a decided dangerous one. This is an issue that Nanana Ryuugajou can attest to - a successful young treasure hunter who managed to spend her youth collecting countless rare artefacts, all of which boast supernatural powers and built enough wealth to fund the creation of an artificial island. The trouble is, Nanana is dead, murdered by an unknown assailant, and the only reason that she can attest to the downside of being a well-known treasure hunter is that still exists, tethered to a single room in an apartment block on the island which bears her name as a ghost.

Walking in as the new resident of this apartment - with the room's cheap rent now explained - is the unassuming Juugo Yama, a newcomer to this island built to help people achieve their dreams. Amazingly, Juugo really doesn't seem all that fazed that he's going to be sharing his room with a ghost (and a ghost that is a pretty mean wrestler to boot), and he even takes the information of her past as her connection to the buried treasure of the show's title in his stride.

The reason for Juugo's calm demeanour in the face of this situation is a pivotal part of the show's early running, and Nanana's Buried Treasure delights in subverting the viewer's expectations during its first few episodes in particular. This proves to be a smart decision too, as it marks Juugo out as more than just your typical blank slate protagonist - he's a sly fellow whose words and actions don't always match, and it's oddly refreshing to watch a series being led by a character who you never entirely trust even when you become comfortable in his motivations and the background to his decision-making.

Alongside this, Juugo is backed up by a likeable cast as he embarks upon a number of adventures around Nanae Island to find some of the treasures which make up the so-called Nanana Collection and are hidden around the island - Nanana herself errs towards the side of viewer wish fulfilment (who wouldn't want to live with an ethereal girl who gobbles pudding and plays video games all day?) but is still a bright, breezy and fun character that still has some moments of depth, and other characters are all enjoyable to watch in their own way. This is particularly true of self-proclaimed "master detective" Tensai, who is both convenient get-out clause in ensuring that the puzzles that accompany these hidden treasures and enjoyable comic relief character on occasion; an enjoyable blend which works better on-screen that it does described in textural form.

It's difficult to talk too much about the plot of Nanana's Buried Treasure beyond these bare basics, as the machinations of collecting treasures from around the island are a hotbed of different factions, motivations and shifting allegiances which provide much of the pleasure of watching the series. Sometimes these twists and turns get a little too complex or are ill-explained, but with just eleven episodes to fill there's always plenty going on - so much so that the series finishes with a montage that might as well scream "buy the books!" (this is a light novel series adaptation, after all), which is all good and well except us western sorts can't do that at the time of writing.

What really helps to accentuate some strong - if occasionally uneven - story-telling is the show's presentation. A-1 Pictures have done a grand job here in producing a colourful world and characters that is always eye-catching and expressive, before really upping the ante with some fantastically fluid action scenes (which you might not expect from a show of this kind) and grandiose CG-crafted puzzles surrounding the treasures of the Nanana Collection which offer some great visual spectacle around these moments.

Nanana's Buried Treasure isn't going to stand the test of time as an all-time classic, but as a streaming viewing experience in particular it serves its task admirably - it's entertaining to watch, has the ability to surprise or otherwise subvert expectations on a reasonably regular basis, and it does all of this with an eye-catching panache and characters that you quickly develop a soft spot for. It meanders at times and becomes a little muddled in its story-telling at others, but as a whole it exceeded our expectations to become one of the spring's most enjoyable shows, making it well worth watching if you're on the look-out for a series with likeable characters and a keen eye for a good yarn.

You can currently watch Nanana's Buried Treasure in streaming form via Crunchyroll.

7
A good-looking series with a surprisingly strong story - this may well be a buried treasure of the spring 2014 anime season.
LATEST REVIEWS