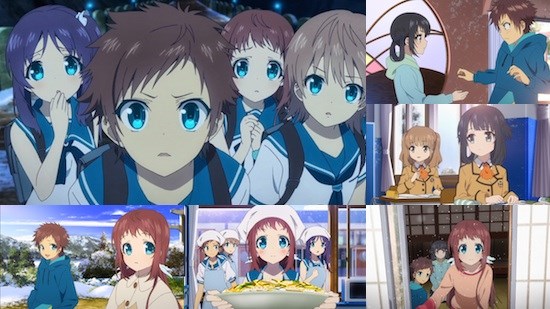 Here at UK Anime, we first looked at Nagi no Asukara back in October of last year. If you missed our review of the first three episodes then you should go and check out what we thought ....go on, it's ok, I can wait... all up to speed now? Excellent! Well, needless to say we liked what we saw and were hopeful the series would deliver on its promise. Let me say this upfront: Not only did the remaining episodes of Nagi no Asukara live up to the series' early promise, it surpassed even our highest hopes.

The premise remains as nonsensical as it ever was, perhaps even getting a little more far-fetched as the series progresses, with greater involvement of the Sea God and Ena in the later plot points. However, none of that really matters. Nagi no Asukara is first and foremost about the characters - their growth and development throughout the series is quite simply a joy to behold. As we mentioned in our previous review, the animation and character designs in Nagi no Asukara are simply gorgeous, if ever a series was crying out for a Blu-ray release it is this one. Everything from the main characters to the tiniest background detail is sumptuously animated - by way of example, the salt-flake snow looks so real you'd be forgiven for feeling that at times you could stick out your tongue and catch some on it.

PA Works' attention to detail is not just limited to the animation, as the characters and story benefit greatly from it as well, right down to any incidental background characters. One such example is the proprietor at the Triangle cafe, a little coffee shop often attended by the show's cast - he is just a bit-part background character, and yet PA Works manage to portray a level of emotion through him that some main characters in other series struggle to match. You see, as proprietor of the coffee shop, he overhears much of the main cast's comings and goings, their ups and downs. During one particularly poignant moment between Akari and her father the camera cuts to the face of ‘coffee shop guy’ and you see a single tear running down his face. It is such a simple thing, but it’s really moving and speaks volumes about the series as a whole that such a small detail can have such a big impact on the viewer.

The hinted depth we noted in our earlier review really comes to the fore as the story progresses, especially in the second half of the series. It’s difficult to go into too much detail without delving into spoiler territory, but the series serves up some really heartbreaking moments from around the midway point. To give you some idea of the strength of feeling Nagi no Asukara engendered, our Editor-in-chief (another fan of the series) suggested this review could just be a page of “onomatopoeia of a grown man crying”. Characters that started out, in the early episodes, as a little annoying or clichéd (I’m looking at you Hikari) are well fleshed-out, to the point that you really care about how the events of the series effect them.

We noted in our initial review that "The soundtrack, while not spectacular, is competent and suits the series perfectly". Through the remainder of Nagi no Asukara the soundtrack really grows on you, and matures along with the cast as the series progresses to the point where I'm really going to miss my weekly dose of the series' openings and endings.

My only (very) slight disappointment with Nagi no Asukara is the ending - Of course that disappointment is relative to expectations, which were very high indeed given the increasingly high standards in the second half of the series. Without wishing to delve into the realm of spoilers I found the ending to be a little "safe". That’s not to say the ending was a bad one - far from it - it just wasn’t the show-stopping high point of the series that it perhaps could have been. I had hoped for something a little riskier from a series which so eloquently plays with the viewers heart strings throughout it’s duration, but that said the ending is nevertheless a very satisfying one which ties things up nicely.

If our forums and social media are anything to go by, Nagi no Asukara is a series that is dearly loved by those who have seen it, but one that has passed most people by. Between the massive hype surrounding the likes of Attack on Titan and Kill la Kill, a series such as this never really stood much chance of being noticed. It’s unfortunate that Nagi no Asukara hasn’t had more attention, as to my mind it is one of the finest examples of character-driven anime in recent years. While it doesn’t quite hit the heights of something like The Garden of Words it’s not far off, and that is high praise indeed. The series remains as yet unlicensed for physical release in the UK, though it has been picked up by NIS America Stateside. It would be a great shame if this series didn't see a physical release in the UK as it is without doubt one of the best of recent years! So, anime distributors, if you are listening get this series licensed as soon as possible! Pretty please...

You can currently watch Nagi no Asukara in streaming form on Crunchyroll.