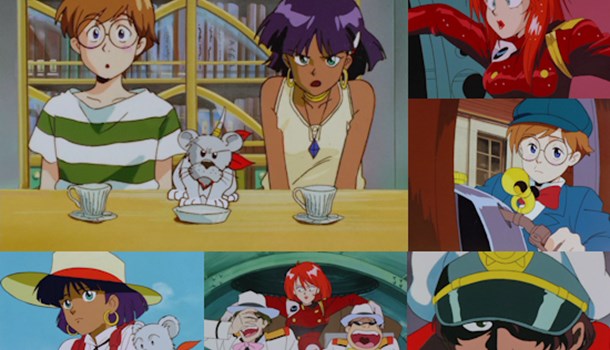 The history of GAINAX is a fascinating one, both with regards to the company itself and their often ground-breaking output. In terms of that content, it's a story that we've been able to follow in fits and starts here in the UK - the likes of Gunbuster and Diebuster have come and gone from our shelves, whilst the likes of The Wings of Honneamise and Gurren Lagann have enjoyed a number of UK releases and we're currently left pining for our own edition of the Evangelion Blu-ray box set arriving in Japan this summer.

This brings us to Nadia: The Secret of Blue Water, another jewel in the crown exhibited by GAINAX in their heyday, but one that has been left unavailable to UK audiences... until now. With Animatsu Entertainment picking up the remastered edition of this early 1990s classic for both a DVD and Blu-ray release, the time is clearly ripe for this particular secret to be discovered...

The series begins by dropping us into Paris in 1889, albeit not from quite the late nineteenth century world we may be familiar with, for this version of the Earth is filled with stories of rampaging sea monsters and the cutting-edge new weapons that have been developed to combat them. None of this is of more than passing interest to Jean however, as this diminutive young inventor and his uncle don't have time to look out to sea - no, their eyes are turned skywards, with the duo inventing an impressive flying machine that they are sure will win a contest in the French capital which has plenty of money at stake by way of a reward.

As with so many best-laid plans, the whole thing is hijacked by the appearance of a beautiful and mysterious girl - Nadia, a circus performer who is also in the city. Although Jean's attempts to flirt fall on deaf ears, his efforts serve as the precursor to the adventure of a lifetime, as he bears witness to an attempt to kidnap Nadia by a woman and her two flunkies. Of course Jean simply can't let this lie, and even with the flying contest well underway his attentions turn to Nadia, helping her escape another kidnapping attempt and kicking off a journey that will take them across land and ocean. At the centre of the constant peril and excitement surrounding Nadia is the titular Blue Water - a large, blue pendant that is clearly more than just a simple trinket, even if Nadia herself knows nothing about it... or, indeed, about her home and parents.

Watching Nadia: The Secret of Blue Water in 2015, it very quickly strikes you that they don't make series like this anymore - the sheer scope and scale of the adventure it takes the viewer upon is too hefty for the modern tendency towards thirteen episode series, and the constant changes in locale would probably give background artists and animators a heart attack at this point in time. This in itself marks the show out as something special, as it twists and turns from Paris one moment to undersea battles the next, across continents and... well, let's not spoil how things turn out in the end, shall we?

It's this sense of a meandering adventure which could literally lead anywhere that makes the series so enjoyable - there's a true feeling of unpredictability throughout, and the excitement of new discoveries and settings exhibited by the cast is largely matched by the viewer as they're taken along for the ride. Sometimes whimsical, sometimes deadly serious, it's no surprise that Nadia's premise was devised by a certain Mr. Hayao Miyazaki, and you can certainly feel his touch through the opening beats of the story in particular from its wider world right down to an obvious love of all things aviatic.

Although the series might not match Studio Ghibli in terms of its animation quality, it's no slouch in that regard either - Yoshiyuki Sadamoto's character designs are appealing across the board, and the entire production looks simply gorgeous throughout the first half of the series whether it's trying its hand at action and explosions or facial expressions and important character moments. Of course, this being a GAINAX production you probably won't be surprised to hear that this quality slides quite considerably into the second half of the series - not to the levels of Evangelion or His and Her Circumstances by the time they reached their conclusions, but it's certainly a few notches down from the quality and detail of its early episodes.

This also brings us onto by far Nadia: The Secret of Blue Water's biggest issue - the fact that almost a third of the series is, to put it bluntly, really not very good at all. After an incredibly emotional finale to a major story arc involving submarine captain Nemo, his crew, and of course Jean and Nadia, the series feels all set to move on to some kind of suitably fitting climax. Instead, what we're left with is Jean and Nadia finding themselves stranded on a desert island with nothing to do but engage in a series of increasingly daft romantic comedy shenanigans on said island until the story finally picks up again for its last few episodes. This massive tonal shift almost entirely wrecks the show's sense of gravitas and momentum and offers little to be positive about save for a few important character moments that seem to work their way into the scripts almost by accident. All of this is made all the more frustrating given that the ending to the series is, in fact, tremendous when it eventually comes, but sadly it's at a point where rather a hefty chunk of its good will has been eroded by what has come directly before it.

While we're tackling the negatives of the series, we should also reserve a few words for the English dub, which features perhaps the most atrocious cod-French accents you're ever likely to hear. Thankfully the move away from Paris reduces their occurrences significantly, but given that Jean himself is French you never get to fully escape the "horreur of American Actors talking like Officer Crabtree from ze TV programme 'Allo 'Allo". Thankfully, the Japanese voice cast are terrific and avoid trying on any accents entirely, making for a far more pleasant viewing experience.

How much enjoyment you'll get out of Nadia: The Secret of Blue Water ultimately depends on how you're willing or otherwise able to treat its long, protracted period of (to be very kind to it) mediocrity - it slams the brakes on an otherwise terrific series in a most alarming way, but if you're willing to wave its faults away or simply ignore it entirely then what you're left with is a true contender for the title of "classic". Beyond that misguided island arc, the rest of the series has plenty to say about the conflict between science and nature, and the true nature (both positive and negative) - topics which are hammered home a little too frequently within the show, admittedly, but they're delivered in some interesting ways for the most part and lend a feeling of importance to give a sheen to its grandiose sense of adventure.

Beyond its sheer entertainment factor, there's no doubting how important this series is within the history and growth of GAINAX - there are obvious precursors to Evangelion in particular scattered throughout the series in its visuals, music and story, paving the way for that seminal work's existence a few years after Nadia's conclusion. Thus, if you're interested in GAINAX as a studio, Hideaki Anno as a director, or even simply this particular era of anime production, then there are secrets to be uncovered well beyond those of the Blue Water, and this is a fascinating series to watch from that perspective alone.

Finally, we should mention that for the most part, this remastered transfer of the series looks great, even on the eight-disc DVD edition we received for review. We say "for the most part" because it isn't flawless - the first two discs in particular exhibit issues with the camera used to capture the video for this edition struggling to find its focus, leaving shots looking blurry before coming into focus after a second or so on some occasions, and a strange "twitching" as that focus adjusts during a shot in others. These issues seem to disappear as you move deeper into the series, so it's a disappointing issue (which we assume originates from the materials provided by the licensor themselves) that isn't particularly a deal-breaking one. Even with that in mind, this is the best-looking edition of Nadia you're likely to find at this time, and it's certainly more than good enough to allow you to enjoy the visual splendour of the show when it's really in its prime.

Thanks to its prolonged dip in narrative quality, Nadia: The Secret of Blue Water is a really tricky beast to sum up in a single review score - just how heavily its flaws impinge upon the undoubted quality of "the good bit" is a very personal thing that will have far more of an impact upon the show's enjoyment for some than it will for others. The long, mediocre island arc also probably feels worse from the point of view of a reviewer, working through a full series of this length in short order to hit a deadline and, perhaps, sitting in front of his TV making snarky comments as the subpar episodes build up and up. However, the number of episodes of questionable merit, coupled with the occasional HD transfer issues and awful English dub, do combine to drop what would otherwise have been a solid 8/10 release into a 7/10. When it's on form this is a terrific series and one that is absolutely worth experiencing and soaking in; just be aware of the caveats that stop it from being a truly unequivocal must-watch in the mould of other well-known shows from GAINAX's catalogue.

7
A wonderful adventure, the likes of which you don't see in modern anime - unfortunately, the show's sense of freedom means that it loses its way for a protracted period half-way through the series.
LATEST REVIEWS