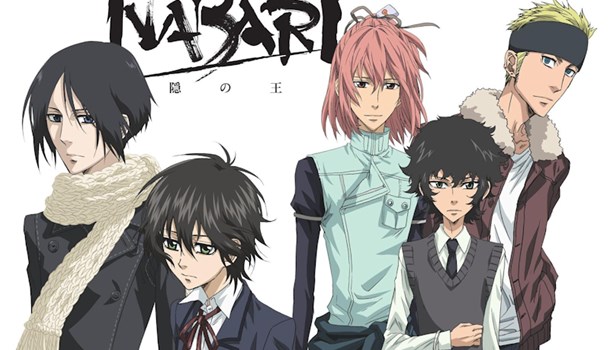 Although Naruto may have cornered the market for making animated ninja adventures a profitable business, it is of course hardly the first series to delve into the world of the ninja, and it certainly won't be the last.  One of the more recent ninja-centric anime shows to hit Japanese TV screens is Nabari no Ou, a series that has since been snapped up by North American distributor FUNimation, who have also given the show a streaming broadcast which is freely available to UK viewers.

However, unlike most series of this ilk, Nabari no Ou isn't set in some far-away or ancient land, but rather in modern-day Japan, introducing us to a world where ninjas exist and protect their villages and traditions while simultaneously going about their everyday lives and jobs without ever letting outsiders know of their true nature.

Into this shadowy but fascinating world stumbles Miharu Rokujo, a typically apathetic teenager who has little interest in anything beyond going about his own business - An attitude which doesn't change even when he's confronted by ninja intent on capturing him for a secret which he holds within him; the so-called Shinra Banshou, supposedly the most powerful secret art within the world of Nabari inhabited by them.  As the danger to Miharu's life is exposed, so various ninja also make themselves known all around him, from his teacher through to some fellow students.  Needless to say, Miharu's world is turned upside-down as the conflict between the various tribes looking to take Shinra Banshou for themselves intensifies, bringing him into contact with some extremely dangerous individuals, some of whom he develops an oddly close relationship to as his own apathy begins to dissipate in light of the circumstances surrounding him.

The first thing that tends to stand out with Nabari no Ou is just how visually arresting the series is, from its stylised flashbacks through to the excellently realised juxtaposition of the modern world with the values and traditions of the various ninja tribes, which makes for a far more wide-ranging experience in terms of both the show's aesthetic and the stories it brings to the table.

In fact, these stories often weave the "normal" and ninja worlds together quite expertly, allowing the viewer to enjoy more traditional shuriken-throwing shenanigans on the one hand against machine guns and corporate espionage on the other.  It's a heady mixture that works fantastically well on occasion, which brings us to Nabari no Ou's biggest problem - That pesky "on occasion" part.  Put simply, Nabari no Ou's twenty-six episode running time is simply too long.  The mainstay of the story could easily have been handled in thirteen episodes without losing too much of the core of the plot, but instead we're left with occasional episodes of brilliance intermingled by interminably paced offerings that feel as though they're playing for time and drawing out the series rather than trying to advance some of the nuances of the plot and characters.

Combine this with a couple of characters who could more than give Shinji Ikari a run for his money in the "Oh, woe is me, my life is so terrible" stakes for much of the series, a lead female character who is reduced from being strong and independent to a weak piece of comic relief, a number of other individuals who simply don't live up to their various billings and slap a disappointing finale onto the whole thing, and any frustrations surrounding the way Nabari no Ou handles itself soon bubble to the surface.

Come the end of it all, Nabari no Ou is a shadow of the series it might have been - Its premise is rich in potential which it only occasionally delivers on, while any wider enjoyment of the series suffers on account of its sometimes lethargic pace and less than stellar character development.  It certainly looks the part, and on an individual basis some of its episodes are nothing short of top-notch, but as an overall viewing experience Nabari no Ou simply doesn't make the grade.

Nabari no Ou can currently be viewed in streaming form in full on the FUNimation YouTube channel.

6
Despite some high quality episodes, Nabari no Ou drags out its story too long to become truly enojyable.
LATEST REVIEWS