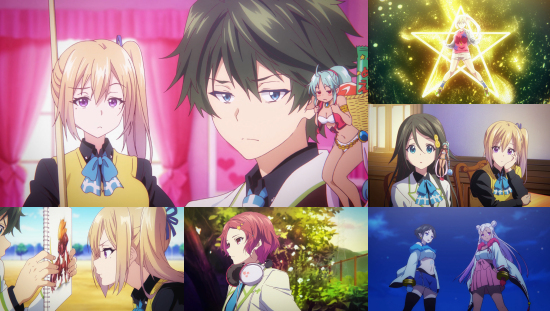 Human perception is a fascinating thing. Every day, we labour under the assumption that everything that we need to see or hear, touch or taste is delivered to our brains for us to react to accordingly, in spite of modern science allowing us to know that there are plenty of things that the human eye cannot see, or the human ear hear. What if these unseen elements in our world were only the tip of the iceberg though? What if there are even more important things hiding in plain sight that we simply can't detect?

Myriad Colors Phantom World imagines just such a world - one where an experimental virus has changed the brain chemistry of the entire human race, with it enabling us to see the unseen. Most notably, this includes "phantoms", creatures from another dimension, some of which are harmless while others are liable to cause all kinds of mischief of varying degrees. Thankfully, humanity isn't left completely unprotected against the phantoms, as a rare breed of children born after the virus outbreak can do more than just see their foes - they've also inherited powers that allow them to actively combat them.

Thus, we can effectively boil down Myriad Colors Phantom World into a single, dreaded phrase: "Magical high school series". It's a genre which seems to be easy pickings given the plethora of (mostly lazy) manga and light novels based around such a premise even if most of them have hardly been ground-breaking or impressive works, but surely Kyoto Animation have found a hidden diamond in the rough, especially given that this anime adaptation is based upon a light novel series that the studio themselves are publishing?

Well... no. Chip away the admittedly glossy coat of paint that shimmers beautifully on the surface, and what we find is another tired old magical high school series that feels like an exercise in box ticking. I'll be the first to admit that the core of its premise feels like a smart idea ripe with potential, but that sense of originality wears off within minutes to leave us with a predictable cavalcade of low-level fan service, bland characters and episodic "monster of week" fare that really couldn't be any more forgettable if it tried.

One suspects that the more generic elements of the series would have held up better had the show had some interesting characters to work with, but instead our cast is anything but - Haruhiko Ichijo is a bland protagonist, partner in phantom-fighting Mai Kawakami is at least served better with a little character development in episode three but that doesn't stop her being unremarkable, and the remainder of the cast are yet to prove themselves to be anything other than one-dimensional. Having said that, episode four of the series does at least suggest that it may have more strings to its bow, providing some character-driven drama and a change of pace without being too heavy-handed about it.

Let's hope that instalment isn't the exception that proves the rule, as for the most part even the series itself can't seem to muster up much enthusiasm for its subject matter - the existence of phantoms in the world is explained to a character in episode one via the most excruciatingly ham-fisted exposition ever, as Haruhiko effectively tells her that "everyone in the entire world knows all this stuff, but I'm going to spend several minutes spouting it at you anyway". It's the equivalent of turning to a friend in the pub whose just dropped his crisps, and telling him "I know you understand this perfectly, but let me explain to you in detail exactly how gravity works..." Thankfully, the storytelling does improve from this point forth, but little of it is remarkable enough to warrant comment - it's passable, but barely.

Oddly, it's actually around the edges of the series that we really find any truly interesting elements to comment upon; Mai's means of summoning her fighting abilities derived from Buddhist beliefs count as one of the most interesting parts of the show as a prime example of this, but the very fact we're scrabbling around in incidental materials to find subject matter for discussion speaks volumes.

It's hard to frame these opening episodes of Myriad Colors Phantom World as anything other than a disappointment. If you're on-board for the visuals then this series is a great looking one which makes full use of the myriad colours of the show's title paired with lots of great fluid animation (and no, we aren't just talking about Mai's hyperactive breasts), although even here it lacks the directorial flourishes you'll find in virtually any other Kyoto Animation title until that aforementioned fourth episode brings back a little of the studio's trademark magic. Move beyond these aesthetic qualities however, and you're left with a husk of a show - there's a hint that maybe it's finally found a good grounding from which to develop some compelling tales (and it certainly has the potential to do so from its core premise), but four episodes in we've only seen the briefest of sparks that threaten to ignite it.

Given such broad disappointment, here's a thought - why not spend the time you could spend watching this series to go and watch (or rewatch) Sound! Euphonium instead?

You can currently watch Myriad Colors Phantom World in streaming form on Crunchyroll.

6
It delivers some top-notch animation, but its phantom world threatens to be too bland beneath those myriad colours.
COMMENT AND DISCUSS
blog comments powered by Disqus