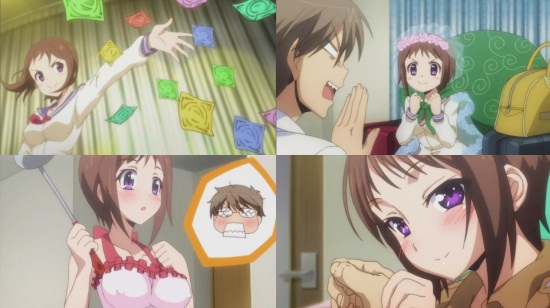 My Wife is the Student Council President - Eps. 1-3

Anime series with shorter than standard episode length (running anywhere from three to 15 minutes) have always proved really divisive amongst fans, probably due to the fact that you need to have a more-or-less instantaneous buy-in to the series and it’s premise, and the fact that they have a tendency to consist of a single joke done over and over with minor differences. Given that, your willingness to sit through a dozen or so (or a hundred or so if you’re a Teekyu-addict like our editor) episodes is going to come down to how interesting you thought that gag was.  Amongst this season's crop of short series though we have My Wife is the Student Council President, and it could well prove to be a bit special.

Our leading man Hayato is running for student council president, but unfortunately his campaign is due to fail pretty spectacularly when it runs up against Ui Wakana, who declares that she will campaign for free love amongst the student body before showering her would-be constituents with condoms. It doesn’t take a genius to figure out who a bunch of hormone-crazed teenagers are going to vote for whatever country you’re in, so Hayato is relegated to the vice presidency and heads home only to be greeted by Ui on his doorstep. As it turns out their parents have not only arranged a marriage between the two but packed Ui off to live with Hayato to start their new lives together!

So far, so standard right? Well, it is. Despite some bits and pieces here and there this is as formulaic as it gets – our lucky couple encounter an issue (Ui can’t cook, Ui gets jealous when Hayato holds someone’s hand etc), they work together to resolve it and then they somehow find a way to make Ui loose her top. Rinse and repeat. It has to be said though that the show manages to keep a decent balance between its comedy and fan-service and never becomes solely focused on one or the other.  It also does a decent job of keeping the characters in line - whilst Ui bounces happily from her confident student council persona to being a happy but inexperienced housewife, Hayato manages to pull himself out of a nose-dive that almost sees him being a much more unlikeable character, ensuring the way the two bounce off each other is great fun.

How far the series is going to take matters remains to be seen of course, though it would certainly be a pleasant surprise if they decided to go off-formula and keep the relationship progressing given that neither Hayato or Ui seem to be all that upset about the situation that’s been thrust upon them. It would certainly be interesting to have the series become something more akin to Futari H than your standard fan service fare.

It does have to be said that the animation quality is pretty variable and the show has clearly been made on a shoe-string budget despite its shorter running time, but the characters are cute and no-one has any crazy proportions or silly hats (I’m looking at you Chaos Dragon....) so the aesthetic is fairly pleasing.

"But wait" I hear you say, "You said this could be something special, but this sounds like a fairly standard show just with a shorter running time!" Well that’s because what could make this show stand out isn’t the show itself, but the way it’s being streamed to us. For the first time (that I’m aware of at any rate) Crunchyroll has picked up both versions of the show – the standard censored version and the uncensored version that runs on subscription channels like AT-X in Japan (although they did pick up Terraformars uncensored but that was never simulcast and they couldn’t quite seem to figure out what they were going to do with it). Whilst the nature of the series probably made this a cheaper proposition, the fact that they’ve done this clearly means that they’re experimenting with just how well an uncensored show will do streaming outside of Japan compared to the cost of picking it up. I’m absolutely behind this 100% as there have been many cases of streaming shows where people will watch the first episode streaming then start "flying to Japan" once they work out there’s an uncensored version available; simulcasting that version as well means you recapture that audience. Additionally, the fact that Crunchyroll have both versions of the series mean that they can still have the censored version around for accounts held by younger or more prudish viewers (although having said that the censorship for this show can be quite fun as it often replaces scenes outright with new scenes where the characters just make gags until they can cut back to the show). If this method of streaming the show works then this series could be the first of many which will give it a little niche in the history of streaming anime.

Personally, I really like this show. I like the characters, the gags and I like what the series hopefully represents but as stated above, a short series like this is always going to be a divisive one. The great news is that with each episode only lasting eight minutes it's not going to take much for you to be able to dive in and see if this one for you!

You can currently watch My Wife is the Student Council President in streaming form on Crunchyroll.

6
Choose your own adventure - boobs or no boobs?
COMMENT AND DISCUSS
blog comments powered by Disqus