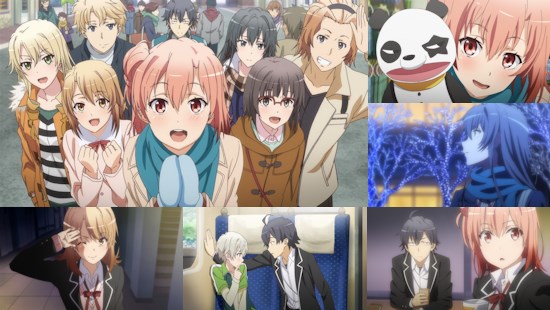 After all of the plaudits I'd seen thrown in its direction since it first aired and streamed, I was somewhat surprised by just how disappointed I was in My Teen Romantic Comedy SNAFU's first season - where it had been sold to me on its strong characterisation and handling of various issues, I found nothing but contrived writing and character building which left me cold at best, and actually intensely irritated at worst thanks to the show's ill-advised solutions to problems which it then sold as the product of some kind of genius. Nonetheless, the second season of the series - My Teen Romantic Comedy SNAFU Too as its English title would have it - was positioned by many as the peak of the show's craft, and thus I saw fit to delve back into the world of Hachiman Hikigaya and his Service Club cohorts. What is it then say? Fool me once, shame on you, fool me twice...

Returning shortly after the end of the first season and the school festivals which brought it to a close, we return to find Hachiman's worldview to be as cynical as ever, and even the promise of a school trip to Kyoto does nothing to assuage his ennui. What's more, the advent of this high point of high school life only brings with it more work for the Service Club, as Kakeru Tobe has pin-pointed this trip as the perfect place to confess his feelings to Ebina - another member of his circle of friends - in spite of the perils of potentially tearing that group apart.

In typical style, after a lot of pondering and soul-searching Hachiman comes to a conclusion as to how to resolve n increasingly fractious issue for this group of friends, and he chooses to do so in the most self-destructive and wrong-headed way possible. "Here we go again", I thought to myself "more terrible solutions that are lauded as genius". Yet not this time - aside from hurting himself with his actions, Hachiman finds himself turned on by both Yui and Yukino for taking such a selfish route to resolving the issue (ironically born from their own selfishness, such is the unlikeable nature of the show's cast), and the aftermath of this decision threatens to tear the Service Club apart.

Although Hachiman continues to pile other's problems onto himself from this point forth, taking a role in manipulating the school's student council president election and then helping the new president with a difficult issue in her new role, it slowly begins to dawn on our protagonist that in reality he isn't fixing much of anything at all. This is particularly brought to the fore with the brief return of a character Hachiman "saved" in the first season - having left those events with the warm glow of success, he's now faced with the knowledge that any change he did effect was minimal and decidedly short-term before normal service was resumed. Ultimately Hachiman is forced to admit that his habit of taking burdens upon himself alone doesn't work, giving him the impetus needed to start mending the bridges he burned, and perhaps even saving his own high school life from the damage his cynical outlook has wrought upon it.

If all of this sounds like an improvement over the first season, you'd be absolutely right - I found myself quite excited about seeing where the series headed once it turned some of its elements on their head and effectively rewrote the rulebook around the relationships between its core characters. Yet, this was also the point where the series somehow inexplicably fizzled out, taking all of these revelations laden with potential and wasting them all utterly before juddering through to a frustrating non-ending which again offers up interesting possibilities before cutting to credits and leaving them unresolved. This is almost certainly a symptom of the show's light novel origins as it seeks to leave things open for a third season without shoe-horning in anime original content, but it leaves My Teen Romantic Comedy SNAFU Too feeling poorly paced and unable to execute on its most interesting ideas.

Still, there are at least some other highlights beyond those spurned possibilities - although often tiring, the show's cynical worldview does occasionally hit the bullseye, as is the case with its introduction of the student council from another school who have clearly been watching too many episode of The Apprentice. It's something I wish the show did more of - when it looks to find comedy from its situation it seems far more comfortable than when it focuses on the drama inherent to a situation, and the same creator has proved himself far more adept at using that cynicism with a comedic benefit with the immeasurably better Girlish Number which is airing at the time of writing this.

Away from its story, this second season is on a par with the first. Visually, the show sports nice character designs and competent animation that puts some real work into conveying character's emotions via expressions and body language when it matters - a smart move, even if that means animation quality suffers elsewhere. The Japanese voice cast also do a really good job in conveying those emotions themselves, while the show's English subtitle track can't be faulted and does the job as expected.

Much like its first season, My Teen Romantic Comedy SNAFU Too is a frustrating experience - I actually admire its intent and what it seeks to portray, but the way it does so is frequently too ham-fisted or half-baked to have the desired impact, and instead leaves me disappointed or downright irritated. In a sense, that frustration is even more palpable this time around - the show threatens to fulfil all of its potential then somehow still manages not to as it runs first out of steam, then out of time. If you enjoyed that first series of My Teen Romantic Comedy SNAFU then you'll doubtless welcome this extension to that and the ways it seeks to explore and expand upon its premise and characters, but personally the improvements this second season does make aren't enough to make up for its multitude of shortcomings.

6
This second season boasts some far stronger moments and an interesting shifts in the relationships amongst its main cast, before ultimately grinding to a halt and delivering a frustrating ending to compound its other shortcomings.
LATEST REVIEWS