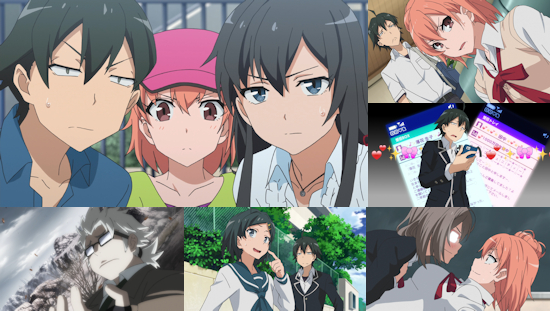 Making friends is hard, and it's a recurring theme within anime - indeed, it often depicts the struggle to socialise and get to know people as almost an honourable rite of passage rather than the anxiety-inducing nightmare that it really is.

Frequently, the friendless nature of an anime protagonist is very much a self-inflicted affair on account of their shy nature or something along those lines, but that isn't the case with My Teen Romantic Comedy SNAFU's Hachiman Hikigaya - he's actually a reasonably confident and personable lad, and he's even had his share of attempts to confess to girls rather than running a mile at their sheer presence. However, in spite of all of this things have gone awry for Hachiman - a traffic accident on what would have been his first day at high school led to him missing a key opportunity to make friends of his classmates, and his ensuing loneliness coupled with those failed romantic advances has left him cynical to the core.

Such is the extent of his loathing of youth and everything that it stands for at this point that it's even seeped into his schoolwork, and it's this that sees him forced into joining the after school Service Club, founded to help students in need whether their problems are academic, club-related or something more personal. The head and sole member of the club isn't exactly what you'd expect either - Yukino Yukinoshita (you'll notice this series has a penchant for uninspired names) is academically gifted, but she's also blunt to a point and as a result not the most accommodating of people. Nonetheless, Hachiman has no choice but to join her in her club activities - not that there seems to be much to do, at least until a girl named Yui Yuigahama (see what I mean?) comes along...

Having initially visited the club as a punter, the effusive and outgoing Yui finds herself suitably smitten with its two members to choose to join their not-particularly merry band, which in turn spurs them on to be a little more active in their service role, whether it's helping out within their school or finding themselves further afield assisting at a summer camp.

This basic setup is what effectively leads us into My Teen Romantic Comedy SNAFU's formula - the Service Club are presented with a problem that needs solving no matter how small, and Hachiman's detached and cynical view of the situation ultimately leads to a resolution of the issue at hand. Of course, there's more going on beyond that - our protagonist's relationships with both Yukino and Yui shift and change over the course of the series, and Hachiman and Yukino in particular are subject to a fair amount of character development as events pertain to their respective pasts and events that have shaped their current personalities.

While the structure of the series itself is sound, it's how the narratives within that structure are built that become troublesome. Throughout this first season, you can't escape the fact that a lot of the writing and characterisation feels contrived - there's always a sense that the show is going with whatever's convenient rather than building up and resolving issues in a way which feels organic. Similarly, there rarely seems to be any nuance or shades of grey to the situations at hand - most issues are resolved with all the refinement of someone choosing to open their bedroom window with a sledgehammer to a pane of glass, yet everyone around the main cast simply sits back and accepts this as the best solution with little to no argument.

In a couple of cases this causes the solution to the over-arching issue within a story arc to be borderline abusive - in one case a bully of sorts becomes the bullied via Hachiman's actions, and in another the relationships between an entire group of friends are shattered in the name of "justice". The fact that these actions are then shown as the best answer to the scenario with no negative consequences suggests a real sense of tone-deaf writing - one begins to suspect that Hachiman's cynical distrust of the world is also very much the original author's, and thus everything that the protagonist does is crafted to be a validation of said author's opinions.

The real shame about all of this is that there's clearly the core of a very good series here - Hachiman himself is far more interesting and well-rounded than most light novel protagonists of his ilk, and the supporting cast are all likeable and feel like individuals carefully picking their way through teenage life in ways that are easy to relate to. The scenarios they find themselves in are similarly smart in their setup - the drama on show here isn't overblown, its comedy is normally well-placed and delivered, and the concerns of those who seek out the Service Club's help all seems very believable, which makes the way they're often ultimately dealt with that bit more frustrating.

In terms of presentation, the series does its job nicely - character designs are all appealing and fit the personalities of those individuals to a tee, and the overall animation style and quality does enough to convey everything that it needs to simply but effectively. As a subtitle-only release, those English subtitles are excellent and comprehensive, and the Japanese voice cast match their characters in terms of bringing personality and strong delivery to the table. In short then, we have nothing to fault with the show's UK Blu-ray release.

Having bounced unsuccessfully off of My Teen Romantic Comedy SNAFU at the first time of asking when it originally aired, I was hoping to find a better experience this time around having heard a lot of positive discussion around the show in the interim. In a sense, I *did* find that better experience - I made it through the entire series for starters - and I can see the appeal of the show readily enough, but I simply can't get beyond the way it inadequately resolves the issues it brings to the table and then champions those poor resolutions as some kind of work of minor genius. Of course my feelings in that regard are entirely personal, so others may find the show's narrative far more satisfying, but I'd still contend that My Teen Romantic Comedy SNAFU is an example of a strong premise undermined by contrived writing.

5
It breaks the mould compared to similar series, but also breaks many of its good ideas with some less than satisfactory writing.
COMMENT AND DISCUSS
blog comments powered by Disqus