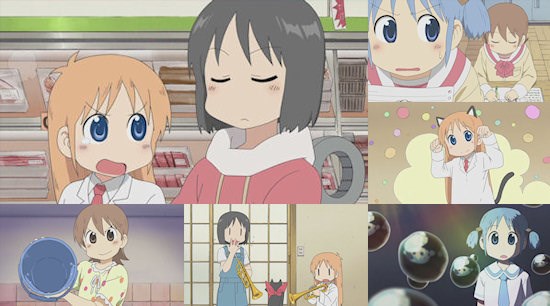 "Not bad but not great either" pretty much summed up my colleague Elliot's reaction to Nichijou's early episodes, and for what it's worth it was a summary that I agreed with entirely - as you'd expect of Kyoto Animation it's a visually beautiful and polished effort from beginning to end every week, but in terms of actual content it feels largely vacuous even in comparison to other anime comedy series that have taken on a similarly madcap outlook.

Perhaps even more telling than Elliot's early review comments is the fact that he isn't even watching the series any more, kindly allowing me to step into the breach to discuss the remainder of the show's first half.  Well, I say kindly, I'm actually a little envious that he was prescient enough to jettison watching the series while I've remained resolute in my determination to see it through to the end.

Determination really is the name of the game when it comes to watching Nichijou - much like panning for gold or drilling for oil, you'll need to steel yourself for long periods of fruitless searching before you hit comedy gold.  It isn't so much that the series is badly-paced as it is almost painfully unfunny at times, a problem made worse by its frequent insistence upon covering up that lack of comedy with massive over-reactions from its characters.  While these reaction shots can occasionally garner a smile, so over-used are they that such moments become downright irritating, particularly when it comes to the show's over-reaction queen Yuuko who gasps, groans and pants her way through most scenes like the animated equivalent of fingernails on a chalkboard.

Putting the negatives to one side for a moment, it isn't all bad news for Nichijou.  As per those early episodes, the instalments under consideration here continue to be a showcase for TV animation at its best - occasionally explorative and experimental, but always detailed and full of character to the point where the series is sometimes almost worth watching for the show's animation alone.  We also can't ignore that at times the series is funny, very funny indeed in fact - for evidence of that, I would point you towards episode six as an example of Nichijou delivering wall-to-wall laughs throughout to the point where it even makes good use of those aforementioned over-reactions from Yuuko as well as some great moments of surreal and downright bizarre humour.

Away from this shining example of what the series can be capable of, Nichijou's humour is well and truly scattershot - some episodes offer nary a laugh while others cause enough bouts of giggling to be worth their entrance fee.  This sometimes gives the impression that here is a comedy series that isn't yet comfortable in its own skin, and it's only as we reach this half-way stage in the series that its characters feel as if they've "grown in" to the show, with the exception perhaps of the Nano, Professor and Sakamoto triumvirate which has felt like the natural centrepiece of the show from the outset.  This leads to the ultimate question posed by anyone thinking about watching this show: how funny is "funny enough"?  Comedy being what it is your mileage will most definitely vary, but if you're the impatient sort you might be better off seeking your laughs elsewhere.

At the end of the day, you could probably call me out as being a little "tsundere" for Nichijou - "i-it's not like I want to get up early every Sunday morning to watch you!"  For all of its failings as a comedy anime series, and for all of the complaints I have about aspects of its delivery, there's a certain something that keeps me watching every week, a well-rendered blend of good animation and solid characters that does just enough to ease the pain of another over-used Yuuko reaction shot or another wasted skit with no pay-off.  Those feelings on my part probably shouldn't obfuscate the fact that Nichijou is, when push comes to shove, a decidedly average series, but you can't deny that it's a wonderfully well-presented slice of mediocrity.

You can currently watch My Ordinary Life (aka Nichijou) in streaming form right here at UK Anime Network - the series is also now available via Anime on Demand.

6
Moments of rare genius stand out to show what the series is capable of - sadly, such glimpses are few and far between in a sea of slickly produced yet ultimately mediocre comedy.
LATEST REVIEWS