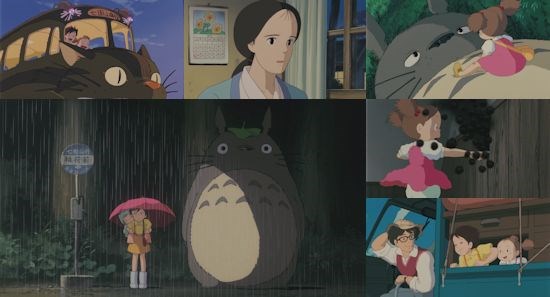 While Spirited Away remains the most likely answer to the question "name one Studio Ghibli movie off the top of your head", it would almost certainly be followed closely after by My Neighbour Totoro in the minds of many - so iconic has its titular character become that he can turn up in everything from Toy Story to South Park without anybody batting an eyelid.  Thankfully, now this much-loved Hayao Miyazaki offering from 1988 is reaching the UK again as the latest in the studio's series of gorgeous Blu-Ray remasters.

Although it feels like the majority of you will already be familiar with the story of this film, indulge us for a moment as we outline it for newcomers anyway.  The films begins with the Kusakabe family moving home into a big, ramshackle house in the country - a move which proves to be an exhilirating journey of fun and discovery for the two sisters within that family, Mei and her elder sibling Satsuki.  With their mother absent and ill in hospital while their father commutes to a university in Tokyo for work life is pretty tough, but you'd be hard-pressed to believe it given the positive attitude exhibited by the sisters as they continue to make the most of their new surroundings.

Eventually, Mei's exploration particular brings her to discover some decidedly unusual creatures, ultimately leading to a meeting with the massive yet placid Totoro himself - at least, that's what Mei decides that she's called.  Although their first meeting is fleeting, a subsequent encounter (at a bus stop of all places) grants another glimpse of this fantastic world normally hidden from view and, thanks to Satsuki's kindness, when Mei goes missing in the wake of news about their mother's condition in hospital it's Totoro who has the resources available to help find her.

Perhaps one of the most fascinating things about watching My Neighbour Totoro again is realising just how difficult it is to pin down the reason for the film's success - appearances of its titular character are brief for most of the film, yet there's sufficient energy and emotional investment in the Kusakabe family and their circumstances to make watching their family life play out through the eyes of its youngest members a fun and enjoyable experience even when relatively little else seems to be happening.

It is, of course, Totoro himself who steals the show - a stroke of creative genius thanks to a character that walks the line between imposing and cuddly perfectly, and a creature brought to life thanks to Studio Ghibli's iconic attention to detail which makes his every movement and reaction a joy to watch.  That Totoro is used sparingly is perhaps another reason for the film's success in what it does - his appearances are by definition supposed to be unusual, so those moments where he does show up leave you savouring every last second.

Away from its adorable titular character and the comedy inherent in watching a couple of kids crash around the film's country landscape, there is a deeper thread which runs through the film; namely the fear of death and the loss of a family member seen through the eyes of a child.  To slip this into a film aimed a younger audience is arguably brave in itself, but to pull it off in such a subtle yet frank way is well worthy of recognition, and it certainly adds an extra dimension to the movie's narrative where it might otherwise have sagged.

Moving on to talk specifically about this remastered Blu-Ray release, anyone who has sampled any of the previous Studio Ghibli remasters won't be surprised to hear that this one is equally sumptuous - it's crisp, clean and colourful and really allows you to enjoy every iota of the film's gorgeous art and backdrops while becoming aware of details which may have evaded you previously if you've only seen the movie on DVD.  From a subjective perspective this feels like the best-looking Ghibli remaster yet, but perhaps that's simply a symptom of the quality and aesthetic of the film as a whole.  The film's audio is also top-notch right the way through to Joe Hisashi's soundtrack, and although it might not feature the best English dub ever to grace one of Miayazaki's films it's still more than passable (even if the knowledge that Totoro and Transformers' Megatron share the same voice actor might bake your brain slightly).

It seems almost passe to close out this review by pointing out that My Neighbour Totoro remains one of Studio Ghibli's best, but it's also a necessary point to make because it's absolutely true - the film is regarded as a timeless classic for a reason.  As a result, this Blu-Ray release of the film is an absolute must-buy for any anime fan without a doubt, offering up the definitive way to enjoy a film which has charmed and enchanted so many, and most likely will continue to do so for generations to come.

9
One of Studio Ghibli's best works, given a new lease of life via this gorgeous remaster. What's not to like?
LATEST REVIEWS