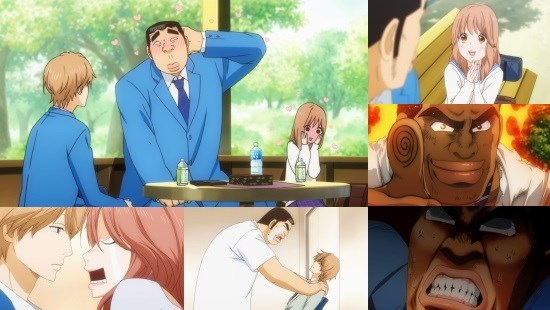 For Takeo Goda, love doesn't come easily. Every girl he's ever liked has always confessed their love to his best friend Makoto 'Suna' Sunakawa instead. While his large physique, athletic ability and honest nature make him popular with his friends, most girls find this intimidating, preferring Suna's more conventional handsome looks instead, in turn causing Takeo to have self esteem issues about himself and whether girls would find him attractive. This changes when he comes to the defence of a girl named Rinko Yamato on a train. After saving her from a molester, Rinko gets in contact with Takeo to thank him. From their interactions Takeo begins to believe Rinko has feelings for Suna instead of him. Whilst being charmed by Rinko and developing feelings for her himself, he decides to put these aside in order to help his friend. However, Takeo may not realise that his inexperience in love and relationships is leading him to make some wrong assumptions.

My Love Story is a romantic comedy that is rather light-hearted and sweet. For the most part the series itself doesn't rely on the angst and drama that most romance anime tend to go for. Instead My Love Story tends to take an introspective look at each of the characters, mostly discussing their thoughts and feelings about relationships and how they see themselves. The best example of this is Takeo. Having been used to rejection all his life in regards to relationships, he starts to question himself and whether anyone can like him romantically. Even when he does find love he starts to wonder how to be a good boyfriend and how best to approach romantic situations. The series handles this in very light-hearted moments within episodes, mainly revolving around Takeo asking Suna for advice that would seem obvious to anyone but, given Takeo's naivety and innocence, the joke is that he needs to have things explained to him at length. This leads to very some rather humorous exchanges between the characters and some decidedly heart-felt moments on display. This is really helped by the fact that Takeo is a really relatable character that you want to see succeed at everything he does. The further into the series we get the more we see people show a genuine admiration of Takeo for being honest, selfless and dependable. He's a character that is a nice guy at heart, albeit one that unfortunately not many people look past his appearance to find. This does lead the way into a few situations where characters slowly realise how nice Takeo is and how good a couple he and his girlfriend make.

While most romantic comedy anime take their biggest points of comedy and drama from misunderstandings, My Love Story cleverly subverts this by having the biggest and most important misunderstanding of the series cleared up within the first three episodes. Many other anime would take this plot point and stretch to near enough the entire series length in order to build towards a grand climax to the whole “will they-won't they?” trope. My Love Story instead answers this question rather early, leaving the rest of the series to show the nicer aspects or finding love and being in a relationship. This in turn gives My Love Story ample opportunity to focus on the characters and their relationships with each other. For the most part the series focuses on three main characters; Takeo, Suna and Rinko. From time to time the show will introduce some sub-plots focusing on Takeo and Suna's group of friends, Rinko's group of friends and Suna's older sister. All of these blend well into the dynamic and tone the show has set for itself, that being an idealised relationship where the main couple are happy together and spend most of their time showing people just that, whilst also developing and strengthening their relationship. Although this may not sound like the most dramatic or exciting prospect in terms of romance anime, it really doesn't need to be; My Love Story from it's outset establishes exactly what kind of show it wants to be and handles this extremely well, thus providing a very sweet and rather comical romance anime.

One of the ways in which My Love Story best portrays its comedy is in its visuals. There are quite a few physical comedy gags, most of which revolve around Takeo's appearance and his superhuman displays of strength, combined with the reactions of onlookers. Also the characters make a lot of rather animated faces which is done on purpose to add to the comedy. At times Takeo also wears shirts that have a slogan on them change between scenes to depict his mood - a subtle joke for those paying attention. In terms of visuals My Love Story has a really gentle colour palette which makes things look rather bright. With regards to the sound the music is gentle and really upbeat most of the time, and the voice acting in both the Japanese audio and English dub work really well. Special mention needs to be given to the English dub in particular, which really gets all the character voices nailed perfectly and gives a script that sounds natural and is very comedic. The series can be enjoyed in either language without compromise.

Overall, My Love Story is a rather sweet and gentle take on romantic comedy. Whilst the drama is lacking it really doesn't feel like it's missing anything. A nice mellow love story for those wanting a change of pace.