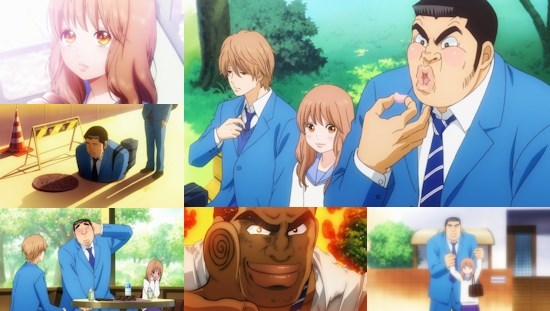 The tired old cliché that "nice guys always come last" is one that is rolled out all too frequently, but in the case of Takeo Gouda you could certainly argue that it's true - you'd be hard-pressed to find a more caring, compassionate and good-natured person, yet his life thus far has been punctuated by girls shunning him for his attractive friend Makoto Sunakawa in spite of his charms.

Then again, Takeo's problem isn't so much his personality as the fact that he's a behemoth of a young man - a giant in stature and build who one would understandably think twice about approaching were you unaware of the gentle giant beneath that mammoth exterior.

To use another old axiom however, everyone has their soulmate, and a moment of compassion from Takeo as he helps a girl escape the unwanted attentions of a molester on a train might just have helped him to find his. Outwardly, Rinko Yamato couldn't be any more different than Takeo - a slight, quiet and unassuming girl, it seems obvious to Takeo that the only likely outcome here is that she'll fall head over heels for the ever-present Sunakawa.

The reality, however, is rather different - Yamato hunts down Takeo to thank him for his help, then leaves her phone behind in his room which affords another meeting. This all leads our protagonist to be even more convinced that she must have eyes for Sunakawa, completely oblivious to the fact that all of these ever-more regular meetings between himself and Yamato are, in fact, due to her interest in him.

This is usually where a romance-led anime series would lead into countless episodes of misunderstandings and the main pair of characters dancing around one another and their feelings without ever actually getting anywhere, but thankfully My Love Story is keen to dispense with that convention and come the end of the third episode we have ourselves a decidedly unusual but undoubtedly adorable couple. Of course, this leads to the question of what direction the series heads in in lieu of that more typical fare (especially given that it'll also be airing through the summer), but fear not, because subsequent episodes still manage to find some relatively familiar ideas to mine as this new couple - and Takeo in particular - still have plenty to get to grips off regarding both one another and others around them.

The resulting story is very much a simple but effective one - its major plot points are all telegraphed a mile off, which may frustrate some as the viewer is left shouting at their TV or monitor as Takeo singularly fails to grasp what is required of him, but provided you're along for the ride and are willing to accept a well-meaning but dense protagonist (dense being Takeo's own description of himself, not mine) then the narrative does its job admirably. It never breaks new ground in spite of its early love confession, admittedly, but then would you really expect otherwise from a romantic comedy-drama?

What My Love Story does provide, however, is lots of great comedic moments. In particular, the series is masterful in its use of physical comedy, with Takeo, Yamato and the interactions between the two filled with plenty of opportunities to garner laughs due to their statures and behaviour. These frequently slapstick moments are made hilarious largely on account of their presentation, smartly animated to accentuate their comedy value with the kind of care in their presentation that reverberates through the entire series. Indeed, the series as a whole is largely gorgeous - its quality slips here and there, but its overall aesthetic and colour palette do the show a lot of favours, and its animation provides some impressive turns when it comes to Takeo springing into action to leap from buildings or run down the street, to give a couple of examples.

The other major job of the show's art style is to ensure that the series remains as adorable and saccharine as possible - it's really impossible to understate just how sweet watching Takeo and Yamato and their blossoming love as they interact with one another. Aside from the comedy of seeing the hulking Takeo blushing in a shower of your typical shoujo sparkles, the series makes use of typical shoujo trappings such as written text for character's inner thoughts to keep things moving along at a decent clip while still allowing you to quickly get to grips with its cast of lovable characters.

Much as Takeo's behaviour will frustrate some, so this sweeter than sweet love story will be off-putting to others, and there's certainly not been a romance-led series that has been quite so sickly sweet almost from the outset. From a personal perspective, this bright and bubbly outlook even when there are bumps upon the road of its main relationship, is part of its draw - it's soothing, enjoyable escapism to watch two characters getting along, and the entire cast having broadly a good time as they do so. In a sense, it's the romantic equivalent of watching cat videos on the Internet - you aren't learning anything new or having the deepest recesses of your brain stimulated, but awwww, loooook, aren't they soooooo cuuuuuute?!?!

Assuming you're okay with watching an idiot fall in love in the cutest way possible, then there's really no denying My Love Story's entertainment value - it's a great looking series that plays impeccably to its strengths week after week to date. Whether its story and characters will continue to impress over twenty-four episodes is a question for another day, and I do worry that it'll run out of steam before that point, but quarter of the way into the series this show is a heart-warming thing of beauty that is a perfect escape to the harsh realities of everyday life.

You can currently watch My Love Story!! in streaming form on Crunchyroll.

8
An adorable story filled with laughs and afforded a suitably beautiful visual treatment - it's incredibly saccharine, but perfect to satisfy your sweet tooth.
LATEST REVIEWS