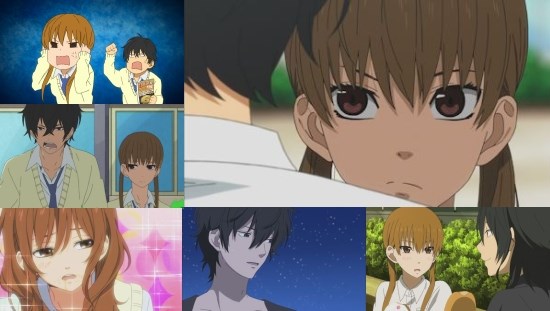 Anyone who has watched any quantity of shoujo anime will probably know how it tends to work - girl falls for boy; boy falls for girl; couple spends an inordinate amount of time dancing around one another without progressing their relationship in any meaningful fashion; viewer throws remote control through television.  Against this backdrop, My Little Monster (aka Tonari no Kaibutsu-kun in Japan) is a breath of fresh air, to the point that within its first episode we see both a confession and a kiss - that's how quickly things move with this series.

However, before we get ahead of ourselves let's introduce the premise of the show - for starters we have Shizuku Mizutani, a serious and studious girl whose only interest in life is her education and with a personality that led to her receiving the nickname of "dry ice".  Then we have Haru Yoshida, a boy with the social mores of a runaway boar and a temper with a decidedly short fuse.  In other words, you couldn't find a more chalk and cheese pairing if you tried.

When Shizuku is press-ganged into taking school work to Haru's home thanks to his absence after a fight at school (Haru is a serial truant, incidentally) she finds herself rather disturbingly dragged into his graceless world - something which Shizuku is none too happy about, whereas Haru is thrilled to have found someone who he sees a friend.  As time goes on, Shizuku finds herself engaging with others thanks to Haru's presence, while Haru himself learns some manners and how to deal with everyday life courtesy of Shizuku's calming influence, in turn bringing them both closer together as a result.

What really lifts My Little Monster above a lot of other shoujo anime (aside from its relatively rapid twists and turns, even if some of its early work is quickly quelled to push its main relationship back into a state of impasse) is its female protagonist - in short, Shizuku is pretty much a shoe-in for the autumn season's best character.  While so many romance-focused works leave us with either a two-dimensional or simpering, needy lead female, Shizuku is a strong and determined girl with a mind of her own, and what's more she has no issues with speaking her mind.  This makes her interactions with others a joy to watch, as she refuses to be pushed around or "owned" by Haru, and although she's blunt she rarely fails to get her point across.  Yet in spite of this, we still get plenty of opportunities to peer under that cold exterior and find a girl with occasionally confused emotions thanks to the new experiences presented to her, and watching her reconcile and learn from these experiences adds another dimension to proceedings.

Although none of the other major characters match this level of fascination for the viewer (but she is the protagonist after all), they all have a part to play and broadly do so well - it's admittedly still a little difficult to believe in Haru as Shizuku's love interest (and one element of the first episode is enough to give him an unlikeable air that's tough to shift) but even his character is developing enough to at least make this side of the series more plausible.  As you'd expect there's melodrama, developing love triangles and family issues ramping up as the show progresses, and although none of these elements are exactly original they've all been well-written and depicted thus far.

This well-versed storytelling is backed up by equally proficient artwork - indeed the art style of the series is deceptively simple and colourful, but with a sharp attention to detail once you look a little closer to make this a show that's just as easy on the eye to watch as it is on the brain.  The show's soundtrack is also enjoyable, and its voice acting cast pretty much nail all of the characters involved well enough.

Despite my prodding fun at the typical shoujo mind-set at the start of this review, I'm actually rather a big fan of a good shoujo romance story, but regardless it still feels refreshing to see My Little Monster trying to do things a little differently at least in part, bringing us a series where there's a very real feeling that its main relationship can progress substantially throughout the series.  By no means is this show perfect (it also displays some of the more troubling elements of the genre, particularly in aspects of Haru's behaviour which are somehow passed off as acceptable), but it's an enjoyable watch with a lead female who you can't help but root for, which in itself puts it into the upper echelons of shoujo anime adaptations.

You can currently watch My Little Monster in streaming form right here at UK Anime Network!

8
It has its flaws, but My Little Monster is a well-crafted romance series with perhaps the most likeable and relatable female lead the genre has seen in some time.
LATEST REVIEWS