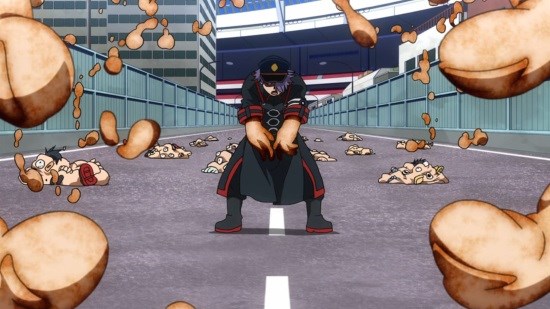 The Provisional Licensing exam has been well underway the last few weeks on My Hero Academy and oh boy has there been a lot of chaos. In the first part, we had Todoroki fighting off a bunch of Power Ranger rejects, Bakugo getting Cronenberged, and, most importantly, Froppy getting wrapped up in a blanket like an adorable Best Girl burrito. When things calmed down and the ball-slapping was done, everyone in Class 1A had passed by working together and wearing Main Character plot armour.

With the first portion of the exam finished, those who have succeeded are gathered into one room and watch as the entire arena they were just battling in is destroyed by a series of explosions and a large group of fake bystanders are sent into the rubble. The next task in front of the young heroes is a search and rescue operation. This proves to be difficult for our UA students, as their lack of experience means they are not as adept at putting on a brave face for the benefit of those they seek to protect. However, in classic anime style, they rally and get their act together in time for the next twist.

Boss Orca, the number ten hero in the world with the power of… looking like an orca? They’re a bit unclear there, but he shows up with a group of faceless goons to play the role of villains, attacking the heroes as they attempt rescue operations. Now they must balance between getting the bystanders to safety and fighting off this new threat to their lives.

Being honest, I was a little disappointed that everyone has succeeded thus far. Yes I know these are our main characters and yes I know this is the greatest of shonen tropes where everyone succeeds through the power of friendship, but it just takes away a little bit of the tension when it feels like there are no consequences. After the high stakes of the All for One vs All Might fight, it seems unsatisfying that even Minata passes this portion of the exam.

This lack of tension isn’t helped by the most recent episode being filler and shameless plug for the My Hero Academia: Two Heroes movie that is coming out in the US shortly (See it at this years Scotland Loves Anime - Ed). However, I will forgive this usually severe transgression because they give us more All Might pretending to be a villain in a story that takes place before the incident at the summer camp at the start of the season. Deku and his classmates must solve a murder mystery as part of their studies. There are tongue in cheek references by the characters that, yes this is filler and yes it is basically a plug for the movie, but honestly, I love Christopher Sabat’s All Might exclaiming “I am here, sneaking in through the back door!” enough to forgive almost anything.

This batch of episodes seemed to serve as an opportunity to build up our heroes as much as possible. We saw Yayorozu finally taking the lead and using those big, beautiful brains (He said BRAINS - Ed) of hers to work through her anxiety and insecurities. We saw Uravity struggle with the fact that she is 100% in love with Deku (who saw that coming?) but that she cannot tell him because it would distract them both from their ultimate goals. We even saw Yuga, who was getting through his hero training by hiding and crying, throw himself into danger for the good of his fellow classmates. All of this growth is likely to be strained in the coming episodes, preferably with a few of the students cracking under the pressure.

I am looking at you, Minata.

The performances remained solid. Ms. Joke, my standout from earlier in the season, was mostly subdued, speaking to Aizawa with a level of seriousness that showed she was not merely a gag character but also a competent teacher. If anything, it was the filler episode that had the greatest impact on me, reminding me just how much I adore Sabat as the jovial and occasionally silly symbol of peace and making me sad that it is something that may be missing going forward.

We have just a few short episodes left in this season, including the dust up with Boss Orca and his thugs as well as the fallout from the exam itself. I’m pretty shielded from spoilers, but I have the growing suspicion that Bakugo knows the source of Deku’s power. He’s aware that Deku is “borrowing” the quirk and that he is being groomed specifically by All Might. It wouldn’t take much to put the two together, given the fact that All Might is now open with his weakness. The boy is impulsive and angry, not stupid. How the literally explosive Bakugo will take this news is anyone’s guess, but considering Aizawa drew parallels between the two so overtly that I expected Ms. Joke to pop up and comment on the amount of foreshadowing going on, a fight between the young heroes would not be out of the question.

This arc likely won’t go down as my favourite in the show but even less good episodes of MHA are top tier anime so its hard to complain. I can’t wait to see how the season wraps up and where we go from here when it picks up again in April.

What did you think? Got a hot take to share? Who do you think should have been in the Best Girl burrito? Let us know in the forums or on your favourite social media.