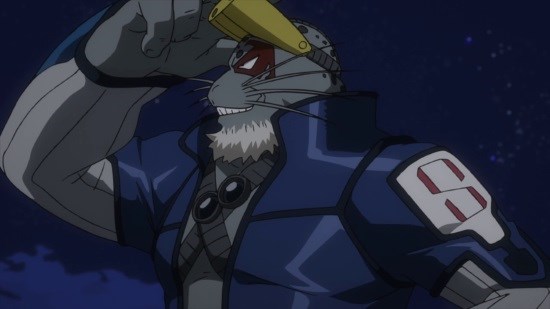 Hurray, it’s time to watch the latest adventure of Froppy, the greatest new hero of the UA hero Academy. With her incredible powers she’s going to lick crime into shape! In this latest vol- What’s that? Review the whole thing? But wh- Because that’s my job? But- Erm, Ed….What are you doing with that stick…?

Ahem, So then, let’s take a look at My Hero Academia Season 2, part 2 (featuring the adventures of Froppy).

So with the sports festival concluded it’s time for Midoriya and the other UA students to get back to their training to become full-fledged superheroes and for their first task they’ll need to pick hero names (and thus Froppy arrives to *whack* oowww…) But sadly for our heroes-in-training, things aren’t going to be fun and games for long as the Hero-Killer, Stain is hunting heroes on the streets. As the gang head out on their internships with senior heroes they’ll risk coming face-to-face with this deadly foe.

So (kero), all joking aside this volume of My Hero Academia does start off on a huge high with ‘Time to Pick Some Names’, which is just full of the wonderful, irreverent jokes and bizarre character beats which show off everything that the show does best. In fact it’s impressive that this volume contains both of the show's absolute best episodes to date (including the currently streaming third season) between the aforementioned name-picking episode and ‘Everyone’s Internships’ which really DOES feature a full blown adventure for Tsuyu (Froppy) which is fun, action-packed and packed full of great gags and character beats. These two episodes are easily 10/10 episodes (and we honestly would love a full series that's just about Froppy and Captain Selkie) but sadly we eventually have to get back to the main plot and characters which are still suffering from the same issues as they have been for a long time now.

The thing is that My Hero Academia is possibly the most stereotypical shounen show around at the moment and it hits pretty much every single one of the tropes of the genre at full speed without really stopping to think about how it’s going to deal with them (in much the same way that some of its characters use their powers). Midoriya’s powers conveniently seem to be the answer to every problem and despite the supposed downside of injuring himself with every use of his powers he gets healed so quickly that there’s never any real sense that this has any cost to it. The main villain for these episodes, Stain, despite being talked up by both the characters and a foreboding voice-over just never really does anything. Whilst the character’s fight with him goes on, some people get a few cuts and that’s it. All the supposedly serious stuff he does happens off camera and for all the foreshadowing there's actually no consequence to the whole affair at all. No-one even really seems to learn anything. Such things have always been a trademark of shounen series but normally there’s at least some kind of result – a character gets a new weapon/outfit or a new ally is discovered, but here it’s just back to business as usual.

Visually, if you’ve been following this series you know what to expect by now with character designs that run the whole gamut of quality though they are all animated well and the Blu-ray transfer does look great. The soundtrack is solid if unmemorable although the English dub is sadly pretty terrible with pretty much every character sounding awful. It’s possible that this is a side-effect of the simuldubbing process which you can learn about in more detail by watching a surprisingly detailed featurette in the special features (the special features as a whole are pretty impressive here!).

Whilst it’s possibly unfair to criticise a shounen show for being a shounen show, in this day and age you do feel that there should at least be a token effort to push the boundaries out a bit and explore the vast potential of the set-up and characters you have (almost every other character is vastly more interesting than the fours leads of Midoriya, Bakugo, Todoroki and Iida). As such unless you’re already invested in the series and its characters you won’t find too much in this volume which, whilst it does show the series at the best it’s ever been, also shows that it lacks the ambition to really play to its strengths for more than brief moments. There are diamonds in the rough of this show but you’ll need to decide if you want to spend the time to sift them out.