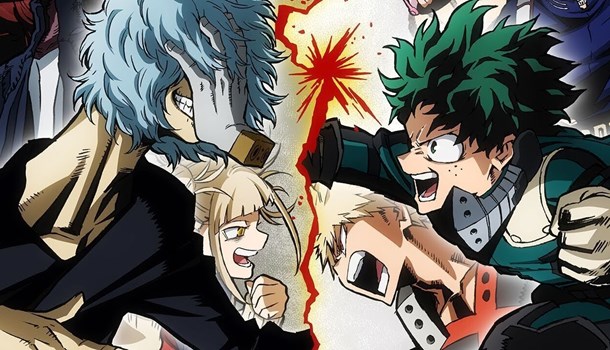 The Provisional License Exam came to a head for our beloved Class 1A students and the results were quite explosive. Everyone in the class passed except for Todoroki, who got distracted from his task of slowing down Boss Orca by someone who somehow has even bigger issues with his father than he does, andBakugo, who… well, have you met him? He’s just the worst. Everyone else passed, earning their provisional license and with it, the responsibility to use their quirks in reasonable, measured ways.

Deku promptly gets pulled into a fist fight with Bakugo, who has figured out the source of Deku’s new quirk and demands some answers. In the end, Lord Explosion Murder comes out on top, proving that, for the time being, he is still the top dog between the two of them. After a heart to heart with All Might, the two frenemies seem to be settling into a more traditional rivalry than before. Whether this new status quo lasts is something to be seen but it was a nice note to end the season on.

But not so fast my friends! We’ve got a bit more silliness to throw at you before this season ends! The class is informed about the prospect of doing real work experience and gets the chance to try their skills against a naked, phasing, disappearing third year student who immediately captured my heart by being so beautifully ridiculous. Mirio makes short work of the entire Class 1A group, proving that his creative and honed use of his quirk is the level of skill that the young heroes must strive for.

As this third season of My Hero Academia draws to a close, questions are answered and new ones pop up. We get some insight into Twice, a member of the League of Villains, and are promised an eventual showdown between Deku and Shigaraki in the fourth season, which is something that has been hinted and teased at since the fight between All for One and All Might earlier this season. These two successors of opposing legacies seem destined to clash again and that alone is worth getting hyped for this coming April.

The star of these episodes, though, was undoubtably the fight between Bakugo and Deku. It was the emotional heart of the end of the season, particularly the moment where Bakugo reveals his perceived guilt at All Might’s lost quirk. It was a surprisingly vulnerable moment from the usually angry young man and Clifford Chapin delivers these lines with such skill and impact that it quickly became one of my favourite moments in a season that already has my new favourite villain in anime in All for One.

Similarly, Justin Briner’s [Ed – I thought that was Justin Bieber then for a second…] Deku remains a delight, earnest and eager to prove himself against his childhood rival. The animation is some of the best we’ve seen in the show so far, smooth and crisp and exactly as energetic as it needs to be without becoming unwieldy and difficult to follow. The entire fight is a great example of what I love about My Hero Academia. It is filled with tropes and clichés, from the prolonged inner monologues to the over the top facial expressions to Deku finding a new level of strength halfway through. But for all the tropes the show has, it delivers with such heart and soul that it is impossible not to love.

These are some of the best written young people in anime. They have exceptional powers, sometimes powers they lack the ability to fully control or that they haven’t fully unlocked yet, but they are also insecure, relying on their teachers and mentors to show them the path through the darkness that is high school. They may be becoming heroes capable of saving the world, but, as All Might says as he comforts an apologetic Bakugo, sometimes we forget they’re just children.

Perhaps my only complaint about the season is that the episodes after the Deku vs Bakugo fight felt somewhat tacked-on. After the emotional climax of these two exceptional characters coming to terms with their fated rivalry and Bakugo being brought into the tight circle of those who know the origin of Deku’s power, the remaining two episodes of the season feel a bit tacked on and out of place. Entertaining, to be sure, but lacking the emotional heart of the previous encounter.

Still, with the third season of the show coming to an end, there is a reason it remains one of the big current shows. Between the summer camp arc, the battle against All for One, and the long-awaited battle between Deku and Bakugo, this is probably the strongest season so far. While it will be painful to wait all the way until April for more episodes, at least the film, Two Heroes, is getting a theatrical release across the UK in December to tide over those of us who couldn’t make it to the Scotland Loves Anime screening earlier this month. I’ve already got my tickets!

So what are you looking forward to in the new season? What predictions do you have? Give us a shout on social media and let us know!

8
An emotional fight with some extra bits.