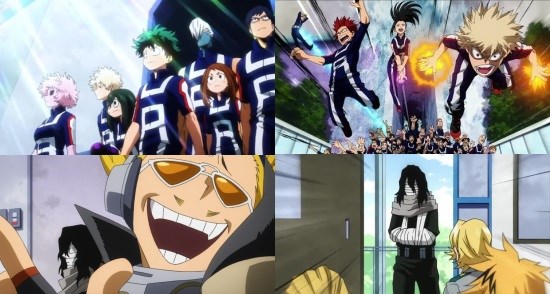 Last year’s My Hero Academia proved to be something of an underwhelming show last year. It was a success to be sure, but at the same time never quite lived up to the colossal marketing push and hype that preceded it. Now however, the gang's all healed up and back for round two, facing off against fellow over-hyped (but financially more successful) shounen show Attack on Titan’s second outing. Can the trainee heroes of UA High School quirk their way to success a second time around?

Following the events of season one, our heroic wannbes are all heading back into school life while aware that they’re now firmly in the spotlight having fended off the army of villains that tried to call a halt to their field training. There’ll be little time to rest however, as U.A. High isn’t going to slow down the curriculum for anyone and are kicking off their renowned sports festival. This will allow the students to show off, advance to other classes and be mulled over by hero teams who might want them to join. It’s a big deal, and All Might has decided that his young protégée should be the one to stand up and make sure people take notice!

There’s always been a pretty fun sense of inventiveness about My Hero Academia which tends to be one of its strongest points, but boy does it start to wobble here as they pull out every cliché in the book for the start of this sports festival/tournament arc. Everything from completely new rival characters to insane last minute victories are thrown at the audience to try and make something stand out. Fortunately though it just about does. The opening event's obstacle course proves to be pretty entertaining rather than the series of one-on-one battles I was dreading when they were setting up the arc (though there is still the worry things might devolve to that level later on), and the students using their various quirks to overcome the obstacles in their path proves to be great fun.

In a way everything is still very much as it was from season one, with little to no progression either in the characters themselves or in the production on-screen - for better or for worse everything that was good about season one is still just as good, but so is everything that was bad and sadly the things that have always been issues remain a pretty big deal. The vast majority of the character designs aren’t great and fluctuate between too simplistic and too messy (sometimes on the same character), and as always there’s the constant sense that there’s a vastly more interesting show that you aren’t getting to watch as whilst the series follows dull protagonist Midoriya and his even more boring rival Bakugo you get constant glimpses of other vastly more interesting-seeming characters on the sideline. A girl with audio jacks coming out of her earlobes?  Where’s her show? The teacher characters only bolsters this feeling, and the near-constant desire for them to just take All Might and company and spin them off into a Tiger & Bunny-esque series distracts from the main plot.

Then again, season one did admittedly pick up steam after it hit about the halfway mark so this season could be following the same template and taking some time to hit its stride, although admittedly that’s not the moist ideal way for a series to kick things off. If nothing else the music is pretty good and the voice cast are pretty great at lending bags of character to the cast, especially Kenta Miyake as All Might, who is consistently the series' best creation hands-down.

In the end if you enjoyed season one at all then you’ll continue to enjoy this, and thanks to the Funimation/Crunchyroll alliance it’s much more widely available than the show was last year - as is the show's first season so if you missed out the first time round, so it’s not going to take all that much time and effort to go and start from the beginning to see if you want to continue through to season two.

You can currently watch My Hero Academia in streaming form on Crunchyroll.