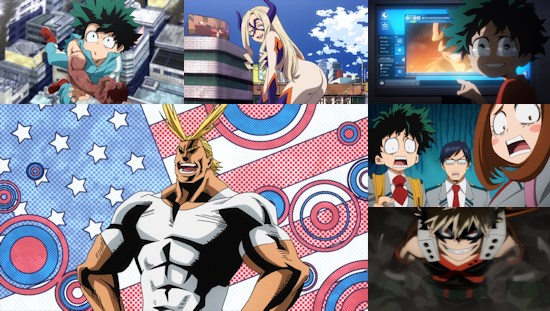 In case you haven't noticed, superhero fiction is rather a big deal these ways, dominating the realms of Hollywood blockbusters and branching out into every area of pop culture. Unsurprisingly, anime has tried to get in on the act, whether it's spoofing its own shonen genre with the likes of One-Punch Man or offering up a unique take on superheroes in Tiger & Bunny. Now we have another recent superhero hit arrive on UK home video, with Universal Pictures taking on the distribution reins for Funimation to bring us the first season of My Hero Academia - a perfectly timed release one could argue, with its second season currently in the middle of streaming.

The world of My Hero Academia is one where superpowers really aren't all that super at all - in fact, after the discovery of the first super-powered baby some time ago, the vast majority of humans are now born with some form of power, or "Quirks" as they're known. While these abilities range from the mundane to the incredible, the dramatic rise in Quirk users has led to some inevitable societal problems - a rise in crime from those abusing their abilities, which in turn has led to the birth of professional heroes to tackle problems which prove beyond the capabilities of the police force.

Our protagonist, Izuku Midoriya, is a boy who has always idolised hero, and in particular one hero above them all - All Might, the greatest living hero. Izuku is determined to follow in All Might's footsteps as soon as his Quirk manifests... except it never does. Midoriya refuses to give up on his dream, but that leaves him open to ridicule as a figure of fun at his school where the disconnect between his desires and reality are brutally exposed, not least by his childhood "friend" Bakugo.

Midoriya's body may not be willing, but his mind remains a flurry of analysis of heroes and their methods, and when push comes to shove his thought processes are exactly those required of a brave, valiant life saver. When these qualities show themselves in the midst of a perilous situation - and in front of All Might himself, no less - Midoriya proves that perhaps he does have what it takes to be a hero after all if he were just given a rather significant helping hand...

When you strip it down to its core, My Hero Academia is a very typical shonen series - a seemingly weak or ostracised lead character gets to achieve their dreams through hard work, talent or (as in this case) a combination of the two. In a sense, that realisation only makes what the series successfully does all the more magical, as it manages to sidestep ever feeling like "just another shonen series" and instead provides something altogether more compelling thanks to a fantastic roster of characters and strong writing throughout.

The feeling that the series is something special hits you pretty fast - the first couple of episodes of the show are an emotional rollercoaster, and by the end of it all you're entirely engaged with Midoriya's emotional state and desperate to see him achieve his dreams. The series makes no secret of the fact that this will happen - Midoriya himself narrates this tale as the first step towards his becoming the world's greatest hero - but it really doesn't matter when it's the journey to get there that's important.

Those raw emotions take something of a back seat after the premise and origin story of Midoriya are set up, and from that point forth the series shines in an entirely different way - by throwing our protagonist into hero school (U.A. High School to be precise) to engage in all manner of training that makes great use of the show's wider cast. From the teachers through to their students, no character is wasted - everyone gets some time in the spotlight to strut their stuff, and they all turn out to be a likeable (or suitably) loathsome bunch that helps the series power through moments that would otherwise seem dull and arbitrary. Of course, there's more than just school life shenanigans at play here, and the end of this first season brings the terrifying reality of a life fighting against malevolent villains to the fore early on for Izuku and company.

Upon originally watching the series week-by-week as it streamed to the UK, I wasn't the only one to have complaints about the pacing of this first season - it waxed and waned, taking too long over things that felt like they didn't require so much time afforded them. Interestingly, rewatching the series en masse via this Blu-ray release, a lot of those problems seem to dissolve away - there are certainly still slow moments that drag the pacing down, but they're relatively rare and for the most part episodes keep things ticking over smoothly. It seems that this is a series best watched in large chunks, for my money at least.

Backed up by that stellar cast, My Hero Academia has plenty of other strings to its bow. The show's action when it comes is always animated with a real verve, capturing the speed, power and danger of a given situation as is required of it, while on the other side of the fence there's some strong visual comedy that crops up as needed. Its villains, when they arrive, are suitably sinister, and even before they come along there's plenty of enjoyable goings-on to keep the cast on their toes and put Midoriya and company through their paces. Throw in an excellent soundtrack that also helps the show to power along, and My Hero Academia barely puts a foot wrong in its presentation.

The show's original Japanese voice cast takes some beating, but it should be said that the English dub here is decidedly strong - it takes an episode or two for the main cast to get into their roles but once they do the English dub is largely equal to its counterpart, and you won't miss anything if that's your preferred poison. Subtitles are good throughout, save for one glaring error where Midoriya's class at U.A. is noted as having eighteen pupils when there are in fact twenty - a fact that the English dub gets right. Maybe they just don't have maths classes at hero school?

We received the full Collector's Edition retail package of this release for our review, and it looks gorgeous - lots of strong, striking and colourful artwork that matches the series contained within, and the inclusion of a book packed with character design illustrations is a desirable part of the package. Also bundled here is a notebook, which is useful but unspectacular, and a keychain featuring Midoriya which is decidedly cheap and cheerful and by far the weakest part of the package.

Perhaps the biggest bone of contention here is the price of this collection - with an SRP of £76.99 it's substantially more expensive than other Collector's Editions we've become used to, and even with retailer discounts it's still on sale for around the £55 mark at the time of writing. Let's be up-front here - this is too expensive for the actual contents of the release, and it sorely needs a price cut of another £10 or so to bring it into the realms of other Collector's Edition releases. Hopefully this is a lesson that both Funimation and Universal can learn from with future similar releases - or, alternately, they can at least accelerate releasing a Standard Edition to reach the (undoubtedly substantial) market for this series for whom this edition is too rich for their blood.

Pricing qualms aside though, this is a strong release of a great series - slick, colourful and fun, but with some real emotional weight to it than it can bring to bear when necessary. Even if you're bored of superhero stories or typical shonen fare, My Hero Academia manages to feel sufficiently fresh and different to sidestep being tarred with those brushes, and when it's consumed in chunks of episodes in particular it's an even more compelling experience.

8
A fresh and colourful take on superhero stories and the shonen genre makes for a must-watch series, even if the price of this Collector's Edition is a little rich for our tastes.
LATEST REVIEWS