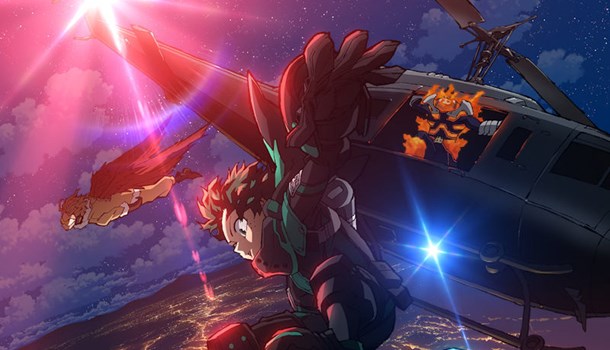 Heralded as the successor to Naruto since the manga began, My Hero Academia was always destined to become a globally successful franchise. Seven years in, the teenage superheroes’ adventures have been told across 32 volumes, five seasons of TV and now three feature films. The latest of these, World Heroes’ Mission, is an apt celebration of the series’ international acclaim.

The premise is exactly what you’d expect from the title – the stakes are higher than ever, and the heroes must work fast to save the whole world from disaster. This time around, the villains are a eugenicist-like cult known as “Humarise” who seek to wipe superpowers off the face of the Earth entirely, causing Deku & co. to relocate to Europe as they tackle the evil plot.

The globe-trotting nature of the film more-or-less stops after the opening scene, however, with Deku remaining in the fictional nation of Otheon for the remainder of the story. Things get complicated for our protagonist when he attempts to stop a robbery, and he and a jewel thief named Rody Soul are framed for the murders of twelve people. What follows is a charming road movie of sorts that sees Deku and Rody fight to save the world without alerting the attention of the corrupt Otheon authorities, who themselves are involved in Humarise’s evil scheme.

Some interesting themes are raised here, as Rody is revealed to be a victim of anti-metahuman hate crime, and the villains are quite clearly depicted as an analogue of White supremacist groups – although all the Humarise members we see are also metahumans, hoping to “redeem” themselves. It’s not exactly handled with much nuance, as the issue is resolved via fight scenes and friendship monologues, but it’s an interesting bit of worldbuilding for the series nonetheless.

The heroes’ fights against the Humarise soldiers are superbly animated, and while director Kenji Nagasaki has yet to top the explosive final battle of Heroes Rising, it all looks so, so good on the big screen. Expect far more brawn than brains, however, as the outcome of each superpowered tussle is decided almost solely by who can hit the hardest.

World Heroes’ Mission is bound to be enjoyed by existing fans of the My Hero Academia franchise, and perhaps anyone who’s just looking for a superhero fix between Marvel movies. It hardly sets a new bar for cinematic shonen showdowns, but it’s plenty of fun all the same.