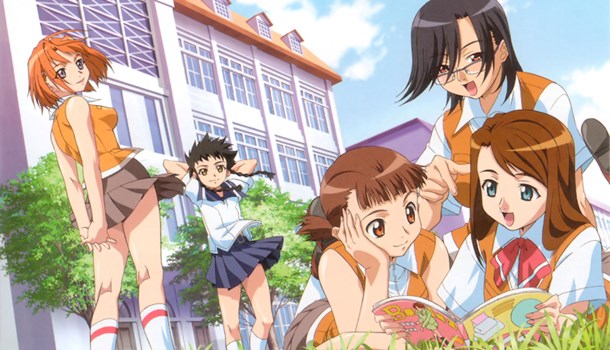 Ah, to catch up with My HiME. The first couple of volumes were pretty average fare if we're honest - the usual school hi-jinks and cast of stereotypes (ditz, rebel, average girl, angsty lead etc) albeit presented in a nicely drawn way, with reasonable voice acting.

The real meat of the story came at the end of volume 2, and although volume 3 starts in a low gear, we hit a stride by volume 4 and 5. Since we're covering quite a wide range of discs here (partly down to late delivery and a heavy schedule breathing life back into Anime Connect for MVM) I won't go into great detail about each particular disc, but I can give you a sense of whether or not the series to date justifies the investment.

And it does. Just. There were times where I was a little bored in early volumes, but I put that down to my over-exposure to anime rather than any inherent faults with the series itself. As soon as we lurch back into the day-to-day school routine and away from the central plot, I wanted to hit the fast forward button. But I didn't, and it's for the best. My HiME does manage to create a sympathetic social network, and it's key to the emotional impact of later episodes, so I suggest you keep your finger off the button too.

Mai herself makes a good lead - torn between her ailing brother, the duties of a HiME and a desire to lead her own life, she captures the tragedy of being an unwilling battle princess better than her fellow warriors could - her heartbreak in volume 5 is palpable and moving. The series is at its best when it ditches the humour (which is weak at best) and amps up the angst to genuinely moving effect. The series has certainly raised its game.

Similarly other characters become more complex, and as the HiME start to battle each other, the stakes are high for everyone.

The English vocal work is solid if not outstanding, and we could all do without the texas drawl of the High School Council Rep, but generally it's good stuff and conveys the emotion well - that said you'll never top the hi-pitched efforts of the Japanese original ^^

I've been watching the series when I go to bed around midnight, and I always want to watch "One more" before turning out the lights - a sign if ever there was one that the series has managed to hit a confident stride, and with volume 6 ever so close, I'm looking forward to the finale - lets hope its a good one!