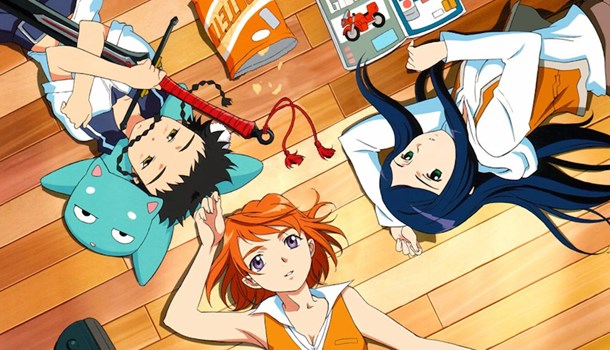 From the studio that brought us Gundam Seed and S-Cry-Ed comes another mix of action, romance and teenage angst. Transfer student Mai Tokiha has one hell of a first day – travelling by boat with her fragile younger brother to the mysterious Fuka Academy, she gets involved in a fight between two girls – one carrying a sword, the other a pair of pistols. Once things get… explosive, she arrives in a blaze of fire at the school, and from there things get really odd.

As we delve into the school’s secrets, we learn of the HiME, a group of girls blessed with supernatural elemental abilities, such as fire and ice. Each HiME has a child, a creature that protects its mistress and fights against creatures known as Orphans, entities from another world which awaken on Earth in the guise of horrific beasts. The HiME are charged with defeating these creatures, but it seems the school has its own plans beyond this seemingly noble endeavour...

The series mixes action and comedy to great effect, with episode 4 providing some great ecchi giggles as an Orphan panty-thief causes utter havoc at the school, and as such My-Hime joins the elite ranks of anime comedy that I find genuinely laugh out loud funny, a rare accolade indeed.

The cast themselves are lively and entertaining, but for the most part we’re ticking the boxes here – spunky heroine, cute, feral sidekick, fighting girl with an attitude and mysterious figures lurking in the background. It’s all been done before, but the writing seems strong enough to carry these episodes, and time will tell if My-HiME can rise above its stereotypical settings and provide something truly memorable.

Production values are solid rather than stunning, with the bright colours and sharp designs providing some enticing eye candy, but the fan service is strong with this one. Probably best not to watch it in front of the parents…

My HiME volume 1 gets a generous number of extras. A 16 page booklet provides information on the characters and the school itself, with lots of interesting tidbits to pick through. The disc contains some production sketches, the usual clean opening/ending animation and some exclusive animated shorts that expand on the HiME episodes with background information, which helps to enrich the experience.

8
Funny, with an interesting cast and never a dull moment. One to watch.