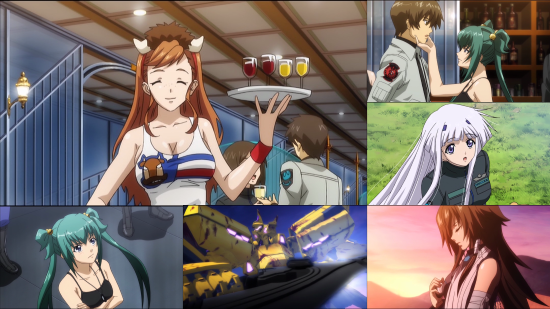 I have come to the conclusion that I greatly miss the old Starship Troopers Roughnecks TV series. I miss it for many reasons, firstly being that the characters felt real. They died, and when they died you missed them. Okay, so the writing left a lot to be desired, but the battles and the actual feeling of peril made the younger me wake up early every morning for months just to catch the next episode. I wish that Muv-Luv Alternative had even a smidgen of the class that show had. So far it is lacking in characters, combat and story, and I honestly think that the only reason why I kept going was the hope that the BETA would finally rid me of the tedium.

I actually think BETA is an apt name for the “enemies” for this series. Even though they, as the invading alien species, are categorically wiping out the human race and forcing great waves of humanity to evacuate their lands and live in former cold war enemies’ countries, simultaneously as huge swathes of humanity are forced to survive on meagre food rations, those working for the military get to enjoy all the joys of life, alcohol, entertainment, ample food, and romantic tedium with a multitude of desperate buxom ladies. The alpha characters in this series are truly those who just want to fly pretty mecha and shoot stuff, all surrounded by romantic fluff that in the end doesn’t actually go anywhere.

As you can probably tell, I have a bit of a problem with the second half of Muv-Luv Alternative. In our first review, I had my fears that this series would turn into the dull tedium of a story set in a world being destroyed, that actually wouldn’t even offer comment as to how the world will be saved. Unfortunately, my fears were realised. In part one, Yui presented the world with a brand new kind of weapon. A gun, that when fired, would immediately vaporise the BETA. It was amazing, and actually provided some reason for her to be with the test crew for the TSFs. But when this gun was all but destroyed after the Soviet forces abandoned the base and left them to die, well, I am surprised more of a fuss wasn’t made over the loss. Of course Yui and Yuuya were rescued, admittedly thanks to some quick thinking on Yuuya’s part.

However, as becomes evident later on, the whole abandoning of the base, as well as other major cock-ups higher up the command line, are actually all part of a series of conspiracies. The first is organised by the Soviets as a part of a former cold war plot against their old adversaries the USA and their attempts to turn the “Scarlet Twins” into a perfect weapons; the other plot was concocted by rebels acting against refugees who were being starved by the UN. However, so convoluted and badly thought out were these plots that they eventually failed primarily due to the interference of the Yukon base test pilot crew. Both plots almost lead to the destruction of humanity, as no one had quite realised the stupidity of the USA in their deployment of huge hydrogen bombs...

In all fairness, with all this action going on, the series actually wasn’t dull at all. Unfortunately, these plots took so long to come to fruition that there is almost a full disc worth of useless romantic pandering, duels between the fighter teams and hot spring and beach filler episodes before you get to the good stuff. No, I didn’t consider the hot spring scene to be the “good stuff”, although, the one bonus of having this filler episode is so you could see all of the good stuff, if you catch my drift.

I suppose when it comes down to it, Muv-Luv Alternative has at least delivered some form of ending. Okay, it isn’t the ending or even the story which I wanted, and in the end it barely involved any of the BETA, but rather the political sides of the world showing that perhaps it isn’t the gigantic rampaging man-eating insects that are humanity’s greatest enemy, but rather that it may be humanity itself. That’s fine - not exactly original, but it’s a fine message to convey. But why oh why did the series try so hard at being a harem romance into the bargain? I know this is the whole concept of the visual novels, and I wouldn’t complain if it was actually good. I love harem anime. But when the main character is so completely disinterested and the main love interest’s personality changes from a strong female character into a damaged kitten, I just lose all interest. If anything, it was the death of another character that actually left a bitter taste in my mouth and affected me the most, as she was perhaps the most likeable character in the series.

In the end, Muv-Luv Alternative's second half is not what was promised, and the highs of part one have long since vanished by the mid-point of these discs. Yes, there are dramas and thrills to be found, but these are few and far between, stuck between hours of romantic nonsense and poor pacing. It’s hard to hide my disappointment, but if you are a fan of the franchise, don’t let my comments sway you from this otherwise well-presented release.

5
Disappointing, but only because it isn't what I wanted it to be.