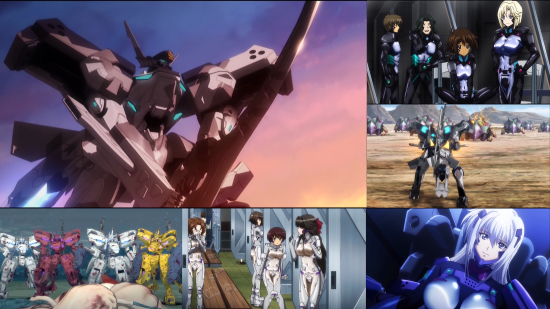 I'd suggest that Muv-Luv takes a lot from Starship Troopers, and by that I am not just referring to the fact that both series use big human-devouring space bugs as the focus for humanity’s aggression.

Set in an alternative history universe where the moon landing of 1969 was actually a moon war fighting off invading hordes of alien bugs called BETA (Beings of an Extra-Terrestrial origin that is an Adversary). The BETA, due to their sheer size and variety, required humanity to develop new methods of warfare to survive. This is where the series highlight, the TSF (Tactical Surface Fighters) come in. These huge mecha are all that stands in the way of the insects as they annihilate humanity one country at the time, eradicating everything in their path with their myriad forms. From the small (but still car-sized) soldiers to their aircraft carrier sized fortress classes, they plough their way through humanity’s every last defence, eating everything in their path. A bit like myself at a Chinese buffet...

The series starts in an odd way. I would almost put the first two episodes into a completely different series to the rest of this collection, as they are not only brilliantly produced and thoroughly distressing but because they are light years ahead of what comes later. Muv-Luv Alternative: Total Eclipse starts simply enough - with a flashback of sorts. The history of the conflict against the BETA is told and we are led into the academy life of Yui Takamura, who is studying to become a TSF pilot and a soldier in the Japanese Royal Guard. We are introduced to her friends, adversaries, and their sometimes playful lives at the academy as they learn the art of being a good pilot and the gain the skills required to combat the BETA. I won’t introduce her friends as, quite frankly (and this is a bit of a spoiler) none of them actually survive long enough for any attachment to the characters to kick in. During a training mission, Japan is invaded by the BETA, and the entirety of the defending Royal Guard in the imperial capital of Kyoto are annhilated by the BETA hoardes in a festival of gore, blood and inhumanity. These girls, who moments earlier were being friends and having fun discussing the lighter things of life, cease to be.

This is where the series parts company with its “good” self and dives into the tunnel of mediocrity. We jump ahead a few years to meet up with Yui again as she joins an international group of test pilots based out of Alaska, whose sole purpose is to co-operate internationally to develop the next generation of TSF to fight the BETA. Unfortunately, her time in the spotlight has passed and is now given to Yuuya Bridges, a Japanese-born US citizen, and the rest of the international team. It is at this point where the real character development begins, discarding everything that came before with barely a mention. The pilots and their new units progress through development, testing and combat training against the Soviets and Chinese, politicking for the best position in the programme. Meanwhile, befitting of Muv-Luv’s light and visual novel origins, a romantic rapport begins to form between Yuusa and Yui just before they are shipped to the front lines to test a deadly new weapon.

My comments above are probably best explained by stating that I am new to the franchise as a whole and, based on the setting, I had expected a more detailed story focused largely on the turmoil and conflict on the front lines, rather than at a test base. If I was writing a show I would have concentrated more on the action on the defensive lines and the moves made to combat the threat rather than the joys of chasing around a base trying to fight against Soviet lolitas with a taste for expensive stuffed toys. The series has a lot of potential as the first episodes showed, and to see it wasted put a dampener on my hopes. Admittedly, seeing the story actually get back on track towards the end of part one of the series raised my hopes - especially as tensions rose amidst treachery - but this was in itself badly told and highly transparent to the point where obvious plot twists were completely predictable, which is an absolutely crying shame.

Muv-Luv Alternative: Total Eclipse is well animated, well acted in parts (as long as the English dub is ignored) and the universe is very detailed. I can only guess that huge quantities of content is covered in the light novels, and actually what the anime represents is just a small and inconsequential glimpse into this universe. If this is the case then what I think we are being presented with here in this animated series may be the ugly duckling in the franchise. I can only hope that the tense storylines hinted at towards the end of this collection are continued, otherwise I fear this is going to turn into a very dull series that just happens to be set in a world undergoing alien destruction. It does lead me to wonder whether I might have gotten more fun out of rewatching my old Roughnecks (the animated Starship Troopers series) DVDs instead for my fill of intrigue, politics and destruction of alien insects. Instead, all I got to show from this series so far was a lot of shiny body suits, some notably pretty mecha, and an anime that is definitely not the alpha in the franchise.

6
I asked for Starship Troopers, and all I got was a romance novel.