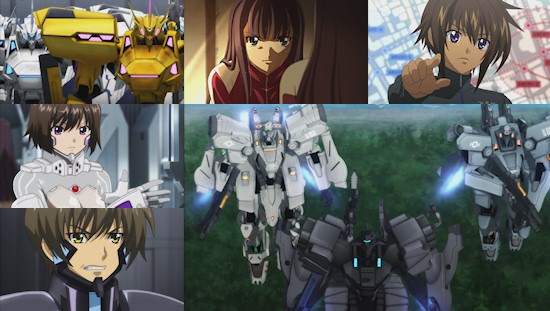 Using phrases like "multi-media franchise" in the opening line of a review makes me feel like I've spending too much time reading press releases lately, but nonetheless it's a descriptor that fits pretty well when discussing the world of Muv-Luv.  After starting its life as a visual novel, this mecha-cum-romance series has spun-off into manga, novels and now an anime for this summer season.

More specifically, Total Eclipse is an adaptation of a story which began its life as a novel - thankfully, although its a spin-off of a sequel the opening episode of this streaming outing does at least spend a little time sending the scene, introducing us to mankind's first contact with extra-terrestrial life as they visit the moon only to find that the welcome they receive is far from a friendly one.  Before we know it, humanity is locked in deadly conflict with the so-called BETA, and when this conflict moves from the Moon to Earth things only get worse.

Of course, there's only one thing for it when aliens invade - get some high school girls to dress up in skin-tight Lycra suits and pilot giant robots!  The first two episodes of Total Eclipse thus fast-forward us into the 1990s and place us within the Imperial Guard Training Academy, where a group of girls are being put through their paces to prepare them to handle the BETA threat.  In a move which motivation experts across the world are sure to approve of, these girls are told immediately upon their enrolment that they're unlikely to survive for more than eight minutes in combat, and only those that do have any chance of becoming a true soldier.  Despite this, the girls continue their training on account of their various motivations, before we leap forward a few years further to see the fruits of that training as the BETA reach Japan.

The second episode of the series, which takes in the first true combat for this group of mecha pilots as their task turns from defence of a deeply entrenched position to simply surviving at all costs, is an utterly brutal depiction of the war into which these girls have been thrust - intensely violent, gory and bloody, it gives you a true feel of the desperation of humanity as it's left seemingly dazed and on the ropes.  It's a dark and visceral experience which pulls no punches, even if its attempts at depicting some traumatic scenes are heavy-handed almost to the point of inciting giggles.

If the rest of Total Eclipse were to continue in this vein then we might have been left with a fascinating if horrific series - however, the darkness of episode two is short-lived as it gives way to another jump forward in time to follow one individual from that graduating class of earlier episodes.  By this point, Yui Takamura is a hard-nosed lieutenant with an eye only for her work - a job which involves taking in some of the finest mecha pilots from around the world to research the latest and greatest designs in the hope of turning the tide against the march of the BETA towards exterminating humanity.  This makes the UN-run Yukon Base a rather cosmopolitan affair, and our main focus at this point turns towards American (well, Japanese-American, but he has "heritage issues") pilot Yuuya Bridges, a talented test pilot who finds that he isn't the only one with impressive abilities in town.  With the tension between Bridges and Takamura palpable, and some wildcard pilots in the vicinity, the series all set to... do something. With mecha. Probably.

From its first four episodes, Total Eclipse is perhaps inevitably a scattershot affair - it has back story to cover and the history of its main protagonist to explain before it even gets down to the meat of its story-telling.  The trouble is, these first episodes prove to be the most compelling part of the series thus far before leading us into a dull and generic story subsequent to that which fails to light any fires under the series or its characters, leaving you wondering what the point of it all is.  Doubtless something will emerge to try and regain the viewer's attention, but beyond some pretty run-of-the-mill fare there's nothing notable which stands out at this juncture.

Even during its brighter moments, there's a lot wrong with the series up to this point - it tries and fails to set up a rivalry which it then does utterly nothing of interest with between Takamura and Yamashiro, some of the more shocking moments of episode two threaten to become unintentionally hilarious as characters hammily act out their lines, uttering remarks that raise the "death flag" faster than a speeding bullet, and all of the main characters are ultimately shallow in their depiction and motivations.  On top of all that, some great-looking but inspired mecha designs are offset by the poor CG used for the BETA themselves, turning them into pretty generic alien monsters that don't particularly inspire terror when they finally appear on-screen.

Still, even all of this is preferable to events at Yukon Base, which are so incredibly uninspired that it's tough to even find anything to say about it - its characters are cardboard cut-outs and, let's be blunt, the premise and relationships within the show at this point are hardly Macross Plus.  This leaves us with little reason to recommend the show - its goriest moments are censored for this streaming treatment, the plot is all over the place and its most interesting concepts are quickly ditched for some far more mediocre story-telling.  There are plenty of better mecha series out there, so unless you're some kind of Muv-Luv diehard Total Eclipse isn't particularly worthy of your time.

5
After tantalising us with some interesting moments early on, Total Eclipse drops all of that potential in favour of a disappointingly generic major storyline. Go and watch Macross Plus instead.
LATEST REVIEWS