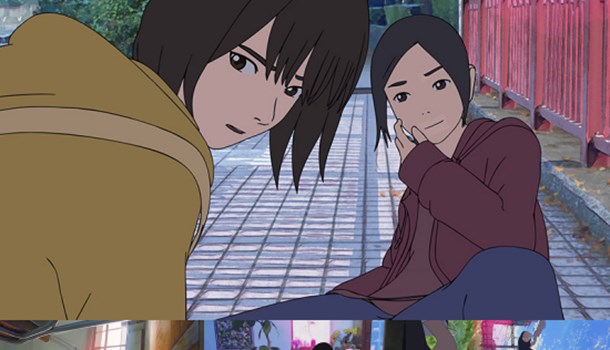 Murder Case of Hana and Alice, The (Theatrical screening)

Is rotoscoping actually animation? Thankfully that's a weighty and long-running discussion that we don't have to actively engage in for the purpose of this review, but it is a noteworthy point in the wider context of this particular film - after all, the visual look of rotoscoping is an acquired taste, to put it mildly.

The use of this technology is all the more interesting in the case of this film, which is itself a prequel to a 2004 live-action film from the same director, Shunji Iwai. Thankfully the fact that The Murder Case of Hana and Alice serves as a prequel means that absolutely zero knowledge of that original film is required, although if you're anything like us you may find yourself scrambling around to try and source a copy of that movie having seen this one.

The setup for the film is hardly unique - a fourteen-year-old girl named Tetsuko Arisugawa finds herself having to adjust to a new home as her newly divorced single mother moves her out "into the sticks", which of course also means transferring into a new school. With a long wait for her new uniform, Tetsuko is left sticking out like a sore thumb, and the start of her new school life really couldn't be much worse as for some reason she can't quite fathom she ends up on the bad side of her entire class who either shun or outright bully her.

At first, Tetsuko assumes that this is simply par for the course as "the new kid", but as it turns out there is far more to her treatment than meets the eye, and a little digging reveals that she's managed to land herself in the middle of some decidedly strange events - talk of a former pupil who took on four wives (no mean feat for a middle school boy) and was ultimately poisoned by one of them, leaving behind a curse that his former classmates are desperately trying to seal.

As it turns out, this whole chain of events also relates to the new next-door neighbour of Tetsuko (or Alice, as she comes to be known after meeting an old friend who also attends her new school), an odd girl who spends her days doing nothing but peeping out of her bedroom window. Rather than accept the status quo, Alice instead seeks to engage with her strange neighbour, Hana, to get to the bottom of the events which have made her life so chaotic.

As films go, The Murder Case of Hana & Alice doesn't necessarily put its best foot forward, either visually or in terms of its narrative. The first act of the film feels like an overblown live-action drama coated with a rotoscoped style, and it's hard to get a real handle on what the movie is trying to say or do as it indulges in the delusional insanity of Alice's class which has all but been turned into a cult by the rumours and myths which permeated its missing former pupil.

However, patience is warmly rewarded here, as this is actually a much-needed setup for the rest of the film, and once Alice and Hana meet up and the real meat of the story begins the results are wonderful. The film chronicles the birth of a great double-act - Alice is as naive as teenagers come, but somehow muddles through her life with sheer confidence and an out-going personality, whereas Hana is the brains of the outfit (albeit just as naive herself) who is nonetheless dragged along to bring closure to all of her worries thanks to her new friend's exuberance. The result is a truly charming story of teenage friendship and one that is easy to relate to - a tale of the mistakes of youth and the even more preposterous mistakes that come from trying to rectify them. It's incredibly funny in its impeccably-crafted comedy scenes, but also a heart-warming story of puppy love and petulant revenge gone horrible wrong, and its two main characters really steal the show once they're united - as they should, they are the billed stars of the film after all.

As we mentioned in our introduction, the visual look of this film is going to be very much an acquired taste, and like many rotoscoped efforts its truly hit and miss. Some scenes within the film look simply terrible - the entire world's gravity feels "off" at times, as characters fall in slow motion or float in mid-air, breaking your immersion in an instant. At other times however, this technique seems like a perfect choice for the films - the realistic movements and behaviour of characters adds to touching or comical moments, and this can be further accentuated by adding an extra layer of anime-esque facial features and reactions to proceedings. The use of rotoscoping also allows for the film's composition and cinematography to take some interesting directions, with angles and shots that would look strange in an outright live-action film coming off as stylish in this rotoscoped environment. In short, this film won't win any awards for its animation and presentation, but on balance, it's probably a good choice of medium to present a prequel to a live-action film in.

Given all we've just said, it shouldn't surprise you that Hana and Alice actresses are the highlights amongst a strong cast that all play their roles well - its early running may feel over-the-top, but as it turns out this is by design and the entire cast sell the film admirably from beginning to end whether they're hamming things up or toning them down.

Overall then, The Murder Case of Hana & Alice is a real surprise; a film that is great fun to watch as it encapsulates the heights of teenage foolishness - and friendship - in a way that is both endearing and charming. Of course, Japanese fiction is no stranger to looking at school life with rose-tinted glasses, but there's something tangible about this particular story that makes it feel like more than just wistful reminiscing for a bygone time. It is, perhaps, a reminder that kids need to be given the space to make their own mistakes and learn from them, and watching Alice and Hana find friendship and learn a little more about themselves in the bargain is a thing of simply beauty that even the more problematic elements of its rotoscoped treatment can't erase.

7
It might be an acquired taste visually, but look beyond its rotoscoping and you'll find a charming and funny tale of teenage folly and friendship.
LATEST REVIEWS