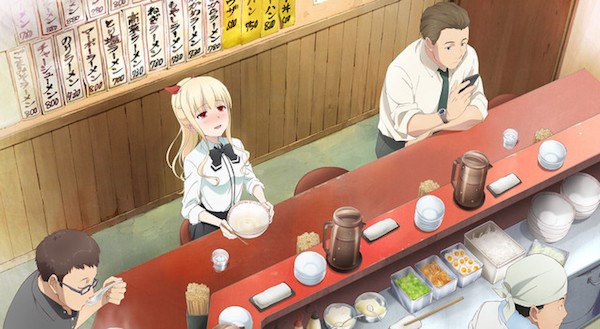 Often I watch mini-anime series (anime with episode run times of less than 8-10 minutes) and wish that they had been stretched out to full length (I Can't Understand What My Husband Is Saying being such an example). Ms. Koizumi Loves Ramen Noodles however is the one time when I wish the reverse was true.

Based off an ongoing manga series from Naru Narumi, the plot is relatively simple. Too simple in fact: high school girl Yuu meets newly arrived Koizumi; a Talented but otherwise quiet, almost withdrawn, new student who refuses to accept the overtures of friendship from Yuu. However Yuu accidentally discovers another side of Koizumi, as the title hints at she has a love (and encyclopaedic knowledge) of Ramen, almost to the point of being obsessive.

Each episode comprises of Yuu trying to befriend (read: pestering) Koizumi, Koizumi refusing her advances, Koizumi going to a ramen restaurant (with Yuu not far behind), Koizumi Eating ramen (and almost orgasming in delight), and that's basically it. Though in the second episode it was Jun and Misa, instead of Yuu, who ate ramen with Koizumi the plot was basically the same. The characters themselves also suffer from being almost one note personalities: Koizumi likes ramen but has the personality of a rock; Yuu's continuing attempts to befriend Koizumi at times verge on harassment; Misa is loud, annoying and a wannabe tsundere; and Jun is the honour student straight woman of the group.

The animation quality doesn't do the series any favours either, with most of the animation budget seemingly put into drawing the ramen dishes. the backgrounds come across as bland, almost cardboard like, with little detail or shading. This results in everything coming across as brightly lit, creating almost sterile environments.

The only positive I can give is the voice cast, with Ayana Taketatsu (Dangashi Kashi, K-on) as Koizumi , Akari Kito (Classroom of the Elite, Record of Grancrest War) as Misa, Ayane Sakura (My hero academia) as Yu, and Yumi Hara (Log Horizon, The Idolm@aster, Overlord) as Jun. All experienced voice actresses, they give a good performance with the material they have.

However that doesn't make up for my biggest complaint, the episode runtime. The series would, in my opinion, work far better as single mini-episodes. At times they make each episode seem to drag on way too long, often feeling twice the length of the 24 minutes they actually ran!

In conclusion with poor quality animation, less than interesting characters, and a concept that seems to leave little to no room for any real development, Ms. Koizumi Loves Ramen Noodles doesn't so much outstay its welcome as it eats all your food, blocks up your toilet, and then expects you to be grateful for it.

You can watch Ms.Koizumi Loves Ramen Noodles in streaming form via Crunchyroll.

4
Poor animation, basic one note characters, and a less than stellar plot - skip this with no regrets.