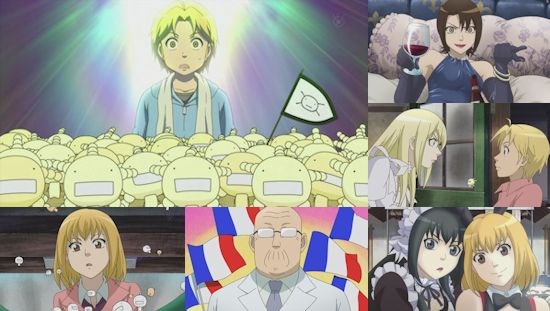 After such a long wait for a sequel, and in spite of its original series not having received a western release (although it's now being slowly but surely added to Crunchyroll alongside its stable mate), we were more than a little happy to see Moyashimon return to our screens - a feeling that I think we summed up quite nicely with our positive review of the first few episodes.

Running through the rest of the series, we find Moyashimon Returns focusing very intently upon a singular story arc - a bit of a rarity for a show which often enjoys meandering all over the place.  Although the big cliff-hanger to episode three might lead you to believe that Sawaki finally manning up and confessing his ability to see microbes to Oikawi is set to be the main source that drives the story forward, it's actually research assistant Haruka Hasegawa that finds herself uncomfortably under the spotlight for the remainder of the series.

Put simply Haruka's father, and his insistence upon her marriage, has run out of patience, and thus we find Hasegawa carted off to Paris to be married to the seemingly uncouth Ryuuta.  As news breaks across the campus, Haruka's friends and colleagues fret over what they can do to help her out in her time of need - a concern which turns to fund-raising and ultimately a trip to France for some of their number as a "rescue mission" dressed up as a request to buy some wine and cheese.

This stark change in location does allow the series to spread its wings, and as a result its story, a little further, seeing Sawaki caught up in some family turmoil in a French vineyard centred around the beautiful and knowledgeable Marie - a girl who just so happens to look like a blonde version of Yuuki Kei.  For once, Sawaki and his "superpower" allow him to play the hero as this particular arc (and the series) enters its climax - a satisfying moment that actually makes surprisingly good use of the main premise of the show after having seen it used as little more than comedy value and the occasional helping hand for the plot prior to this point.

While the rest of Moyashimon Returns continues to be carried by a strong cast of characters and a sense of fun carefully mixed in with educational portions (although these dry up a little once we reach Paris), there's an indefinable something missing during this major story arc - as soon as we leave the confines of the agricultural college for Paris, some of the show's dynamic is lost, and fun as seeing Paris and France through the lens of this series can be it has neither the punch nor the entertainment value to carry proceedings as proficiently as it has previously.

Luckily this isn't enough to sink the second half of the series entirely - there are still enough bright moments to see it through, and as long as you're emotionally invested in its characters by this point it's hard not to be drawn into what's going on - but it is perhaps its weakest point across both series so far.  If our review of the opening episodes of the series suggested that newcomers to Moyashimon would feel lost in this second season due to the lack of any substantial recap, then this second half of the series is equally unlikely to lure in new viewers on account of its reliance on that empathy with its characters.  If you're familiar with its world however, Moyashimon Returns as a whole is an enjoyable and hugely entertaining journey back to that world, even if it isn't the strongest material the series has had to offer.

7
A protracted major story arc and shift in location don't suit the series all that well, but strong characters and a sense of fun manage to keep things entertaining.
LATEST REVIEWS