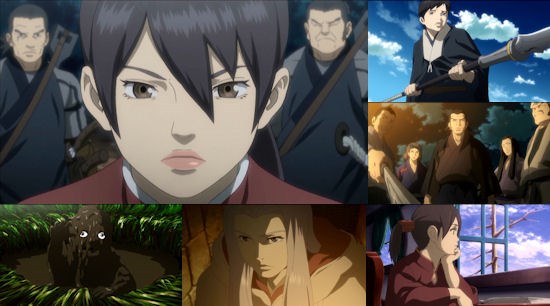 Moribito: Guardian of the Spirit - Part 2

During our review of the first half of Production I.G.'s Moribito: Guardian of the Spirit, we couldn't help noting its refined and almost poised story-telling efforts, punctuated by brief but spectacular bursts of action to help that story on its way.  However, by the time we reached the half-way point of the series there was a notable lull in its pace, so with another thirteen episodes available to these two DVDs which complete the series, can it find its groove once again?

While the immediate danger to crown prince in hiding Chagum seems to have passed by the time this set of discs kicks off, it soon becomes clear that he is far from out of the proverbial woods yet, as it is revealed that death still awaits him on account of the egg of the water spirit which he carries inside of him as its guardian.  As if this wasn't bad enough, while Balsa and company decide what to do about this prophecy without letting Chagum know of the danger he faces, it also becomes clear that star gazer Shuga is on the verge of discovering that Chagum isn't dead as was initially believed after all.  With other goings-on within the country's royal family making Chagum's whereabouts all the more important, we soon find ourselves heading to another face-off between Balsa and the palace's finest, albeit this time with very different stakes.

As the first half of Moribito kept most of its focus largely on the normal, everyday realm of the human, the latter half of the show allows itself much more room to play with the other-worldly realm of the Nayug as it takes centre stage in the story which evolves around Chagum and the spirit which he carries within him - indeed, come the climax to the show these two worlds almost literally collide, adding an extra dimension to proceedings in a number of ways.  When mixed in with the other elements and factions that build up within the series as it progresses, we find ourselves offered a far richer and broader experience than those earlier episodes, but without ever losing sight of the opportunities presented by the story to investigate and build its major characters - something which it does rather well, not only in terms of Chagum's growth but also the growth of those around him, most notably Balsa and Tanda.

Although there's arguably never quite the same sense of peril and danger on show here that the first half of the series exhibited, these later episodes of Moribito still manage to offer a more compelling and fascinating narrative overall - a more complete package, even if any outright moments of action or suspense are few and far between, that gets to the heart of the show's message and characters in a far more satisfying way.  All of this is topped off by the show's wonderful production values, with top-notch animation throughout (give or take the occasional moment of out of place CG) and a soundtrack which accompanies the series perfectly and adds an additional layer of sheen to proceedings.

By its very nature Moribito isn't the kind of anime which will appeal to everyone - It isn't packed with wall to wall violence and action, and it very much plays the long game in terms of building up its plot and characters.  If you're willing to take the time to watch the series and allow it room to grow, then you'll be rewarded with an intelligent and ultimately satisfying watch that achieves its aims without too much fanfare but via a quiet, staid story-telling formula that nonetheless stands the show in good stead.

English 5.1 and Japanese 2.0 audio with English subtitles.  With thirteen episodes crammed into this release, as per part one there's no room for any extras aside from a couple of trailers for other MVM titles.

8
Moribito is neither the fastest nor the most action-packed of series, yet it still manages to weave a quietly fascinating narrative.
LATEST REVIEWS