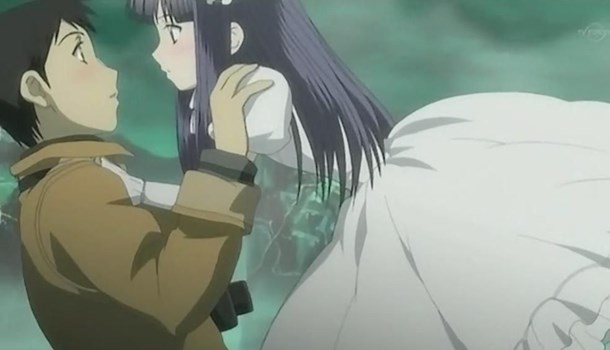 Whether or not you like Moon Phase is going to come down to just how cute you like your anime. Granted, the premise features vampires and evil magic, but this is about as sugar coated as anime-evil can get. If you enjoy the opening sequence, featuring female vampire Hazuki in a series of cute poses, singing the most cringe-inducing (or endearing, depending on your tastes) theme song ever conceived, then you’re in for a treat.

The series begins as a young photographer named Kohei Morioka tours a creepy castle in Germany with his enthusiastic editor and a spiritualist. Upon stumbling over Hazuki, who uses her charms to ensnare him, all manner of supernatural chaos ensues as Hazuki’s guardian attempts to prevent her escaping.

Of course, the fight ends in our heroes favour, but they’ve picked up a passenger in Hazuki, who sees Kohei as an older brother figure, and is constantly frustrated by his apparent invulnerability to her dark magic. By rights Kohei should be her mindless slave, but he’s having none of it!

In fact, that’s where most of the fun lies. This cute little ball of angelic, cat-eared fluff is a kick-ass demon who can’t even control the man who freed her, and the oft-hilarious rants she lapses into are frequently very funny.

As the series progresses, the dynamic of the Mido household is a constant source of delight - especially Kohei's Grandfather, who really does light up every scene he's in.

The series has shades of Tenchi about it - teh first major villain to enter the scene, determined to retrieve Hazuki at all costs, is the very Kagato-esque Count Kinkel. Despite being named like a Sesame Street character, he's actually pretty kick-ass and menacing, and the battles against him are undoubtedly the highlights of the series as a whole - well choreographed, desperate and chilling in places, he adds some very stylish menace to every scene he steals.

However, the series' greatest strength is also a weakness, as the villains that follow the Count are far less menacing, and you never get the same feeling of anticipation from any of the other villains, and subsequently Moon Phase never really climaxes the way you wish it would.

In fact, the end of the series takes a bit of a departure, given that the final arc episode is 24, and the subsequent episodes are simply comedy. It's nice to actually get some "quality time" with characters you've come to care about, and it makes up a little for the lacklustre climax.

If there's anything that makes the series stand out, it's the animation style - colour is used to magnificent effect on Moon Phase, with black and white characters stood on colour backgrounds, or single shades of colour used on each character to enhance a scene. It also has some bizarre ideas when it comes to crowd scenes, with background characters reduces to obvious paper cut outs. This tongue in cheek humour is most readily apparent in the final episode, where boom-microphones enter shot in a style similar to ADV's Pani Poni Dash.

The music is quite adept, cutting from comedic to mysterious seamlessly, and if you can stand the sugary opening, the soundtrack might be worth considering. The US cast do a decent job too, though high pitched female vocals never translate that well from the Japanese original—there are times when Hazuki is irritating, but then it is a part of her character.

Moon Phase should please the casual anime fan. It’s not Shakespeare, but it is an engaging anime comedy with some great characters, great villains and great moments to be found within. Fans of cute should love this, and as a spiritial successor to Tenchi Muyo it does a fine job indeed.