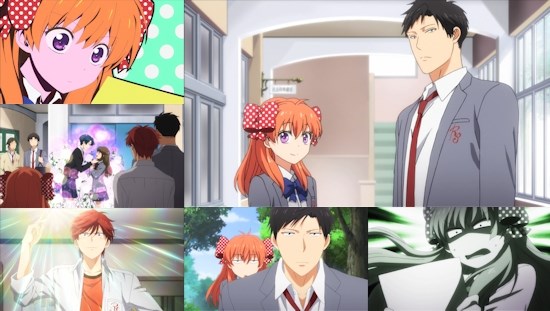 Professing your love to somebody is always a prospect fraught with worry and borderline terror - just how do you express your feelings so as not to sound like a deranged stalker, while simultaneously not making those feelings seem trifling or otherwise insincere? The protagonist of streaming series Monthly Girls' Nozaki-kun thinks she's struck upon the perfect words to deliver her feelings - a simple but effective assertion that she's a "big fan" of the boy in question.

Unfortunately for Chiyo Sakura, the girl in question, she's picked precisely the wrong boy to make such an assertion to, for our titular young man Umetarou Nozaki completely misunderstands the situation - although Chiyo is baffled by her confession leading to her being presented with Nozaki's autograph, the fact that she's then invited to his house seems promising, if a little more forward than she was expecting. Once there, Nozaki is quick to reveal himself... as a professional manga artist on the look-out for an assistant to help with adding screen tone to his works.

As it happens, Sakura is a member of the art club herself and proves to be accomplished at this task, leaving her with saddled with the schadenfreude of working with her beloved Nozaki only to see him remaining impassive and clueless towards her feelings throughout. What's more, just as the pair seem to be hitting it off Sakura is introduced to further members of Nozaki's "staff" as well as some of his inspirations, and inevitably they all turn out to be oddballs; not that Chiyo herself seems out of place in such company, mind you.

Its comedy setup is simple (and not to mention based upon that staple part of the anime comedy diet, the misunderstanding), but there's a real sense of charm to these early episodes of Monthly Girls' Nozaki-kun. This is largely fostered by the show's cast - they all have their particular character tropes which they lean on heavily, but never to the point of becoming one-dimensional, and perhaps more importantly the cast play off of one another wonderfully to operate effectively as a humorous whole. This isn't to say that everything about each episode is laugh out loud hilarious, but it provides enough genuinely funny moments to feel more than worthy of your time each week, and when it isn't making you laugh its characters are lovable enough for you to let any barren patches slide.

The lovable nature of the cast is led perfectly by Sakura herself - she isn't your usual fawning girl in love, but a fully-fledged personality in her own right who is happy to interact with (and even find herself attracted to) other characters or spout inner monologues of despair at Nozaki and friends' irrational behaviour. Of course, her role is largely that of the straight man, always exasperated at the antics of others, but it's one that she fits wonderfully and ensures that she's a perfect cipher for the viewer's own reaction to whatever is occurring on-screen. Her personality and loud reactions are, of course, perfectly offset by Nozaki's deadpan reactions, giving us a strong leading pair of characters that ease us into our introductions to the rest of the cast.

There's also a pleasing variety to the comedy itself - the series is no Bakuman (or The Manga Artist and his Assistants, for that matter), but there is a fun little vein of comedy that comes from Nozaki's efforts to create interesting manga stories (sparkles and all - he is, of course, a shoujo manga artist) even if most of the laughs actually come from events that are incidental to that main thrust of the story. It's hardly a slice of life series, but it isn't a comedy about creating manga either.

Monthly Girls' Nozaki-kun also carries an enjoyable visual aesthetic - the series is crammed with colour, expressive and never shy when it comes to eking further comedy out of character reaction shots and the like. It's a simple yet vibrant look that suits the series down to the ground, and it serves as another important element to the overall appeal of the series. Completing the package is a well-cast set of voice acting performances - Nozaki's deadpan comments fit like a glove, and Sakura also puts in a charming turn to boot.

For all of our praise, we'd be amongst the first to admit that these first three episodes of Monthly Girls' Nozaki-kun don't mark it out as a comedy classic - it's funny, certainly, but not relentlessly so, and at times it only just manages to scrape by with enough laughs to feel worthwhile. That it makes up for those moments with charm and energy is most certainly to its credit, and for our money it's one of the go-to series if you're looking for streaming comedy this summer, but by the same token we can't imagine people talking about the show or recounting its jokes for years to come.

You can currently watch Monthly Girls' Nozaki-kun in streaming form on Crunchyroll.