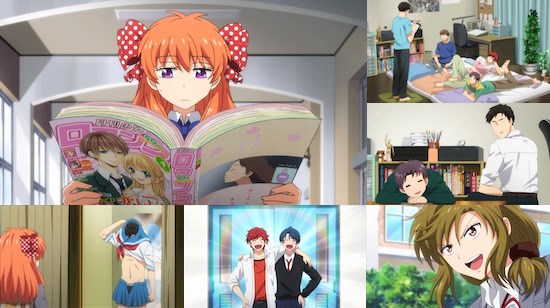 I’m beginning to suspect that UK Anime Network’s Editor-in-chief is trying to trip me up, or at the very least he is testing me (Damn, he's rumbled me - Ed). You see, I keep ending up with his favourite series on my review schedule. Hidamari Sketch was the last of his favourites to fall under my spotlight, and that I awarded that series a whole three marks less than a perfect ten is something I’m not sure he will soon forgive me for. So it is that I find myself having to turn my critical gaze towards another favourite of his: Monthly Girls’ Nozaki-kun.

The series begins with the first of many, many, verbal slip ups. Chiyo Sakura resolves to confess her feelings for the titular Nozaki-kun, Umetarou Nozaki. However, while stumbling over her words she confesses to being his “fan”- a slip of the tongue that instead of being seen as the love confession intended leads to Chiyo receiving Nozaki’s autograph. It is this simple miscommunication which forms the basis of the entire series.

Nozaki then invites an embarrassed Chiyo around to his place, but this seemingly forward move isn’t all that it appears to be. We soon discover that Nozaki is in-fact a well known manga author who specialises in shōjo manga, hence the reaction to his “fan”. His current title is called Let's Fall in Love, and he wishes for Chiyo (a veteran of the school’s Art Club) to help out with “beta” (inking) work.

Slowly but surely we are introduced to the rest of the cast. There’s Mikoto Mikoshiba, the handsome, aloof, popular and flirtatious but shy guy who is easily embarrassed by his own actions. Then we have Chiyo’s friend Yuzuki Seo, the pretty, but psychopathic, basketball player with the voice of an angel. Next up is Yuu Kashima, Mikoshiba’s friend/rival and a “prince” among highschoolers. Then there is Masayuki Hori, the drama club president who is constantly frustrated by Kashima. Finally for the main cast there is Hirotaka Wakamatsu, a basketball player who finds himself haunted by Seo’s on-court antics and whose only comfort is the singing of the Glee Club’s mysterious maestro Lorelei.

The premise then is a simple one and the cast is an assortment of oddballs, each with their own particular foibles. So far so pedestrian, right? Well it is not quite that simple. The set up may be simple, but it is this simplicity which allows the series a freedom to explore the characters without getting bogged down by too much in the way of a heavy overarching plot, and it is this focus on the characters that really shines through the series and enables it’s comedy to blossom.

The characters themselves are a surprisingly well-realised and lovable bunch. The interplay between them has a very natural flow, despite some of their more eccentric quirks. This gives a wonderful ebb and flow to the series which emphasises the best moments, allowing them to really shine and get you laughing out loud, while also enabling you to more easily forgive the less well executed jokes, and this is a series that does have it’s fair share of both. However, the good far outweighs the bad. It is not all plain sailing however - although the lack of any real meaty plot allows the comedy to take centre stage it also means that there is no real emotional payoff to the series; everything is played for laughs and nothing is ever resolved. This is especially frustrating as the lovable nature of the characters will have you rooting for them.

Visually the series won’t win any awards, but its colourful aesthetic suits it to a tee. It also knows just when to adjust it’s aesthetic for emphasis - some of Chiyo’s reaction faces in particular are a highlight. Their simplicity and employment of colourful backdrops really drive home her feelings (usually consternation, as it turns out).

I can see why Monthly Girls’ Nozaki-kun is so beloved by our Editor-in-chief (and others), there is something in every single episode that will have you laughing out loud. However, it is not perfect, and for all the laughs there is the occasional head scratcher. However the series' biggest issue it that it is missing a pay-off at the end, there is no resolution to be found here. Chiyo’s original intent to confess her feelings is left unfulfilled - though that is not through her lack of trying. The relationships between the other characters which develop as the series progresses are left similarly unresolved. This leaves the series as a whole an enjoyable but frustrating experience, though it will certainly leave you wanting more.

8
Funny, punchy and chocked full of interesting characters. The only downside is the lack of any narrative pay-off beyond the laughs.
LATEST REVIEWS