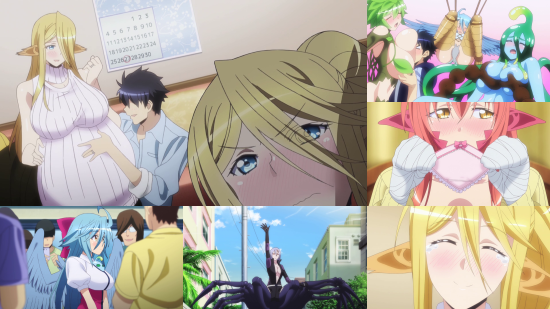 Monster Musume has changed me forever. I never would have thought that the words “lewd snake noises” would enter my vocabulary, but they have now. I also never thought that I would re-join an obsessive fan forum, not after the joys I had with Spice and Wolf, but damn it this series has triggered my full-on obsessiveness again. From where the twitches once came merely from girls who had cat ears and a tail, I have now discovered that the same twitches exist for girls with more "unique" selling points, to put it in a nice way.

Monster Musume, from my previous review, was already a highlight of the season for me primarily due to this new state of obsessiveness. As I was already a fan of the manga, I was interested to see if the series would continue to more-or-less follow in the footsteps of its source material.

It does, and very closely at that. By this stage in the series the first ten chapters are already out of the way, Kimihito’s (it’s weird to actually type his name as he is always Darling-kun in my head…) harem is already getting difficult to keep track of, and from now on it only begins to swell further as Suu, Meroune and Ranchera now come to live in a house that is beginning to burst at the seams.

It does seem to me that everyday life with these particular monster girls isn’t quite that everyday. I am not quite sure how often one would be expected to assist a harpy with an egg laying incident, or how often you would be called upon to help remove built-up toxins from a dryad, or even dealing with death threats? I mean its nice to go out, but when you need to go on almost forced dates with each of your prospective brides, escorted by one of the hulking yet delicate forms of the MON Squad, well, surely you’d be desperate for a chance just to chill with some Netflix before you die of exhaustion! At least he can rely on Ranchera to make him a nice hammock from her web... that is such an awesome talent to have. Just saying.

I do kind of feel for Darling-kun at times, as his hosting doesn’t end with just the six beautiful lasses. If living with a lamia, centaur, harpy, slime, mermaid and an arachne wasn’t bad enough, he now has Lala, the headless harbinger of death, to add to the menagerie. Now don’t get me wrong, the whole, “lets date monster girls” concept has me completely sold. Hell, if there was a contract I’d have to sign, I would be there, tongue out and waiting. But it can’t honestly be that easy living with them? I mean, with Miia being in excess of 5m in length and Cerea literally eating like a horse, it can’t be easy to provide either? I don’t know what Kimihito has for a job - seriously, does he even have  a job, or is being an inter-species foster family to these girls paying out? -- but as it turns out just keeping these seven (well, six as Suu doesn’t technically eat) fed is a mammoth task. Especially when Miia decides to try her hand at cooking... again. Thankfully, and after perhaps the cutest moment of the entire series (Cerea eating heavenly carrots), we do discover that all along the family could claim government benefits to help pay for food.

Monster Musume has the advantage of having strong source material which the producers have relied heavily upon to ensure that the series has strong pacing and follows the same storylines as the manga with some minor changes and adjustments to improve the flow, but as it stands the series finishes at around volume five, just before the manga begins to introduce its fixation on marriage and the parents of Miia, Centorea and Papi. This means that already, and given the pacing of the Japanese manga, there is at least another half a series of material to work from if not more, and giving the kind of fanbase that this series has generated they would be foolish to not have more, wouldn’t they? As of writing, alas, these twelve episode of monster girl shenanigans are all we get.

One thing to also be aware of if you are getting as twitchy as I am about the lack of monster girls in the coming winter is the existence of web shorts on the NicoNico video service. Not locked to Japan, these twelve 3-4 minute episodes actually focus more on the everyday aspect of the lives of the monster girls, with scenes like “how Papi wakes up in the morning” to “how Mero sleeps” it really adds a new dimension and, to put it mildly, makes you cry with laughter at times. I recommend checking these out.

Monster Musume has been one of the highlights of my year. During some cold, wet, snowy weather, this series gave me a warming glow as well as the urge to learn how to ride a horse.

(Oh, and the best girl is still Centorea…)

You can currently watch Monster Musume in streaming form on Crunchyroll.

9
Monster Musume delivers smiles as wide as Miia is long.