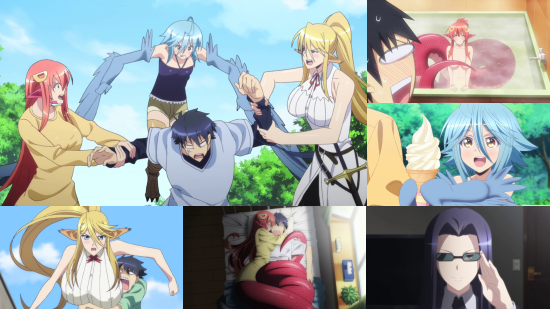 I have been waiting for this moment ever since I first discovered the allure of cat ears and other animal appendages - monster girls, in all their forms, are in fashion at the moment. When I last visited Japan in 2013, Monster Musume was two volumes in, and all around the stores were posters advertising volume three, with Miaa, Centorea and Papi featuring highly on the posters in poses that would make you look twice and drool. At the time votes were being held for what kind of monster the next girl would be (wait for episode five of the anime to find out who won!) - since then, the manga has been released in English and has drawn yet more unsuspecting people to the dark side thanks to its awesome character designs, slapstick and the ongoing, and quite frankly hilarious, storyline. There was a reason why the manga won in our 2014 awards ceremony.

Since then, the manga has been adapted into this new animated series, but the question is, does the anime still retain the scales of the original, or does it leave us feeling a little horse?

I think it’s best to start at the beginning. Imagine, if you will, that monsters were real all along. The folktales told about creatures in the night? All of them were real, and the fact that no one saw them anymore was all just a big government conspiracy. So when monsters are rediscovered, a process of reconciliation begins with an interspecies exchange programme where the monsters discover human culture by living with human families. This is all dictated by a legislative act, the Interspecies Exchange Act, which sets some ground rules. Firstly, no human may harm a monster, and vice versa. Secondly, no monster may go out without their host family members. Lastly, and probably the most difficult, no sexual relations may take place between the members of the host family, and the monsters in their care.

Now, when I use the word “monster” what I actually mean are monster girls, and exclusively girls. In fact, no non-female monster is ever seen, although thanks to the Monster Encyclopaedia we know for a fact that they do exist. To be honest, I think that the word "monster" is too harsh a word to describe these beautiful gals, they are simply normal girls with, ahem, "bonus features".

The series revolves around a chap called Kurusu. He has a job, a normal life, and he is also the acting host family for a lamia (snake woman) called Miia who was thrust upon him by the monster exchange co-ordinator, the sadistic Ms Smith. Miia is a nice enough girl - aside from being cold blooded and almost seven metres in length, Miia just loves to hug and squeeze Kurusu, referred to by her as Darling-kun, for his body warmth. The dislocated shoulders and suffocation is just an act of appreciation to Darling-kun for his feelings for her and his exothermic emissions. To her, Darling is the first person who saw her as an actual girl, rather than a snake. Unfortunately for Miia, Darling-kun has the ability to care for many others, and is a magnet for monster girls...

Enter stage left, at a brisk 20mph, the extremely buxom Centorea. Half-woman, half-horse, half knight-of-the-round-table that just happens to believe the manga stereotype that if you run into someone at an intersection, they are destined to be the one for you. Unfortunately for Centorea, in Darling’s case it isn’t so much the concussion that brings them together - no, its more like the use of her elongated bottom half to chase down a criminal that does the trick. In some cultures it’s also traditional to ask the woman before you ride her...

Enter, stage up, the third of our candidates. She is small, she is feisty, she has a bird brain and to her, kindness is endless, almost as endless as her ability to repeatedly drop Darling-kun. Enter Papi, the harpy. With wings for arms, and only small claws to actually allow her to grasp things, it’s the simple things that make life great; things like having a bath in a public fountain or eating ice cream. Papi may look childish, though, but she is no child.

Kurusu becomes the host family to these three troublesome girls as, one-by-one, they fall for him through their encounters, and although most of the girls are aware of their situation (Papi perhaps being the exception), it doesn’t take long for the tension to ramp up thanks to the power of close quarters, regular trips and falls, and more concussions and broken limbs for poor Mr Darling-kun.

As expected from a harem show, the acquisition of beautiful women of various species does not stop with just the snake, the horse and the bird. Other mythical creatures, from the finned to the webbed to the gelatinous, appear to ensure that Darling-kun never sleeps soundly again. We should all be so lucky.

If it wasn’t massively obvious, Monster Musume is another prime example of the harem genre, with some differences compared to other examples. Firstly, the series has an incredible attention to detail when it comes to the girls - after all, it takes a special kind of mind to develop sticky-back panties for use with lamias. Secondly, the series doesn’t feature pre-pubescent girls, which always a bonus in my book. Lastly, and most importantly, it’s actually incredibly sweet. Beyond the occasional slapstick situations and the romantic comedy, each of the girls’ characters come to light, from Papi and her rescuing of the girl in the tree, Centorea’s attacking of a bag thief, and even Suu who manages to rescue someone in danger on a road. The series manages to convey, quite successfully, the one truth - that even though these girls are of various species and are very different to humans, they are still girls and should be treated as such.

The anime has so far followed the manga very closely, and up to the end of episode four we are roughly at the end of volume two of the manga (admittedly, this is from memory, due to having been forced to ship home my manga to the UK some months ago). Of particular note is the selection of voice actors. I am not sure exactly how the auditions had taken place, but the casting for the series is excellent. So far the actresses have the characters’ nuances perfectly. Of particular note is Natsuki Aikawa who plays Centorea and manages to get the rather archaic and embarrassed tone of the character perfectly. I may be in love.

In answer to my own question then, Monster Musume the anime is as good as, if not better, than the manga that preceded it. Taking an award winning source, the series breathes new life into the characters thanks to the acting and animation. The producers have taken the manga and added in new scenes that only add to the cuteness. It’s safe to say that I have had a grin on my face since the first episode, and I can only hope that this grin remains.

And as for best girl, it's totally Centorea...

You can currently watch Monster Musume in streaming form on Crunchyroll.

9
It’s hard to improve on this award-winning manga, but the producers managed it.
COMMENT AND DISCUSS
blog comments powered by Disqus