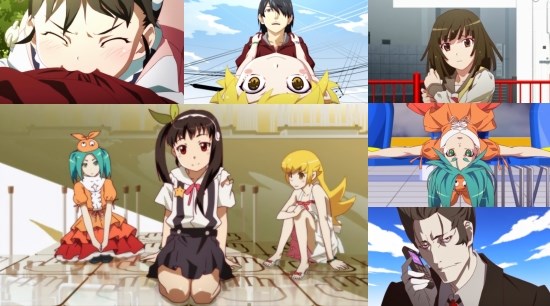 Now that both Bakemonogatari and Nisemonogatari have been released in full here in the UK, it seems like a perfect opportunity to return to the remainder of the show's second series proper - after a slightly slow start its first story arc ultimately brought us not only plenty of what this franchise does best but also an affecting and tear-jerking finale, hopefully setting the tone for things to come from the remainder of Second Season.

Having re-joined Tsubasa Hanekawa for that first story arc, it's to Mayoi Hachikuji that we look for Second Season's second story - not that Hachikuji herself features all that prominently, as this tale instead focus upon Koyomi and Shinobu as they seek to use the latter's powers to travel back in time and stop Hachikuji's fate from befalling her. Of course, as we well know, trying to meddle with key events in the past is a fool's errand, causing some major issues that reverberate far beyond Koyomi and his friends. If you're mourning the fact that Hachikuji doesn't feature prominently however, fear not - she has a major part to play in another of this series' story arcs, although you should prepare yourself for a twist that is a punch to the gut that will leave you in tears.

Elsewhere, much of the rest of Second Season revolves around Nadeko Sengoku, although again at least part of her story is used as a means to an end with regards to delving deeper into some of the show's other characters. While her encounter with a supposed snake god is the catalyst for major events which ultimately take us through to the end of this series, the events themselves shift from Sengoku herself to the fraudster Kaiki and his relationship with Senjougahara.

Perhaps more so than either Bakemonogatari or Nisemonogatari, Monogatari Second Season is about the characters as much, if not more, than it is about the events, and it's this fact that is perhaps the jewel in the show's crown. Although there are some fascinating and occasionally emotional moments sprinkled alongside the show's trademark humour (which varies from the hilarious to the slightly uncomfortable), it's really the opportunity to get further under the skin of some of the cast that makes watching this series a really joy. From a predictable villain in Nisemonogatari, Kaiki in particular is fleshed out wonderfully - never mind the superb musical accompaniment which sits behind his appearances, the final arc of the series lets him take over as narrator to reveal an engaging and surprisingly complex character. The same can also be said of Senjougahara, who is also revealed to have more dimensions to her persona, and Sengoku's character is also explained in a terrific fashion that ties nicely into her story here.

This isn't to say that Monogatari's story-telling is a slouch - as we've already noted, one story arc builds up smartly to a devastating finale, and all of the others prove capable at spinning a yarn. Indeed, only Kabukimonogatari really falls flat by trying to deliver a more grandiose narrative that simply doesn't work, suggesting that Nisio Isin is best served sticking to his more tight-knit and personal brand of story-telling. Even by Monogatari's verbose standards, Second Season is a cavalcade of talking heads, made bearable only by production studio SHAFT's ability to bring colour and life to even its static shocks with some eye-catching tricks and decisions. It doesn't have quite the same impact as it did in Bakemonogatari now that we've effectively seen it all before, but its ability to carry along what would otherwise be mundane moments shouldn't be underestimated.

The one area where this series again threatens to go off the rails is with some of its humour - there are no tooth brushing scenes to be found here, but on occasion the show veers into risqué territory with no real pay-off; a strange blend of fan service and comedy where the latter is clearly commenting wryly on the former but while still fully leveraging the popularity of such material. I'm not sure if that makes it genius or exploitative (it's a great example of trying to have your cake and eat it), but there you have it - thankfully it never intrudes overly on the more positive aspects of the series, but if you're particularly sensitive to such things it could be off-putting.

Although its reliant on your interest in characters and past events more than even your typical second season, that shouldn't deflect what Monogatari Second Season accomplishes - a series of character-driven stories that are entertaining, funny and, when required, touching or even heart-rending in places. That it can deliver such a rollercoaster tour de force is almost enough for us to argue that it surpasses Bakemonogatari, although it does perhaps lose something without the feeling of freshness that made that series so engaging - either way, however you want to spin any argument over the relative quality of the two series it's still great company to keep, and Second Season is a superb addition to the Monogatari franchise that any fan of its past iterations should make time to watch. If nothing else, you'll want to see Nadeko flipping her lid...

9
One weaker story arc aside, this series is a tour de force of character-driven humour, emotion and story-telling. A must-watch for fans of the franchise.
LATEST REVIEWS