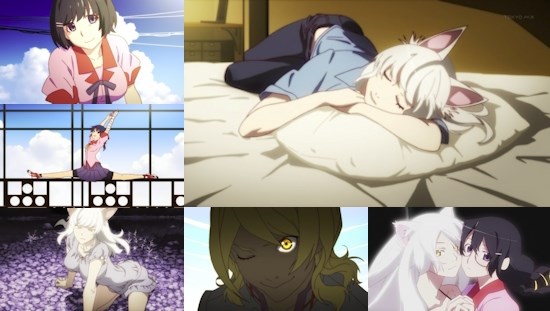 The so-called Monogatari series has proved to be one of the megahits of anime in recent years - Bakemonogatari (now reaching the UK on DVD and Blu-Ray from MVM Entertainment) took production studio SHAFT into the big league, its follow-up Nisemonogatari didn't garner the same kind of critical reception but still sold like hot cakes, and Nekomonogatari: Black brought this series of Nisio Isin light novel adaptations back to the forefront of people's minds right in time for this second series proper. Thanks to new streaming service Daisuki, all of these series are available (or soon will be) for free in the UK, but how does this tent pole of the summer season fare?

Having already enjoyed two major story arcs as their focal point already, you might be surprised to hear that Tsubasa Hanekawa is again the leading lady for the first five episode arc which makes up Monogatari Second Season, before leading into a sixth episode that recounts the Nekomonogatari: Black OVA. What might surprise you even more is that for the vast majority of this arc protagonist Koyomi Araragi is notable by his absence, for reasons not-yet explained but teased as a focus for a future story.

With no sign of this part-human, part-vampire everyday hero, Hanekawa is left a little stumped when she meets a white tiger in the middle of nowhere - a white tiger that doesn't seem to have too much time for her, for that matter. As events threaten to spiral out of control around Hanekawa's life, bringing with it the introduction of her familiar stress relieving alter-ego known as "Black Hanekawa", it's up to her and friend-cum-love-rival Hitagi Senjougahara to get the bottom of this whole tiger incident and why this particular oddity has appeared before her.

The first point I have to make about this series is not to even consider going into it cold - unless you've watched at least Bakemonogatari, and preferably the rest of the Monogatari oeuvre to date, there's no way you'll be able to get up to speed with this show's colourful cast of major and supporting characters. With such a reliance on the strength of these individuals and their personalities, that lack of prior knowledge will drain a lot of the entertainment value and leave you wondering what all the fuss about this collection of talking heads is.

Assuming you are au fait with the franchise then, the good news here is that the disappointment of Nisemonogatari is entirely flushed away here - this opening arc of Monogatari Second Season makes superb use of its cast that is actually accentuated rather than compromised by leaving Araragi on the side-lines, to the point where we wonder whether the entire series might do just fine without him for a while. Then again, such thoughts are brushed aside by the frankly beautiful ending to this arc, which underlines Hanekawa's character superbly (in terms of both underlining to highlight and drawing a line under her behaviour to date) in some genuinely tear-jerking final scenes that left me with a lump in my throat. It's hard to argue as to whether this is the best story arc Monogatari has delivered so far given the company that it keeps, but personally speaking I'd be hard-pressed to rate any of its other storylines higher.

Given who many column inches have been dedicated to Bakemonogatari and Nisemonogatari's aesthetic (not least on this web site), it's telling that somehow SHAFT have managed to up their game here once again to produce visuals that remain as quirky, fun-loving and eye-catching as ever but with an extra sheen afforded the studio's expanded budget. In particular, the animation for one particular scene early in episode five is possibly one the most wonderful and charming things I've ever seen within a mainstream TV anime series, proving that this kind of style actually serves in aiding story-telling as well as just looking damned pretty.

Although Daisuki's streaming service has improved since its formative days, I have to admit that I still find myself wishing I could watch this series on a superior streaming platform - although not flawless, Crunchyroll's streams still look better and more often than not prove to be more versatile in terms of handling subtitles; a particularly big deal in the case of this series as it throws out on-screen text with gay abandon. If you're willing to wait an entire month to see each episode then Crunchyroll is a potential viewing option for the series, but if you want to watch a true simulcast then you'll have to deal with Daisuki's foibles. Still, that isn't to say that there are really any issues with Daisuki's presentation, it's still eminently watchable so I can't complain too heavily about it.

As a fan of Bakemonogatari who was largely disappointed with Nisemonogatari, this return to form in Monogatari Second Season thus far is a real treat, like a chance to catch up with good friends who you haven't really seen in a while. Any worries I had about the possibility that the best of this series have been and gone have been utterly disproved, and the return of Senjougahara, Hanekawa et al has been an entertaining, suitably fascinating and occasionally touching one. As we've mentioned, this isn't a series for newcomers to dip into, but anyone with sufficient prior knowledge and enjoyment of this franchise should definitely make sure they don't miss this.

9
Scintillating visuals and excellent story-telling to make full use of a strong cast of characters; these episodes showcase everything that makes the Monogatari series so popular.
LATEST REVIEWS