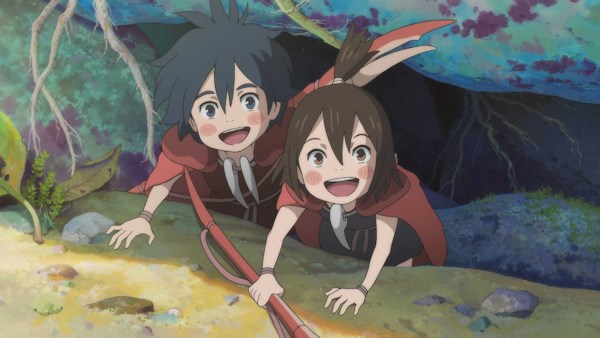 At 53 minutes, every little film is a bite-sized piece of superior animation that ranges from the magical Kanini & Kaanino, the tale of two water sprites coming of age, to egg allergies in Life Ain't Gonna Lose, and a socially invisible man in the aptly titled Invisible. Lets take them one at a time.

Kanini & Kanino features some beautiful fusions of water and animation to create a realistic but fantastical environment for a family of water sprites (who have cute little sticks with crab claws on the end of them for tools/weapons). With their mother departing to give birth on the surface, the brother and sister are left with their father - upon being separated, the pair must work to survive in a harsh environment. It's a stunning looking tale, and probably my favourite of the the three, especially since it gets by with no dialogue (just the names called out at times). This makes it incredibly accessible and easy to enjoy.

Life Ain't Gonna Lose deals with food allergies, and in particular the egg allergy of a young boy. The slowest of the three, and easily the most grounded, it highlights the dangers of everyday life for someone unusually affected by what many would consider mundane. Like the short before it, animation is top notch, featuring simple designs, smooth animation and seamless computer generated imagery to make scenes pop. The medium has come a long way.

Invisible is the real odd duck though. The tale of an invisible man ignored by everyone around him, who is so light he has to carry a fire extinguisher around just to keep him grounded. It's very sad and melancholy, but features some lovely sequences and a rather heartfelt, if sudden, conclusion. It's the most stylish and thought provoking of the three, and probably the one that will linger longest.

Taken together, this is a wonderful and varied set of adventures unified by the titular theme, and pretty much the perfect length to maintain interest. For students of animation in particular, the ideas and techniques represented here will be both refreshing and inspiring. It's really too good to miss, especially if you're already on the Netflix platform.

9
3 charming tales to make you feel good from an up and coming studio at the top of its game. Pure Magic.