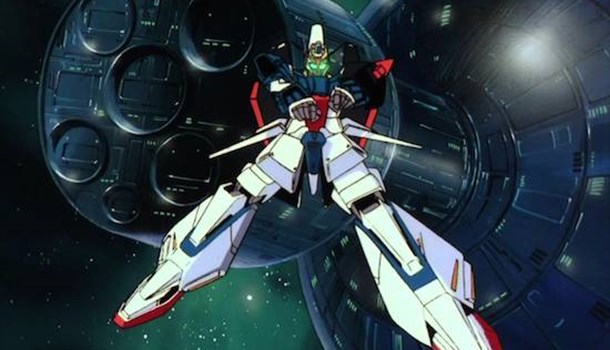 Returning to Double Zeta for this second set of episodes, things continue in much the same manner as the first, namely a marked shift away from the lengthy ‘epic’ quality of prior Gundam shows toward a more lighthearted ‘adventure of the week’ format. Easily accessible from the off, with most storylines concluding within just one or two episodes, Double Zeta remains as brazenly bombastic and hot-tempered as the decade that spawned it.

Protagonist Judau is every bit the 80s man-of-action here; a fiery motor-mouthed hothead, quick to jump in to situations beyond his abilities - quite apart from the melancholic, brooding introverts we’re used to in the Gundam franchise. This liveliness keeps things moving at a decent clip, and again ensures this set of episodes is easy to step right back into, as we follow his continuing exploits resisting the forces of Neo Zeon.

Expect bold primary colours and an extravagantly expensive-looking 80s aesthetic from the off - this is old-skool cell animation at its finest (at least as far as TV budgets of the time went). What’s even more impressive is the manner in which the show’s animation itself also gets increasingly ambitious, with a rubbery looseness at odds with the usual staid, robotic quality that often affects classic 80s shows. Facial expressions feel more human, the mecha battles more dynamic - and in general there’s a litheness to the movement and editing. This marks the show out as a kind of progressive missing link toward the kinds of animation techniques that are second nature these days.

Double Zeta had something of a bad wrap at the time, but re-watching now it’s remarkable to see how many traits play out as forerunners to the kind of material that’s become anime’s bread and butter in the 90s. In particular, the wacky comedy and harem-esque feel, that begins to emerge amongst its constantly bickering cast of youthful nobodies, is a wonderfully lighthearted counterpoint to the more serious tone of the mobile suit battles. In this respect, Double Zeta feels refreshingly ahead of its time.

The presence of some dreamlike, painterly background art really helps play up the ‘global’ feel of the show here too - the first episode of this set dazzles with the burnt oranges of desert vistas, while the next shows us extravagant parades in a bustling urban metropolis. The show also increasingly offers up ‘beauty shots’ - detailed close-ups of characters’ faces in key dramatic moments, punctuating the action with instants of real impact. In moments like these, with the series bolstered by a cast of more morally grey antagonists - we lose sight of who are really the good guys and who are the bad. It’s a classic gundam theme, but one that’s played especially well here in the more condensed episodic format.

Shaking off to some degree the baggage and heavy politicking of the original Zeta series, this show goes above and beyond its Saturday morning kids TV feel to offer flashes of the deeper thematic depth that’d make successor gundam efforts like Gundam Wing such a success in the West. Gundam has always been about war. But here, perhaps more than ever, it also feels like a series deeply involved with the lives of those who live through war. Concerned with the everyman as much as it is high-powered generals and commanders. Double Zeta feels like it examines the possibilities of the Gundam universe with new eyes, exploring new angles and avenues in its efforts to make us care about the show’s ensemble cast.

There’s a beautiful, surprisingly moving outlook of possibility to the series - a sense that no matter where you might end up in the world, people from all creeds and cultures hold the same core human values close to their hearts; with our plucky protagonists lending an almost childlike innocence to the way we might understand those values in the context of wartorn times. In this sense, Double Zeta remains excitingly current in its themes, and eminently more accessible than many other entries in the Gundam franchise. That very same childlike tone might rub the wrong way at times, but it more than makes up for it in terms of sheer joie de vivre.

Extras include clean opening and closing credits, as well as a 48-page collector’s artbook.