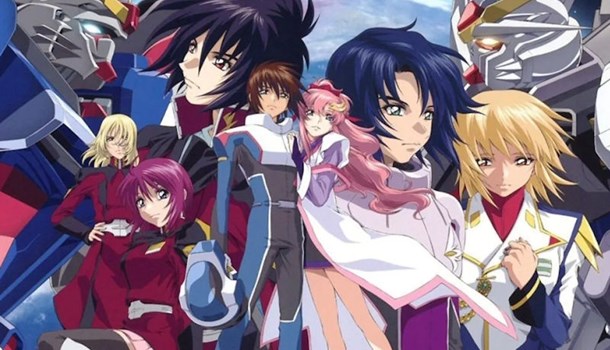 It is Cosmic Era 73, three years after the Bloody Valentine War, where conflict is about to engulf Earth and its space colonies once more as factions within ZAFT and the Earth Alliance break the uneasy truce established at the end of Gundam SEED.

“Le sigh”. You know, I was really hoping to be able to use this review in part to offer a counterpoint to Ross’ review last year of the Gundam SEED Ultimate Edition, which I felt was a tad harsh, even if I could understand his disappointment. Because honestly if you compare the SEED and SEED Destiny sets to prior Ultimate Editions (I’m especially thinking Full Metal Alchemist, Cowboy Bebop, Eureka 7 and Escaflowne) that Anime Limited have put out, then these two packages do pale somewhat, with an asking price that is wince-worthy. And it hurts to say that as the SEED universe has arguably my favourite aesthetic for the overall suit designs, and just taking Destiny as our example, this IS a pretty well-packed set. Unfortunately it just so happens that Destiny is one of the messiest Gundam shows out there, with some truly bone-headed character motivations and a resurrection that, whilst not unwelcome, forced some incredibly creative re-edits in the final few episodes of Gundam SEED to make it make sense, so sadly my final review has to reflect the content of the show itself and not just my estimation of the value for money offered by the package.

So what do you get for your money? Let’s break it down:

Not a bad selection right? Much like with the SEED collection it’s appreciated having the original release of the series included, along with the OG dub. Likewise the compilation films do a lot to condense the Destiny story and helps mitigate some of the worse tendencies of the show to recycle particular shots & sequences. The Stargazer OVAs are a nice addition and the sort of thing I’d like to see more of in these sorts of sets. And if you measure the contents of this set against Anime Limited’s own pricing of their various Gundam releases, you are looking at £59.99 RRP for 25 episodes of most series. Consider that this package gives you 103 episodes and 4 movies for that £199.99 RRP, it doesn’t seem quite so bad. It just so happens that you are buying 3 versions of the same show, which arguably is the point of an Ultimate Edition to give you the full experience of a show, and you can’t say that Anime Limited haven't provided that. Whether you are willing to pay the asking price for that? Well that’s a question you have to ask yourself. Personally I brought it at the pre-order Early Bird rate of £129.99 which I’m fairly happy about to have completed my Cosmic Era collection. On their website Anime Limited have it discounted to £149.99, which I’d consider a tad steep but worth consideration.

So, a flawed release? Undoubtedly. And not something I’d recommend to someone with limited prior exposure to the Gundam franchise. But as a complete package for the SEED fan? I mean it is about as comprehensive a set of SEED Destiny content as you are likely to be able to get....

5
A solid if uninspiring collection, very much for the completionist. Anime Limited can (and have) done other Ultimate Collections better.