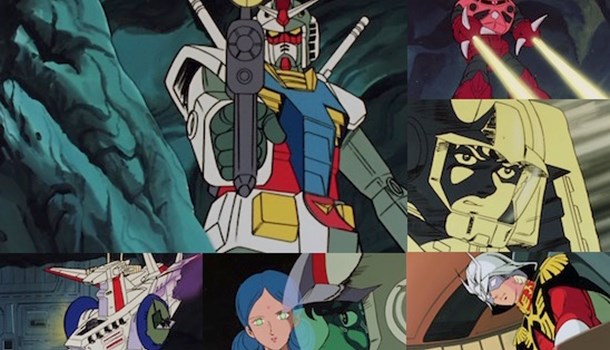 When we last visited the year 0079 of the Universal Century, the crew of the White Base had settled quite comfortably into their new roles as part of the Earth Federation Army, striking numerous victories against the Principality of Zeon with Amuro Ray and the Gundam. Comprised of the final 21 episodes of the series, the second part of Mobile Suit Gundam takes things to new heights as we witness some of the landmark battles of the One Year War, before the White Base blasts off from Earth once more to join the final assault against Zeon. Standing in their way once more is Char Aznable, determined to end his rivalry with Amuro as well as take his own revenge on Zeon’s own leaders – the Zabi family.

Though it would perhaps be unfair to say that the first half of Mobile Suit Gundam was small in scale, the fact that it primarily focused on the White Base as a sort of lone operative did make it feel somewhat detached from this great war that was ravaging space at the same time. Now that the audience has fully got to grips with its setting, the series expands the scale of the conflict significantly with much larger battlefields and a whole lot more at stake. The robot fighting action is superb, with Zeon deploying a wide variety of memorable mobile suits and armours to take down the seemingly unstoppable Gundam.

Although the majority of the amped-up death toll is taken by nameless soldiers on both sides, that isn’t to say Gundam has lost the sympathetic side displayed in the first half of the series. The great devotion to character conflict and drama is still very much present, and even extends to several of the more forgettable White Base crew in their own character-defining side stories. Char’s grand return to the forefront of the story is extremely welcome, proving his worth as one of the most endearing characters the franchise has ever produced (it’s no secret that almost every Gundam series that’s followed has featured some sort of imitation) as well as developing Amuro, White Base crew member Sayla Mass and newcomer Lalah in interesting ways. The show even manages to make you look at the Zabi family - some of the only characters that ever feel wholly like bad guys - in a different light.

However, analysing Mobile Suit Gundam’s main flaw also requires a little bit of a history lesson. Back before Bandai got involved and helped transform Gundam into the hugely successful franchise it is today, the original series struggled with popularity and was even on the verge of cancellation. Its sponsors wanted to cut the 51 episode count down to 39; however Tomino and company managed to persuade them to bring that up to a final count of 43 (these numbers include the “lost” episode mentioned in the previous review, so 42 internationally released episodes in total). The loss of these final seven episodes clearly had an impact on planning and story structure for the series as a whole, with it no longer able to properly devote time to the various plot threads previously set up.

The biggest offender here is Lalah’s arrival, which brings along the concept of ‘Newtypes’ – a supposed “next level” of human evolution that Amuro has reached. With Gundam previously having taken a pretty realistic approach to things this more fantastical element feels like a pretty big development. Not necessarily a bad one, but certainly one that could have done without being suddenly dropped into the last handful of episodes. Elsewhere Char’s origins and his relationship with Sayla is set up to be one of biggest focal points of this half-season, but its context is barely covered at all – with the entire basis of Char’s motivation told in a few sentences and one thirty second flashback. Of course all of these issues have gone on to be properly addressed in later instalments of the franchise (Char most recently in the excellent Gundam: The Origin OVAs), but looking at this series as a single product they simply aren’t done the justice they deserve. Thankfully it isn’t enough to completely throw the series at the final hurdle or spoil the quality of what came before it, but it is a sad reminder that as a standalone the series still could have been so much more.

As a final note – if you’re watching Mobile Suit Gundam for the first time without any prior knowledge of the franchise's main timeline DO NOT watch the “next episode” previews! For some this might be standard procedure, but these are possible the best (or worst) examples of spoiler-filled previews out there. They have absolutely no regard for suspense, blurting out almost every big character moment or death in the first line of the narration.

In terms of picture quality there’s little to say here that wasn’t previously mentioned in our review of part one of the series – the Blu-ray restoration looks great, but there is only so much you can do with a series that aired in 1979. There are plenty of recycled sequences and wonky cells, but on the whole it still manages to look pretty great for a show that was obviously struggling at some stages.

If you’ve ever watched a real-robot series that was released after 1980, chances are it was inspired by Mobile Suit Gundam. It didn’t just invent this subgenre of mecha anime, the influence of its great characters and storytelling continues to define it over 35 years later. Even with its troubles it remains both hugely enjoyable and a must-see show for any self-respecting mecha fan.

8
Even production woes can’t stop Gundam from claiming its place as an all-time classic.