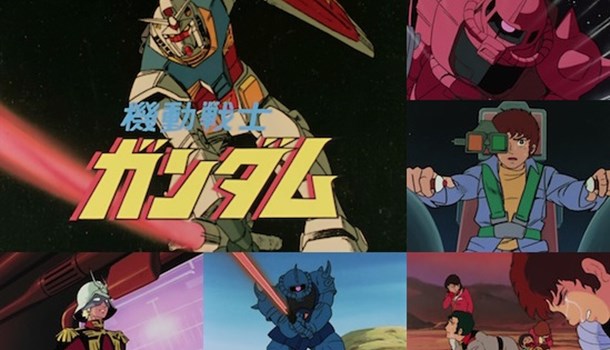 Gundam is a word that is synonymous with anime. Not just content with being the biggest mecha (or maybe even anime in general) franchises in the world, it’s also something of an institution - spawning numerous sequels and spinoffs, video games, life-size statues and of course an endless supply of model kits. Yet despite its popularity, the original iteration of the franchise - Mobile Suit Gundam (also known as ‘Gundam 0079’ and ‘First Gundam’ to fans) - has never previously made it to the UK. However, thanks to Anime Limited and a venture from Sunrise to bring more Gundam to home video in the West (which is all the more important since Bandai Entertainment’s closure a few years back) that is all about to change.

It’s the year 2079 (or 0079 of the Universal Century) and humanity has reached out to the stars, building a number of huge space colonies orbiting the Earth. One of the colonies has declared independence from the Earth Federation, renaming itself the Principality of Zeon and beginning a conflict now known as the One Year War. In this short time, over half of humanity has perished due to the fighting.

When the warship White Base arrives at the colony Side 7 to pick up the Earth Federation’s latest Mobile Suit weapon, a Zeon attack wipes out most of its crew as well as many innocent civilians. In retaliation, teenage civilian Amuro Ray pilots the new weapon - the Gundam - into battle as the White Base scrambles to put together a civilian crew and rescue as many refugees as possible. As the White Base sets out on a return journey to Earth, Amuro becomes the Gundam’s official pilot as they repeatedly cross paths with Zeon forces.

Mobile Suit Gundam may be the pioneer in military-grade "real robot" anime, but the mecha action (albeit excellent) isn’t where the show’s true excellence lies. It’s brilliance is in fact with its characters, painting both sides of the conflict in a well-developed manner without ever making it seem like a simple case of ‘right and wrong’ or ‘good versus evil’. Each side has those who are taking advantage of the situation, those who believe in their cause and those simply fighting to stay alive. It shows the horrors of war on both sides - from the mass death of innocent civilians in the very first episode to betrayal and condemnation from your own supposed comrades. The early episodes are also very quick to set up plot points that will be developed later, such as the relationship between Zeon commander Char Aznable and White Base crew member Sayla Mass which is currently being further expanded upon in Mobile Suit Gundam: The Origin.

The individual cast members are similarly varied. Amuro may be the show’s main protagonist, but he’s also rash and sometimes incredibly immature with his actions which often makes him difficult to root for in the conventional sense. Similarly, Bright Noa and the rest of the White Base crew always have the best intentions, but their inexperience often leads to disagreement and in-fighting. Meanwhile, on the Zeon side of things Char proves himself to be a suave and incredibly likeable antagonist (although perhaps ‘rival’ is a more fitting descriptor) and Lieutenant Ramba Ral shows a caring for his troops that you wouldn’t expect to see from a side that could be considered the enemy. Moments like these make Gundam feel less about the overall conflict and more the human drama and character development it creates. It also succeeds in making deaths on both sides all the more gut-wrenching.

However, the robots are arguably the main part of what has made Gundam so long-lasting as a franchise, so naturally this an area the show doesn’t slouch in either. Given that Mobile Suit Gundam was a break away from the super robot anime that dominated the 70s it seems ironic that the mecha actually shares quite a bit in common with them. There’s no shouting of attack names, but the bright colour scheme, combining sequence and general “better than the rest” nature of the Gundam certainly fit right in. The Gundam itself may be a timeless classic, but the same also applies to the more demonic mono-eyed Zeon suits such as the Zaku and Gouf. With designs this good, it’s no surprise that future instalments have always constantly looked back on the originals in some way for inspiration.

Of course, with the series now pushing 36 years old there are some areas where Mobile Suit Gundam is beginning to show its age. The restoration process for this Blu-ray release may have the show looking sharper than ever before, but it sadly can’t take away the numerous quirks and animation errors productions from this time period usually suffer from. Issues like stock sequences and the Gundam constantly changing scale are the kind of thing old-school anime fans (particularly mecha fans) will find quite easy to overlook, but for those not so familiar with such relics might have more difficulty with them.

A few other quirks worth mentioning about this release is that it is missing episode 15 of the series, which creator Yoshyuki Tomino claims was “not up to the usual animation standards”. At Tomino’s request it was never dubbed or made available in the West, becoming a “lost” episode of sorts despite being made available on Japanese releases of the show. While the fact it was omitted from this release is likely to upset some fans and consider it incomplete, it should be stressed it has no bearing on the overall story whatsoever. Also included is the English dub track, which was produced in 2001 as Bandai Entertainment attempted to capitalise on the success they had with Gundam Wing - the show that served as many Westerners’ introduction to the franchise. Since this is the first time it is officially coming to the UK this will likely be the first time many have heard it, but despite this there is an odd feel of nostalgia about the whole thing. Maybe it’s just the casting of Brad Swaile (Quatre in Wing, as well as Light in Death Note) as Amuro that creates it, but it’s a good quality dub nonetheless.

There may be a few minor issues here and there, but Mobile Suit Gundam proves to be just as relevant now as it was back in 1979. Though in fact the show wasn’t actually all that popular during its initial run (leading to its premature cancellation), it isn’t hard to see how it still managed to become the icon it is in both otaku culture and Japan as a whole. Many have tried to replicate the war-torn coming of age story Gundam created, but few have ever come close to equalling it.

English and Japanese stereo audio with English subtitles.  Extras consist of text-free opening and closing animations along with Japanese DVD and Blu-ray commercials.

9
Though getting on a bit in the looks department, the show that started so much still remains essential viewing.