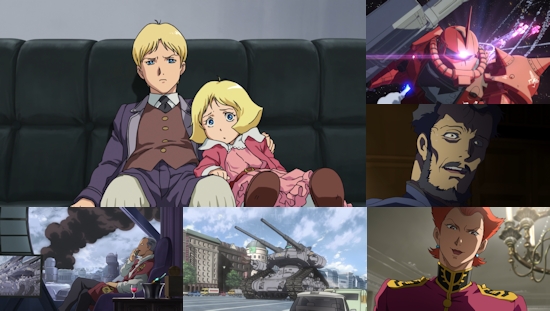 No matter your age or interests within anime fandom, you'd have to try pretty hard to be completely unaware of Sunrise's behemoth franchise Mobile Suit Gundam; a brand that has proved to be enduringly popular since its debut in 1979 for all of its ups and downs, successes and failures. With such a vast number of series chronicling this universe across the intervening 35 years however, the world of Gundam is an intimidating one for a newcomer - where do you even begin with the wealth of content produced in its name?

This is a question that I've personally struggled with for some time - it's been hard to find a motivation to go back to the beginning and the original Mobile Suit Gundam, an abortive attempt to watch Gundam Unicorn made me painfully aware that finding the right entry point to the franchise is key, and Reconguista in G... well, the less said about that the better. However, help may now be at hand with the advent of Mobile Suit Gundam: The Origin, an animated adaptation of a manga penned by the original show's character designer that effectively seeks to retell the tale of Mobile Suit Gundam. The first episode of this OVA is now available digitally, with a premium edition Blu-ray release available for pre-order in the UK, so is this first instalment capable of taking me to a promised land where I actually get to learn about and understand the Mobile Suit Gundam universe?

This opening gambit begins with a glance at where the series is ultimately heading - UC 0079 (UC standing for "Universal Century", incidentally), and a space battle of massive proportions. At first glance this particular skirmish seems all set to provide an easy victory for Admiral Tianem's Fleet, but the appearance of a single Mobile Suit piloted by an individual known as Lieutenant Char turns the tide in incredible fashion.

But how did we reach this era of all-out war across the galaxy? Telling that story is where Blue-Eyed Casval's goal truly lies, and thus we're transported back to UC 0068 and the colony of Munzo. With the death of the ruling political party's chairman, Deikun, everything is thrown into chaos as political turmoil and in-fighting spills out into increasingly violent protests amongst the populace out on the streets. Essentially, the conflict boils down to a power struggle between two families - the incumbent Ral family, and the Zabi family who seek to claim what they see as their rightful place at the head of Munzo.

In the midst of all of this turmoil are Deikun's two children, elder son Casval and his little sister Artesia, and with the political landscape set out the second half of this opening episode sees a plan put into action to ensure that they can escape to the safety of Earth before the escalating chaos on Munzo engulfs them and endangers their lives.

The first thing that might strike you upon sitting down to watch this first instalment of The Origin is its visuals, with character designs that invoke a very late-1970s or early 1980s feel (as you might expect from the character designer of the original series, Yoshikazu Yasuhiko) set against a very modern 21st century digital anime production. Thankfully, these unusual bedfellows only feel incongruous for a fleeting moment simply on account of their proving to be such a unique blend of elements, and once you've gotten used to it the overall production values of Blue-Eyed Casval are high and the look of the series actually turns out to be rather pleasing.

Moving on to the actual content of this episode itself, if you view that opening space battle and assume that this is setting the tone for the rest of the instalment then think again - this is merely a teaser for the long-term story of the series, and the remainder of the episode is very much focused upon introducing the characters and politics of the story above all else. This marks Blue-Eyed Casval out as a solid, slow-burner of an episode that only occasionally ignites into action, but it does everything that it sets out to in confident and competent fashion as it weaves an interesting tale that certainly has me ready to watch more once it comes our way, and seems to provide exactly the kind of fare that the Gundam franchise has become renowned for. Admittedly the episode's attempts at humour are a little more hit-and-miss, but these are nonetheless important moments of levity in the midst of all of the political upheaval on show.

Returning to the question of whether The Origin looks like a suitable jumping-on point for Mobile Suit Gundam newcomers, the answer is: yes, for the most part. This opening instalment feels almost entirely self-contained, although some references and phrases are thrown about with the clear assumption that you already know what they refer to - thankfully, the meaning of such phrases tends to be relatively obvious in context, and if you're still baffled it's nothing that a quick Google search won't clear up. This episode probably also gets away with this to some extent due to the sheer weight of cultural osmosis involved - such is the strength of the Gundam name that you'll most likely already know about the concept of the Universal Century or who Char is even if this is your first foray into the universe.

In fact, perhaps the biggest negative we can cite against this episode is the cost of entry - £4.50 for 72 hours access to the episode may feel a little excessive to jump into the series blind on DAISUKI's streaming service (and make sure that you can playback content on the site reliably before you buy!), although we can't fault the presentation of the episode if you plump for that option as we did, even if we wish that both the Japanese and English audio were provided under a single payment option rather than making you shell out for each one individually. Thus, we can't speak to the overall quality of the English dub (as we plumped for the Japanese audio option), but you can check out the first seven minutes for free in either language to try before you buy to some extent.

Then again, the streaming cost is as of nothing against the £70 Collector's Edition on Blu-ray, which will probably only appeal to the true Gundam aficionados. We will admit that it's nice to see an official UK option to get hold of this version, which comes complete with the English and Japanese language tracks together with English subtitles (albeit only for the main feature), and hopefully this is the kind of deal we can see struck more often to grant early physical access to a title where the Japanese release contains English language options.

Ultimately then, Blue-Eyed Casval bodes well for this adaptation of Mobile Suit Gundam: The Origin - I can't speak for how it'll be viewed by hardcore Gundam fans or those with plenty of knowledge about its universe, but as a newcomer it certainly seems to live up to its billing as a great starting point. With some strong characters and a well-realised world of political turmoil there's plenty for this episode to get its teeth into, and its suggestions as to what is to come suggests that things should only get better from here.

Mobile Suit Gundam: The Origin I is available digitally via DAISUKI at a cost of US $6.99

The Japanese Blu-ray Collector's Edition of Mobile Suit Gundam: The Origin I is available to pre-order until April 10th 2015 at a price of £69.99 from Anime Limited

7
A promising start to a series that could just introduce a whole new generation to the world of Gundam.
COMMENT AND DISCUSS
blog comments powered by Disqus